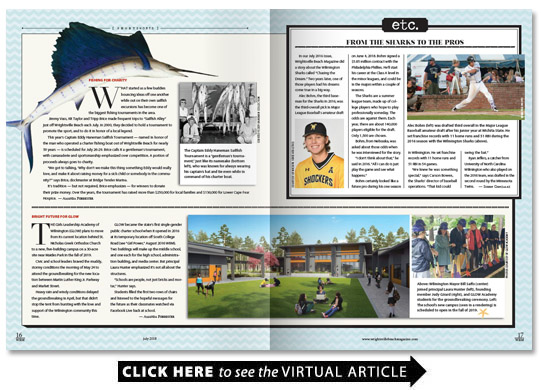 What started as a few buddies bouncing ideas off one another while out on their own sailfish excursions has become one of the biggest fishing tournaments in the area.

Jimmy Vass Kit Taylor and Tripp Brice made frequent trips to “Sailfish Alley” just off Wrightsville Beach each July. In 2000 they decided to hold a tournament to promote the sport and to do it in honor of a local legend.

This year’s Captain Eddy Haneman Sailfish Tournament — named in honor of the man who operated a charter fishing boat out of Wrightsville Beach for nearly 50 years — is scheduled for July 26-29. Brice calls it a gentleman’s tournament with camaraderie and sportsmanship emphasized over competition. A portion of proceeds always goes to charity.

“We got to talking ‘Why don’t we make this thing something Eddy would really love and make it about raising money for a sick child or somebody in the community?'” says Brice dockmaster at Bridge Tender Marina.

It’s tradition — but not required Brice emphasizes — for winners to donate their prize money. Over the years the tournament has raised more than $250 000 for local families and $130 000 for Lower Cape Fear Hospice.

The Girls Leadership Academy of Wilmington (GLOW) plans to move from its current location behind St. Nicholas Greek Orthodox Church to a new five-building campus on a 30-acre site near Maides Park in the fall of 2019.

Civic and school leaders braved the muddy stormy conditions the morning of May 24 to attend the groundbreaking for the new location between Martin Luther King Jr. Parkway and Market Street.

Heavy rain and windy conditions delayed the groundbreaking in April but that didn’t stop the tent from bursting with the love and support of the Wilmington community this time.

GLOW became the state’s first single-gender public charter school when it opened in 2016 at its temporary location off South College Road (see “Girl Power ” August 2016 WBM). Two buildings will make up the middle school and one each for the high school administration building and media center. But principal Laura Hunter emphasized it’s not all about the structures.

“Schools are people not just bricks and mortar ” Hunter says.

Students filled the first two rows of chairs and listened to the hopeful messages for the future as their classmates watched via Facebook Live back at school.

From the Sharks to the Pros

In our July 2016 issue Wrightsville Beach Magazine did a story about the Wilmington Sharks called “Chasing the Dream.” Two years later one of those players had his dreams come true in a big way.

Alec Bohm the third baseman for the Sharks in 2016 was the third-overall pick in Major League Baseball’s amateur draft on June 4 2018. Bohm signed a $5.85 million contract with the Philadelphia Phillies. He’ll start his career at the Class A level in the minor leagues and could be in the majors within a couple of seasons.

The Sharks are a summer league team made up of college players who hope to play professionally someday. The odds are against them. Each year there are about 140 000 players eligible for the draft. Only 1 500 are chosen.

Bohm from Nebraska was asked about those odds when he was interviewed for the story.

Bohm certainly looked like a future pro during his one season in Wilmington. He set franchise records with 11 home runs and 51 RBI in 54 games.

“We knew he was something special ” says Carson Bowen the Sharks’ director of baseball operations. “That kid could swing the bat.”

Ryan Jeffers a catcher from University of North Carolina Wilmington who also played on the 2016 team was drafted in the second round by the Minnesota Twins.