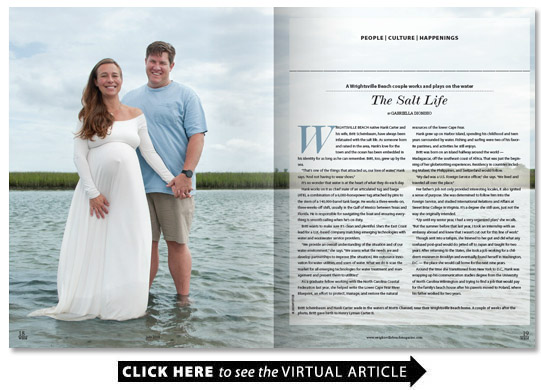 Wrightsville Beach native Hank Carter and his wife Britt Scheinbaum have always been infatuated with the salt life. As someone born and raised in the area Hank’s love for the town and the ocean has been embedded in his identity for as long as he can remember. Britt too grew up by the sea.

“That’s one of the things that attracted us our love of water ” Hank says. “And not having to wear shoes.”

It’s no wonder that water is at the heart of what they do each day.

Hank works on it as chief mate of an articulated tug and barge (ATB) a combination of a 6 000-horsepower tug attached by pins to the stern of a 140 000-barrel tank barge. He works a three-weeks-on three-weeks-off shift usually in the Gulf of Mexico between Texas and Florida. He is responsible for navigating the boat and ensuring everything is smooth sailing when he’s on duty.

“We provide an overall understanding of the situation and of our water environment ” she says. “We assess what the needs are and develop partnerships to improve [the situation]. We outsource innovation for water utilities end users of water. What we do is scan the market for all emerging technologies for water treatment and management and present them to utilities.”

As a graduate fellow working with the North Carolina Coastal Federation last year she helped write the Lower Cape Fear River Blueprint an effort to protect manage and restore the natural resources of the lower Cape Fear.

Hank grew up on Harbor Island spending his childhood and teen years surrounded by water. Fishing and surfing were two of his favorite pastimes and activities he still enjoys.

Britt was born on an island halfway around the world — Madagascar off the southeast coast of Africa. That was just the beginning of her globetrotting experiences. Residency in countries including Malawi the Philippines and Switzerland would follow.

“My dad was a U.S. Foreign Service officer ” she says. “We lived and traveled all over the place.”

Her father’s job not only provided interesting locales it also ignited a sense of purpose. She was determined to follow him into the Foreign Service and studied International Relations and Affairs at Sweet Briar College in Virginia. It’s a degree she still uses just not the way she originally intended.

“Up until my senior year I had a very organized plan ” she recalls. “But the summer before that last year I took an internship with an embassy abroad and knew that I wasn’t cut out for this line of work.”

Though sent into a tailspin she listened to her gut and did what any confused post-grad would do: jetted off to Japan and taught for two years. After returning to the States she took a job working for a children’s museum in Brooklyn and eventually found herself in Washington D.C. — the place she would call home for the next nine years.

Around the time she transitioned from New York to D.C. Hank was wrapping up his communication studies degree from the University of North Carolina Wilmington and trying to find a job that would pay for the family’s beach house after his parents moved to Poland where his father worked for two years.

“I did everything from running private boats selling insurance and working construction ” he says. “I was 25 doing whatever I could to surf and fish and pay the bills.”

He still hadn’t found his niche and while most of his friends were getting married and having babies he pursued a different kind of life change. The journey into a seafaring life commenced when he was accepted to the Marine Institute of Technology and Graduate Studies in Baltimore.

The apprenticeship was no joke. It typically lasts seven years but he opted for an expedited 28-month program with time divided between classroom instruction and training at sea. After completion of the licensing he piloted tugs in New York Harbor before getting a job on the ATB.

“I began as a deckhand ” says Hank who is 35. “I was promoted to chief mate a position I’m very lucky to be in so young.”

The position comes with a lot of responsibility. When the captain is off duty Hank is in charge of the huge vessel.

“It’s the future of tugboating ” he says. “She’s 500 feet long and 80 feet wide. She handles good but there’s definitely challenges. We have the 400-something feet of barge in front of us. It’s a lot of momentum. It takes half a mile to three-quarters of a mile to stop it. You really have to plan ahead. You only want to go as fast as you’re willing to hit the dock. You go slow you look like a pro. You go fast you look like an ass.”

Just like Hank it wasn’t until later in life that Britt’s life calling became clear — although her connection to water came about a bit more humorously.

“I answered an ad in the paper ” she says.

The ad was for a staff liaison position at the Water Environmental Federation a nonprofit that provides technical education and training for water quality professionals.

“I thought ‘Well I need a job ‘ and just went for it ” she says laughingly. “They were looking for someone with editing skills so I think that’s the only reason they hired me.”

But it wasn’t until a trip to Israel that she found her real calling.

The journey to the Middle East began as a vacation. Toward the end of the trip she went to the West Bank and hired a guide to give her an art tour.

“He asked me what I did for a living ” she says. “When I told him I worked in water he said ‘Oh good then you can help us because we don’t have a lot of it.’ It was like a light bulb went off in my head and I knew what I needed to do.”

She began to observe the way the country conserved the precious resource. Droughts mixed with population growth left an already scarce supply in high demand. Water in Israel — or a lack thereof — was a security threat.

“I needed to find a program that would let me focus on the relationship between water and conflict management ” she says. “And Tel Aviv University offered one.”

She had returned to D.C. and was in the process of applying to graduate school in Israel when Hank visited friends in the area. Britt was waitressing at the time and Hank and his friends sat down at one of her tables.

One of his friends left Hank’s cell phone number on the receipt — Britt didn’t find out the source until years later.

“The next morning I woke up and had this text message and was like ‘Why is the waitress from last night texting me?'” he says laughing along with his wife.

They began dating while Hank was finishing up his tugboat licensing and Britt was starting graduate school in Tel Aviv.

“When you have to talk on the phone for a year you really get to know somebody ” Britt says.

They made it work; the couple celebrated their first wedding anniversary in May.

The walls of their Wrightsville Beach home are lined with aerial images of whales boats and the sea promoting a feeling of relaxation and allowing guests to admire the beauty of the picturesque beach town. The photos are Hank’s taken with a drone he purchased in 2016 with the intention of using it to locate fish. He began taking pictures created a company and started a side business.

Before his birth they opted against discovering the gender. It didn’t really matter because one thing was certain: their child will have every opportunity to join Mom and Dad in their love of the salt life.

“I told Britt it doesn’t matter if it’s a boy or girl. I’m going to take it fishing and surfing ” Hank says.