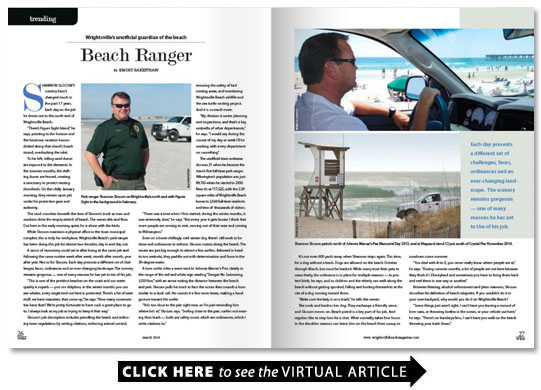 Shannon Slocum’s scenery hasn’t changed much in the past 17 years. Each day on the job he drives out to the north end of Wrightsville Beach.

“There’s Figure Eight Island ” he says pointing to the horizon and the luxurious vacation houses dotted along that island’s beach strand overlooking the inlet.

To his left rolling sand dunes are exposed to the elements. In the summer months the shifting dunes are fenced creating a sanctuary to protect nesting shorebirds. On this chilly January morning they remain open yet under his protective gaze and authority.

The sand crunches beneath the tires of Slocum’s truck as man and machine drive the empty stretch of beach. The waves ebb and flow. Out here in the early-morning quiet he is alone with the birds.

While Slocum maintains a physical office in the town municipal complex this is truly his workplace. Wrightsville Beach’s park ranger has been doing this job for almost two decades day in and day out.

A sense of monotony could set in after being at the same job and following the same routine week after week month after month year after year. Not so for Slocum. Each day presents a different set of challenges faces ordinances and an ever-changing landscape. The scenery remains gorgeous — one of many reasons he has yet to tire of his job.

“This is one of the prettiest beaches on the coast and our water quality is superb — you see dolphins in the winter months you can see whales every single bird out here is protected. There’s a lot of neat stuff we have manatees that come up ” he says. “How many communities have that? We’re pretty fortunate to have such a great place to go to. I always look at my job as trying to keep it that way.”

Slocum’s job description includes patrolling the beach and enforcing town regulations by writing citations enforcing animal control ensuring the safety of bird nesting areas and monitoring Wrightsville Beach wildlife and the sea turtle nesting project. And it is so much more.

“My division is under planning and inspections and that’s a big umbrella of other departments ” he says. “I would say during the course of my day or week I’ll be working with every department on something.”

The unofficial town ambassador was 31 when he became the town’s first full-time park ranger. Wilmington’s population was just 89 765 when he started in 2000. Now it’s at 117 525 with the 2.39 square miles of Wrightsville Beach home to 2 560 full-time residents and tens of thousands of visitors.

“There was a time when I first started during the winter months it was extremely slow ” he says. “But every year it gets busier. I think that more people are coming to visit moving out of their area and coming to Wilmington.”

Even on a bone-chillingly cold winter day there’s still work to be done and ordinances to enforce. Slocum cruises along the beach. The waves are just big enough to attract a few surfers. Adorned in head-to-toe wetsuits they paddle out with determination and force in the 30-degree water.

A lone surfer rides a wave next to Johnnie Mercer’s Pier clearly in the range of the red and white sign reading “Danger No Swimming $250 fine ” with an arrow noting the distance between the beach and pier. Slocum pulls his truck to face the ocean then sounds a horn similar to a duck call. He sounds it a few more times making a hand gesture toward the surfer.

“He’s too close to the pier right now so I’m just reminding him where he’s at ” Slocum says. “Surfing close to the pier surfers not wearing their leash — both are safety issues which are ordinances which I write citations to.”

It’s not even 600 yards away when Shannon stops again. This time for a dog without a leash. Dogs are allowed on the beach October through March but must be leashed. While many trust their pets to roam freely the ordinance is in place for multiple reasons — to protect birds he says and so children and the elderly can walk along the beach without getting spooked falling and hurting themselves at the site of a dog running toward them.

“Make sure the lady is on a leash ” he tells the owner.

She nods and leashes her dog. They exchange a friendly wave and Slocum moves on. Beach patrol is a key part of his job. And regulars like to stop him for a chat. What normally takes four hours in the shoulder seasons can leave him on the beach from sunup to sundown come summer.

“You deal with A-to-Z you never really know where people are at ” he says. “During summer months a lot of people are out here because they think it’s Disneyland and sometimes you have to bring them back and reel them in one way or another.”

Between littering alcohol enforcement and plain manners Slocum describes his definition of beach etiquette. If you wouldn’t do it in your own backyard why would you do it on Wrightsville Beach?

“Some things just aren’t right. I can’t have you leaving a mound of beer cans or throwing bottles in the ocean or your vehicle out here ” he says. “There’s no kumbaya fires I can’t have you walk on the beach throwing your trash down.”

He describes ordinance enforcement and writing citations as “putting on the black hat.” But not everyone gets a ticket. The decision to be good cop or bad cop is entirely situational. Often an offender gets off with a warning. Sometimes he’s addressed this issue before with the same person and therefore a citation is necessary. Alcohol and trash offenses are less likely to be overlooked.

“I’ve basically seen about everything ” he says. “It’s a recreational beach people come from all over. It’s the first beach you hit off I-40 so it really brings in a vast type of people and with that I’ve seen it all.”

He doesn’t disclose too much about what he’s seen but one can only imagine given the sand-kissed barefoot freedom that comes with the beach when the weather is warm. When there’s glistening water on a hot summer day as far as the eye can see and high salt content in the air it makes you forget rules are rules or there are even any ordinances to follow in the first place.

For successes he notes the alcohol ordinance that passed years ago after a particularly crazy July Fourth that left the beach absolutely trashed.

“Tightening up out here with alcohol consumption has led to dividends as far as trash on the beach next to people’s houses and on the street ” he says. “I’m pretty proud of it.”

While he says he’s seen it all in terms of humans some of his most memorable and humorous stories come from the vast amount of wildlife found on or near Wrightsville Beach.

He’s received a flustered call about a 14-foot alligator which turned out to be a manatee. He’s coordinated the rescue of a trapped coyote from under a dock at Seapath Marina. He’s seen a beaver swim to shore from Johnnie Mercer’s and even a few deer these past few years.

“They must have swum over from Landfall; deer do swim contrary to belief ” he says.

While many residents are still enjoying the free parking and quiet stretches of sand and water that this time of year offers Slocum’s preparation for the summer has long begun. But for now he cruises along in the silence and solitude with the never-ending horizon of ocean and waves. This is his office and it’s easy to see why he’s never grown tired of it.

He’s not the good cop or bad cop just the guardian of the beach looking out for its best interest.