More Than Four Days of Fun 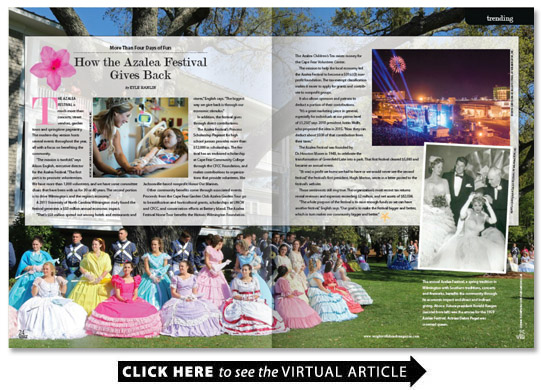 The Azalea Festival is much more than concerts street vendors garden tours and springtime pageantry. The modern-day version hosts several events throughout the year all with a focus on benefiting the community.

“The mission is twofold ” says Alison English executive director for the Azalea Festival. “The first part is to promote volunteerism. We have more than 1 000 volunteers and we have some committee chairs that have been with us for 30 or 40 years. The second portion is to drive Wilmington’s and the region’s economy.”

“That’s $50 million spread out among hotels and restaurants and stores ” English says. “The biggest way we give back is through our economic stimulus.”

In addition the festival gives through direct contributions.

The Azalea Festival’s Princess Scholarship Pageant for high school juniors provides more than $12 000 in scholarships. The festival has an endowed scholarship at Cape Fear Community College through the CFCC Foundation and makes contributions to organizations that provide volunteers like Jacksonville-based nonprofit Honor Our Marines.

The mission to help the local economy led the Azalea Festival to become a 501(c)(3) nonprofit foundation. The tax-exempt classification makes it easier to apply for grants and contribute to nonprofit groups.

It also allows sponsors and patrons to deduct a portion of their contributions.

“It’s a great marketing piece in general especially for individuals at our patron level of $1 250 ” says 2018 president Justin Wolfe who proposed the idea in 2015. “Now they can deduct about $500 of that contribution from their taxes.”

The Azalea Festival was founded by Dr. Houston Moore in 1948 to celebrate the transformation of Greenfield Lake into a park. That first festival cleared $5 000 and became an annual event.

“(It was) a profit we knew we had to have or we would never see the second festival ” the festival’s first president Hugh Morton wrote in a letter posted to the festival’s website.