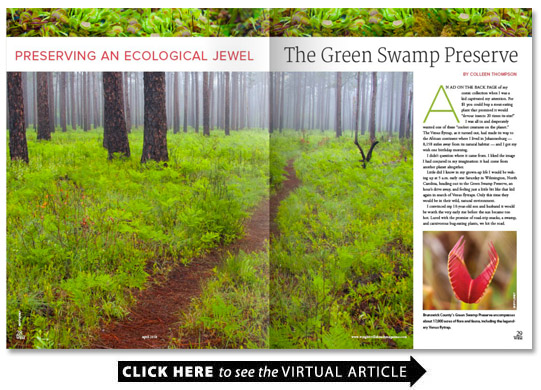 An ad on the back page of my comic collection when I was a kid captivated my attention. For $1 you could buy a meat-eating plant that promised it would “devour insects 20 times its size!”

I was all in and desperately wanted one of these “coolest creatures on the planet.” The Venus flytrap as it turned out had made its way to the African continent where I lived in Johannesburg — 8 158 miles away from its natural habitat — and I got my wish one birthday morning.

I didn’t question where it came from. I liked the image I had conjured in my imagination: it had come from another planet altogether.

Little did I know in my grown-up life I would be waking up at 5 a.m. early one Saturday in Wilmington North Carolina heading out to the Green Swamp Preserve an hour’s drive away and feeling just a little bit like that kid again in search of Venus flytraps. Only this time they would be in their wild natural environment.

I convinced my 10-year-old son and husband it would be worth the very early rise before the sun became too hot. Lured with the promise of road-trip snacks a swamp and carnivorous bug-eating plants we hit the road.

In 1977 Federal Paper Board Co. donated 13 850 acres to the North Carolina Nature Conservancy. A further 2 577 acres were acquired in 2004 and now an area of nearly 17 000 acres in Brunswick County forms a unique environment that the World Wildlife Fund has identified as one of the top 10 eco-regions in North America.

Outside the community of Supply off N.C. 211 the entrance to a small parking lot marks the starting point of a 2-mile walking trail through the Green Swamp Preserve. The path winds through giant longleaf pine savannas wildflowers orchids and carnivorous plants.

After a few minutes figuring out the direction of the trail we set off down our own yellow brick road of sorts following a narrow path through wispy wiregrass and an early-morning mist that added to the enchantment.

“You never know there may be all kinds of creatures living here we know nothing about ” I replied.

We kept walking keeping an eye out for the small red diamond shapes painted on wooden posts that marked the trail. The sound of the Saturday morning traffic from the highway slowly faded away.

The name “Green Swamp” is a little misleading. There’s no permanent black water or cypress trees. Instead some 13 000 acres are pocosins.

The word pocosin comes from the Native American Algonquian language and means “swamp on a hill.” Essentially it’s a wetland bog with sandy peat and woody shrubs. They form over hundreds of years as leaves pine needles and sticks saturated with water slowly decay to form peat. The peat becomes a giant sponge that absorbs water from rainfall and then slowly releases the water to form a bog.

It is on the edges of these pocosins that the magic happens.

An elevated slippery wooden walkway led us under a canopy of trees and shrubs like gallberry titi and sweetbay — all rooted in a sink of mud and water. The warm air thick heavy and vegetal added to the feeling that we had stumbled into an enchanted place the likes of which we had never seen before.

We sensed that if we quickened our pace too much we might miss something extraordinary. Huge glistening webs flanked our path. Vivid green lynx spiders with fancy spotted black white and yellow legs eyed us as we observed their primeval world. The tangled understory of vines and shrubs is a haven for a multitude of creatures including of course the exotic Venus flytrap.

It is in this small sanctuary that it lives and thrives. Its very picky habitat and quirky needs — like sandy nutrient-poor soil that changes from wet to dry — has confined them to a 75-mile radius around Wilmington with fewer than 35 000 now living in the wild.

British naturalist Charles Darwin famously described the Venus flytrap as “one the most unusual and wonderful plants” he had ever encountered anywhere in his global travels. He was so entranced by them that he dedicated an entire book to insect-eating plants which he partially illustrated himself.

Our own first sighting of these carnivorous bug-eating wonders was a cluster of tiny green gems we almost walked right past. They would be the only Venus flytraps we managed to see all day as if they had made an appearance just for us. I learned afterward that they are particularly difficult to spot in the wild.

Continuing on through the knee-high wiregrass that blankets the vast open spaces of the savanna we were greeted by clusters of tall carnivorous pitcher plants. Their tubular leaves shaped like small trumpets with distinctive red veins serve as nectar paths for potential prey luring them deeper into a trap.

Along the edges of the savanna were small bright-yellow sticky rosettes called butterworts which trap insects and then digest them using enzymes secreted by their leaves. Genius.

By the end of our walk we had sunk knee deep into squelchy mud; been led astray by flitting Hessel’s hairstreak butterflies; captivated by butterworts and bladderworts; mesmerized by bejewelled sundews; and watched what looked like a choreographed performance by blue darter dragonflies.

Under the longleaf pines I stood quite still taking in the evocative image the pure immensity of it all. I was reminded of author Peter Wohlleben’s advice in “The Hidden Life of Trees”: “Slow down breathe deep and look around.”

I knew little of the magnitude of the ecosystem I was walking through when I started out. I had gone in search of a childhood plant that had captured my imagination and was native to this small corner of the world. What I discovered along the way was an ecological jewel — a fascinating world filled with creatures that have been around for eons and the deep satisfying feeling of a Saturday morning well spent.

Angie Carl from the Nature Conservancy a nonprofit organization with a chapter in Wilmington is directing a multi-year restoration project in the preserve. The end goal is to recreate robust longleaf forest savannas like the ones that existed long before development.

“We don’t want people to be concerned if they see logging ” she says. “We’ve got more than a decade of research in the swamp to show us what we need to do to restore the forest.”

Some species have become endangered as longleaf dwindled. This list includes the red-cockaded woodpecker which makes its home almost exclusively in old longleaf pine trees.

Much of the preserve was owned and managed by Federal Paper Board until the company donated it to the conservancy in 1977.

“The company planted slash pine as a source for pulp to make paper ” Carl explains. “We want to remove most of the slash pine and plant longleaf pine trees.”

For the past decade the conservancy has contracted with a researcher who has been studying research plots at the south end of the preserve to determine what works best for longleaf restoration.

“These longleaf pine ‘fire forests’ depend on fire the way rain forests depend on rain ” Carl says. “We have pine trees whose cones only open due to the heat of a burn. We have grasses that only flower after a spring or summer burn. The preserve has all the makings of a longleaf forest including the groundcover that is necessary to move fire through the forest. Our research has shown that those plants are in the seedbank just waiting for sunlight to start sprouting.”

The restoration could take years because it can only be done in dry times to minimize the effect of heavy equipment on the forest floor. Because the restoration is dependent on weather conditions the conservancy doesn’t have a timeline for when it will end. The preserve trail will remain open throughout the restoration.

The poaching of Venus flytraps has become such a problem that conservationists are concerned that it could endanger the plant’s existence. There are currently as few as 35 000 in their natural habitat the North Carolina History Project states.

The plant became protected by North Carolina state legislation in 1956 but poachers have trolled forest floors for decades. They can easily collect 1 000 tiny plants in one sweep and sell them for $30 each on the black market.

“Poaching is still occurring on the sites ” Carl says. “Anecdotally it seems to have slowed down a little after the first published arrest. But the numbers are definitely not recovering at this time. We are currently funding annual population counts.”

Four North Carolina men made national headlines in 2015 when they were caught with 970 Venus flytraps — 3 percent of the entire natural population — and were charged with felony poaching. As the number and size of flytrap populations decline the survivors face continued multiple threats of habitat loss from development further poaching and outbreaks of disease.

The Venus flytrap has received the conservation status of “vulnerable ” which is just one step below “endangered.” In October 2016 botanists from the University of Wisconsin-Madison filed an emergency petition with the U.S. Fish and Wildlife Service. The petition asked for the Venus flytrap to be classified as endangered. The petition’s status is currently listed as “active” by the wildlife service.