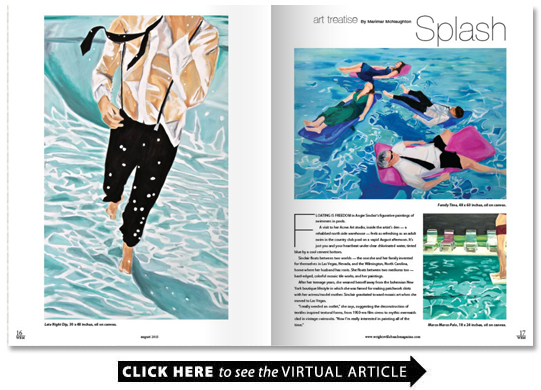 Floating is freedom in Angie Sinclair’s figurative paintings of swimmers in pools.

A visit to her Acme Art studio inside the artist’s den — a rehabbed north side warehouse — feels as refreshing as an adult swim in the country club pool on a vapid August afternoon. It’s just you and your heartbeat under clear chlorinated water tinted blue by a cool cement bottom.

Sinclair floats between two worlds — the one she and her family invented for themselves in Las Vegas Nevada and the Wilmington North Carolina home where her husband has roots. She floats between two mediums too — hard-edged colorful mosaic tile works and her paintings.

After her teenage years she weaned herself away from the bohemian New York boutique lifestyle in which she was famed for making patchwork skirts with her actress/model mother. Sinclair gravitated toward mosaic art when she moved to Las Vegas.

“I really needed an outlet ” she says suggesting the deconstruction of textiles inspired textural forms from 1950-era film sirens to mythic mermaids clad in vintage swimsuits. “Now I’m really interested in painting all of the time.”

Sinclair models the figures in her art from photographs of family members including her children.

“Both of my kids were competitive swimmers in Las Vegas so for years since they were little I was taking them to the swim meets and the pools and for maybe four hours every day including Sundays they were swimming. I was always looking at water patterns and splashes ” she says. “I was so fascinated by the shadows…the reflections.”

In painting her work is fluid. Movement is implied in compositions small and large — in a trio of square oils loosely titled: “Almost There ” “Close ” “Drifting ” in which the swimmer is submerged — and in the swirl of water and flourish of bubbles seen in larger works like “Swim Around” and “Miss Flo.”

In “Water Lily ” a swimmer’s face floats to the surface hair tucked neatly under a white bathing cap. The placement of an arm suggests she’s mid backstroke while her torso sheathed in a red one piece disappears and re-emerges.

“I like the freedom. I like the peacefulness of it the calmness of the pieces as well ” Sinclair says.

Sometimes it’s about the brushstroke the warmth of skin tones amid water colors that draws Sinclair to love her own work that began some years ago when she posed family members fully clothed on hot pink inflatable rafts on a swimming pool surface. “Family Time ” a 5- by 6-foot canvas was the illustration for her Christmas card that year. It’s a whimsical relaxing composition that launched the body of work she expects will keep her hand moving for a while longer.

Sinclair is exhibiting now at Cheryl McGinnis Gallery’s Sherwin Williams installation in New York City; All About Art on Bald Head Island; and New Elements Gallery in Wilmington where her work was recently juried into representation.

“Initially we were excited about her mosaic work ” says gallery owner Miriam Oehrlein. “Her work is really beautiful. . . . The water the reflections there’s something very soothing.”