Savor: The Tastes of Honey 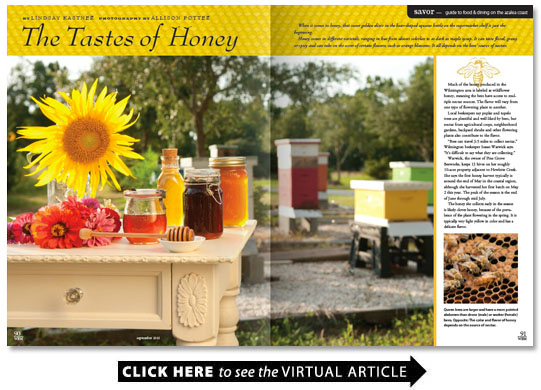 When it comes to honey that sweet golden elixir in the bear-shaped squeeze bottle on the supermarket shelf is just the beginning.

Honey comes in different varietals ranging in hue from almost colorless to as dark as maple syrup. It can taste floral grassy or spicy and can take on the scent of certain flowers such as orange blossoms. It all depends on the bees’ source of nectar.

Much of the honey produced in the Wilmington area is labeled as wildflower honey meaning the bees have access to multiple nectar sources. The flavor will vary from one type of flowering plant to another.

Local beekeepers say poplar and tupelo trees are plentiful and well liked by bees but nectar from agricultural crops neighborhood gardens backyard shrubs and other flowering plants also contribute to the flavor.

“Bees can travel 3-5 miles to collect nectar ” Wilmington beekeeper Susan Warwick says. “It’s difficult to say what they are collecting.”

Warwick the owner of Pine Grove Beeworks keeps 13 hives on her roughly 10-acre property adjacent to Hewletts Creek. She says the first honey harvest typically is around the end of May in the coastal region although she harvested her first batch on May 2 this year. The peak of the season is the end of June through mid July.

The honey she collects early in the season is likely clover honey because of the prevalence of the plant flowering in the spring. It is typically very light yellow in color and has a delicate flavor.

“You can almost taste the flower nectar ” Warwick says.

As the year progresses her bees’ honey tends to take on a darker color and deeper less-sweet flavor. She attributes this at least in part to a prevalence of goldenrod blooms.

“The bees love it ” she says. “It gives the honey almost a spicy kick. It’s pretty interesting.”

David Bridgers who began keeping bees in 1969 and now has close to 200 hives mostly in Wilmington and Hampstead indicates there used to be more defined honey seasons depending on what was blooming in spring and throughout the summer.

“We’re so urbanized and people have so many flowers in their yards that there’s now a constant nectar flow ” Bridgers says.

When the New Hanover County Beekeepers Association held a taste test earlier this year the two top-ranked honeys both came from hives in downtown Wilmington. Association President Ashley Stephenson says the diversity of flowering trees downtown might have contributed to a particularly well-rounded flavor.

From time to time hives in North Carolina’s Coastal Plain region have been known to produce an especially sweet blue- or purple-tinged honey. Theories abound about the cause of the elusive hue. Some credit huckleberries others say the cause is purple kudzu flowers. A scientist who studied the issue in the 1970s determined the honey came from plants with a higher than usual aluminum content.

Away from the coast sourwood honey — a varietal from bees that feed on the sourwood tree blossoms — is known for its smooth taste.

“Sourwood to me tastes almost like it’s buttery ” says Randall York a beekeeper based in Charlotte who operates Cloister Honey along with his wife Joanne Young.

Most of the honey he sells is wildflower honey from the Charlotte area but he also sells tupelo honey from Florida with a flavor he describes as very clean and floral.

Whatever the flavor honey can be used to prepare delicious meals. When using it as a glaze Young recommends waiting until the end of the cooking time.

“Then you don’t lose any of the integrity of the honey ” she says.

Baking with honey is trickier.

“It is not only a sweetener but it is also a liquid ” Young says. “So you really need to adjust the liquid. There’s not one easy answer.”

Honey can be stored almost indefinitely though it sometimes darkens and changes flavor over time. It will also eventually crystalize — some varieties faster than others — but if gently warmed will return to its liquid state.

In addition to its culinary appeal honey has long been touted for its health benefits.

Ed Hutchison’s favorite use is to simply spread it on hot biscuits but he also donates honey to the Karen Beasley Sea Turtle Rescue and Rehabilitation Center in Surf City where it was used to treat a wounded turtle that was not responding well to antibiotics.

“It made all the difference in the world ” says Hutchison who has been in the bee business for about 50 years. “I’m not saying it’s a cure-all for everything but it does help.”

Honey can also soothe a sore throat (just don’t give it to babies less than 1 year old — they’re at risk for botulism) and many allergy sufferers sing the praises of local honey. A popular belief states regular exposure to small amounts of pollen helps to reduce allergy symptoms although a 2002 University of Connecticut study refuted those claims.

“I’m probably the only beekeeper in North Carolina that will tell you this — or in the entire U.S. ” he says. “I do not believe that eating honey will alleviate allergies.”

When it comes to the benefits of bees honey is just the start Hutchison says. The bee’s role as a pollinator is far more important and what first drew him to beekeeping all those years ago.

“Honeybees are more beneficial than most people realize ” he says.

•  In addition to honey bees produce wax and a glue-like substance called propolis that has antibacterial and anti-fungal properties.

• There are properties of honey that are not scientifically understood.

In a medium bowl combine flour baking soda and salt. Mix well with whisk to combine. In a separate large bowl combine the chai tea yogurt honey and vanilla extract. Add the dry ingredients to the wet ingredients. Mix until no lumps remain. Fold in the figs and pecans.

Pour the batter into the prepared pan. Smack the pan on the counter to let air bubbles escape.

Bake 20-30 minutes or until a toothpick inserted in the center comes out clean.

Allow to cool 15 minutes before removing from the pan. Cool completely before slicing.

Add all ingredients to a medium saucepan. Whisk to combine. Turn on medium heat bring to a low boil and reduce to a simmer uncovered for 30 minutes for a thin sauce or one hour for thick sauce. Keep and eye on it and stir as needed.

In a medium bowl combine melted butter and honey. Add cinnamon stir to combine. Mix in pecans stir well and make sure pecans are coated. Preheat oven to 400 degrees. Bake for 5-7 minutes. Be sure not to burn them.

Send us your favorite recipes! Send to: [email protected]