BY Gil Burnett as told to Henry Burnett 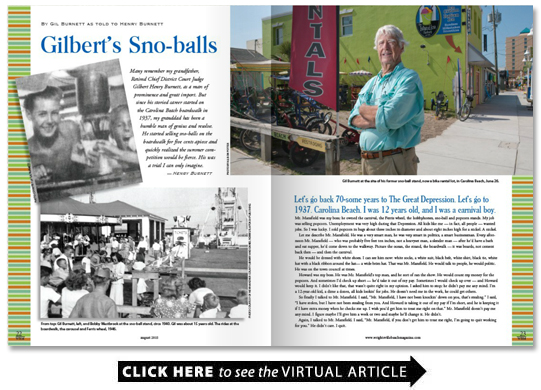 Many remember my grandfather Retired Chief District Court Judge Gilbert Henry Burnett as a man of prominence and great import. But since his storied career started on the Carolina Beach boardwalk in 1937 my granddad has been a humble man of genius and resolve. He started selling sno-balls on the boardwalk for five cents apiece and quickly realized the summer competition would be fierce. His was a trial I can only imagine.

Mr. Mansfield was my boss; he owned the carnival the Ferris wheel the hobbyhorses sno-ball and popcorn stands. My job was selling popcorn. Unemployment was very high during that Depression. All kids like me — in fact all people — wanted jobs. So I was lucky. I sold popcorn in bags about three inches in diameter and about eight inches high for a nickel. A nickel.

Let me describe Mr. Mansfield. He was a very smart man he was very smart in politics a smart businessman. Every afternoon Mr. Mansfield — who was probably five feet ten inches not a heavyset man a slender man — after he’d have a bath and eat supper he’d come down to the walkway. Picture the ocean the strand the boardwalk — it was boards not cement back then — and then the carnival.

He would be dressed with white shoes. I can see him now: white socks a white suit black belt white shirt black tie white hat with a black ribbon around the hat– a wide brim hat. That was Mr. Mansfield. He would talk to people he would politic. He was on the town council at times.

Howard was my boss. He was Mr. Mansfield’s top man and he sort of ran the show. He would count my money for the popcorn. And sometimes I’d check up short — he’d take it out of my pay. Sometimes I would check up over — and Howard would keep it. I didn’t like that that wasn’t quite right in my opinion. I asked him to stop; he didn’t pay me any mind. I’m a 12-year-old kid a dime a dozen all kids lookin’ for jobs. He doesn’t need me in the work he could get others.

So finally I talked to Mr. Mansfield. I said “Mr. Mansfield I have not been knockin’ down on you that’s stealing.” I said “I have stolen but I have not been stealing from you. And Howard is taking it out of my pay if I’m short and he is keeping it if I have extra money when he checks me up. I wish you’d get him to treat me right on that.” Mr. Mansfield doesn’t pay me any mind. I figure maybe I’ll give him a week or two and maybe he’ll change it. He didn’t.

Again I talked to Mr. Mansfield. I said “Mr. Mansfield if you don’t get him to treat me right I’m going to quit working for you.” He didn’t care. I quit.

In the carnival were sno-balls. Now sno-balls are shaved ice back then in a white V-shaped cup with syrup over it might be strawberry or cherry syrup. And the ice was shaved by hand. You had a little scraper you put the cup in it and you scraped it like a big razor blade scraped over a block of ice. So when you pull it it shaves and the ice backs up. But later they made machines that would shave it.

Our stand was under the big dance hall which burned about 1939 or ’40 a lot of Carolina Beach burned back then. This stand was next to a bathhouse and other shops. Mr. Mansfield ? had a sno-ball stand built right across the boardwalk from me about 25 feet from me. It didn’t take much to build one — just a few boards put together and that was it and an umbrella as I recall. His salesman started giving sno-balls away. I could not sell one sno-ball. I had gotten his attention but he was gonna drive me out of business.

By this time I’m still twelve and the summer’s getting later and my partner decides to leave– the kid has to go to school just like I have to in a few weeks the son of the other owner of the two sno-ball stands. So we close this sno-ball stand and I move to the other one which is about a block away between the ocean and the highway. And Mr. Mansfield built a sno-ball stand across from me there. He knew we were going to court if he did anything illegal so he put his best salesman on this sno-ball stand to run me out of business. I knew it was root hog or die.

Well young ladies 11 12 years old come to the beach for a week with their parents and that sort of thing and they walk around and some of them would stop at the sno-ball stand and chat a little bit.

So finally I thought: “I’m gonna get some young ladies every afternoon and pay ’em with sno-balls. Get two two a day and one would go up toward the ocean and one would go down toward the street but both would stay on this boardwalk where they could see the stand and tell every person who they saw that the best sno-balls and this was the truth the best sno-balls on Carolina Beach were Gilbert’s right over there. They’d point to where the stand was.

We had stuff in our syrup that the others didn’t have. It was a citric acid it gave a twang to the flavor that the others didn’t have. It was citrus — a citrus twang like you might eat an orange and have a slight just a slight bit of orange flavor in the cherry syrup. We had four: grape cherry strawberry orange — but the cherry and the strawberry were by far the most popular. So we ended up really with those two. I think the most I ever sold when I just had sno-balls was $104 worth at a nickel apiece which was over 2 000 sno-balls.

Now I might add this. I started selling sno-balls for a nickel in one of the little stores after the war. In this place I had more than sno-balls. I had crackers drinks and all that sort of stuff but sno-balls were still a nickel. But some other people had some sno-balls down there after the war and had had them during the war. They did not know my history down there.

I said “You can tell your friends that I was down here long before you were and I actually will sell sno-balls for a dime but if some kid comes here and wants a nickel sno-ball he’ll always be able to get it.”

Later when he had a family to support Granddad bought an owner-financed hosiery mill which lightning struck and burned to the ground in 1952. The mill was under-insured. To keep his sanity he built a sailboat and sailing became a lifelong passion. When the boat was finished he went to Wake Forest Law School and graduated third in his class.

I never knew my granddad as businessman or sailor or lawyer or judge. For so long he was just another retired old man with a dry wit and a sharp sense of humor. But these stories like countless others he repeated while I was growing up have etched his earlier years in my mind with great detail. Having heard them so many times they will hardly be forgotten. My granddad whose 90th birthday is August 7 lives a remarkable life. And he will live on in my memory forever.