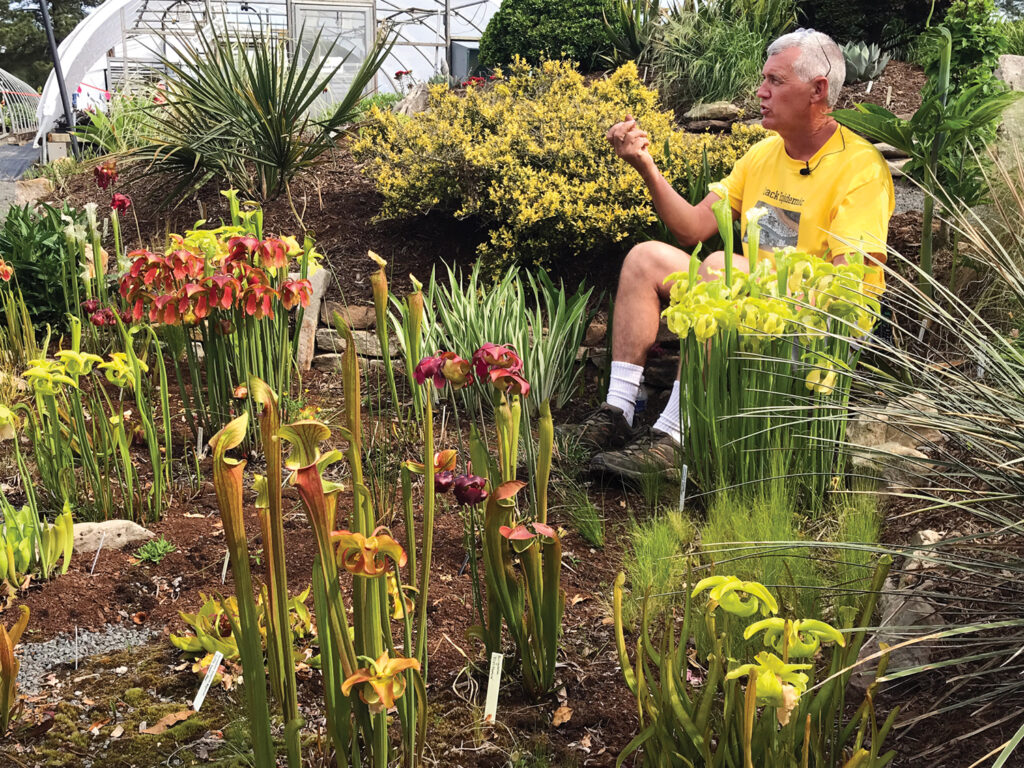 As plantsman and founder Tony Avent explains, Juniper Level Botanic Garden is a 28-acre idea, research station, and conservation garden. He started the garden on two acres of loamy tobacco land just south of Raleigh in 1988. He and his now-deceased wife Michelle bought adjoining property and grew the garden.

Avent is a bit like Willy Wonka in that he isn’t constrained by a limited imagination. Many gardeners, he says, should look and think beyond what they see their neighbors doing and should expand their plant and garden borders.

“People have no earthly idea what they can do if you just let your mind get out of the way. We want people to come and see what 27,000 types of different plants look like,” says Avent, who gifted the garden to his alma mater, NC State, four years ago.

It is free but only open to the public eight weekends each year, or by special appointment. The 2022 open dates began the weekend of February 25-27 and continue March 4-6, April 29-May 1, May 6-8, with four other dates later in the year.

The Avents totally changed the topography of the property by moving 600 dump truck loads of soil from one end to another to clear the way for over a dozen greenhouses. The relocated soil was used to create berms and build a 20-foot “mountain” in the rambling garden. They also had a waterfall and pond placed on the property.

The garden is relaxed and free flowing without a lot of traditional design. It features distinct sections, including a bog, a grotto, Southwest succulents, hardy tropicals, a crevice garden, and several perennial and mixed borders.

Visual appeal is certainly part of the reason to drive a couple of hours from New Hanover County for a visit, but there’s more to it than that.

“Our mission is a little different than most places you will find. It is about collecting the plants, studying, sharing, and about conserving the plants,” Avent says. “Throughout history, humanity has shared plant germplasm. That’s how we eat. Most of our medicines come from plants, so preserving plants is huge.”

His plant foraging expeditions have included nearly 100 trips throughout the Americas and to Thailand, Montenegro, China and Bosnia, to name a few of the countries he has visited.

Two of the prized items growing on his mountain, which is about 350 feet above sea level, are a Ben Franklin tree and a red spruce. The Ben Franklin tree, originally from Georgia, is extinct in the wild and the red spruce is usually only found at elevations of 5,000 feet.

“Red spruce is rumored not to grow down here, but because we built our mountain and we grow it on the slope, it is growing beautifully,” Avent says.

Experimentation and research are main aspects of the garden. That includes learning how plants live and thrive by finding out what kills them.

“In the 35 years we’ve been here, we have killed just over 50,000 different types of plants,” he says. “We learn by killing. We don’t view those as failures, we view those as learning experiences. Our goal is to kill them ourselves and learn, so our customers don’t have to.”

Avent and his team enjoy sharing their knowledge during the open garden dates. They are on hand to guide, suggest, and even do a little myth busting.

“We think of ourselves as the Myth Busters of horticulture. Give us a good myth, we’ll bust it. You hear, ‘Plants grow in the wild where they grow their best.’ That is a classic myth that absolutely is untrue,” Avent explains.

One such myth-busting experiment is the crevice garden, where all the plants grow in pure gravel two to three feet deep without any soil.

“Because if they had any soil they would die,” he says. “They are so sensitive to moisture; these are things from the Middle East, the Mediterranean, areas like that. We even dug plants out of our native soil, shook the dirt off, put them in our crevice, and they are growing as good or better as they did in the native soil.”

The conservation of plants is a constant theme.

“There are 434,000 species of plants on earth today; 36.5 percent of those are endangered or threatened with extinction,” Avent says. “Think about those numbers. That’s why conserving these plants is critical. They can’t get up and move, we have to move them ourselves to a habitat and spread them around. The more we can spread them around the world, the better chance that plant has to survive somewhere.”

Gardeners, explorers and plant lovers will also enjoy the nursery, which suggests several specialty themes such as a Chocolate Garden, with plants that smell like chocolate or are chocolate colored. Another, the Night Garden, suggests plants that will perfume the night air and create sound as the wind blows through them.

Like Willy Wonka, the garden does not welcome misbehaving children or animals due to the nature and fragility of its one-of-a-kind plants. Visiting rules and suggestions can be seen at JLBG.org or PlantDelights.com.