A Colony of Creation 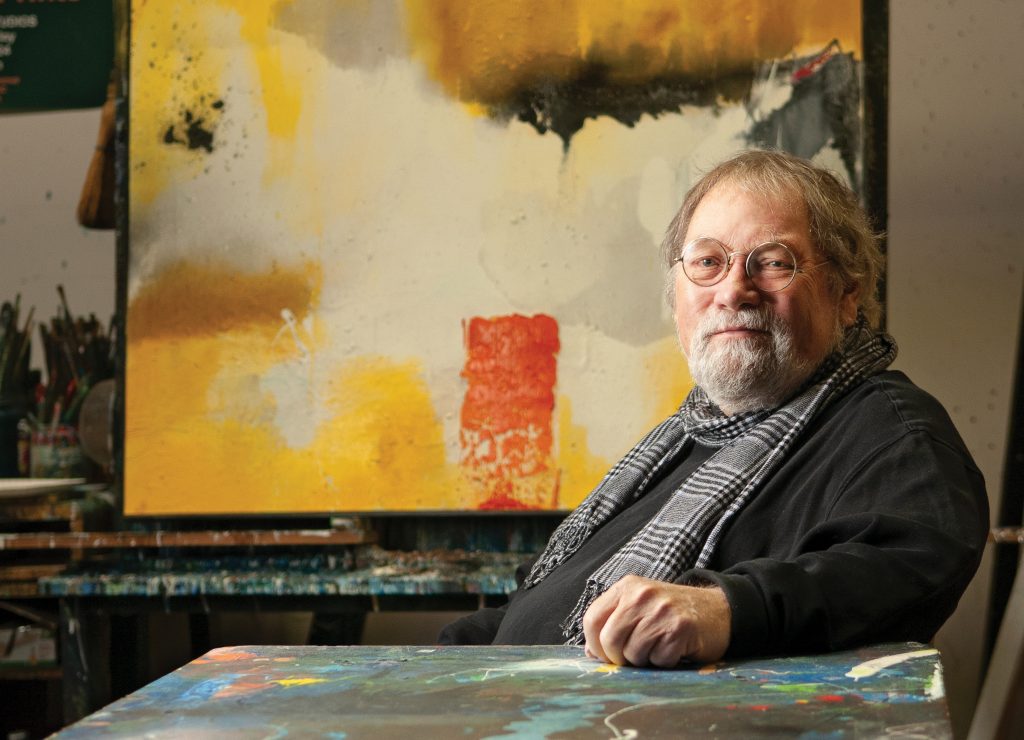 Dick Roberts co-founded Acme Art Studios in downtown Wilmington with six other artists in 1991. The large easel in his space there supports Helios, a 47 x 47 inches oil and mixed media piece. Allison Potter

Imagine standing on a hill, looking at the shades of blue in the sky and listening to the wind rustling about a golden landscape. Or being at a monastery on Osogovo Mountain in Macedonia, where you are spreading your friend’s ashes across the meadow you once hiked together.

A viewer can look at a Dick Roberts’ painting from a variety of perspectives; that’s the beauty of abstraction. Yet when you hear his stories or envision a sheetrock scraper (his favorite “brush”) thick with oil paint against canvas, they seem to form their own narrative of an artist far into his career and accomplishments, yet still creating.

“I’ll make an odd amount of marks on the canvas, maybe three or five, then the next step is I respond to those. At this point, there’s no concept or plan to what the painting is going to be,” Roberts says while sitting in his workspace at Acme Art Studios in Wilmington. “I think the natural world, the motion of the natural world, the way water moves or the sun sets, those are all influences.”

Roberts, the co-founder of Acme, seems to find his way making art among other artists including, memorably, Macedonian painter Sergej Andreevski.

They met during Roberts’ first residency at the international art colony held at the Saint Joachim of Osogovo Monastery in Kriva Palanka, Macedonia, in 1987. Andreevski, described as a class clown type, burst into Roberts’ studio one night declaring they would paint a picture together, tomorrow.

The next day, a shy Roberts, with brushes and paint in tow, showed up to a full-blown audience.

“I walked to an open area in the monastery,” Roberts says. “There was a big canvas on the ground and Sergej was there with all of his stuff. He leaned down and made marks on the canvas and I responded. He went, and I went. Almost like playing jazz, you respond to the guy before you and something comes of it and grows.”

An hour passed. The painting seemingly was complete when Roberts covered his body in white gesso paint and placed himself on the canvas. He recalls the crowd applauded but Roberts, so wrapped up in the creation itself, didn’t know what would happen or come of the meeting.

The following year, he debuted 40 pieces of his body print series at the National Museum in Struga, Macedonia. While it’s safe to assume the impromptu experience at the Osogovo Monastery could be an influence, he also sought to understand contrast.

“Unlike my normal paintings, the body prints were inspired by prehistoric cave art, the colors of the walls, the black of the smoke, the yellow and red and ocher of the paint, the drama of the use of white,” he says. “I used white rolled naked people to print on pre-painted paper, skin being the largest sensory organ and the most relatable.”

Roberts’ time in Macedonia set the groundwork for co-founding the No Boundaries Art Colony with Pam Toll and Gayle Tustin in 1988, when he was working full time as the curator of exhibits at the North Carolina Aquarium at Fort Fisher. The job allowed him to practice and exercise some of his favorite elements of creating — color and composition. Yet he still wanted to give back from his experiences abroad.

Roberts, Toll and Tustin were gifted the use of three former lightkeepers’ residences on Bald Head Island. They secured funds based on pre-selling paintings that would come from resident artists. The artists only paid their airfare, with everything else provided.

Twelve international artists participated in the first No Boundaries Art Colony, which is still in operation today (the 2020 edition was a virtual retrospective because of the pandemic).

Roberts is at his most creative when surrounded by like minds. From the 23 fully occupied studio spaces at Acme to his second home in Sloestica, Macedonia, (which also serves as a grouping of buildings for Andreevski’s Art Point-Gumno residency), he stresses the importance of a collective.

The works that were featured in “Tributaries of Abstraction,” his recent exhibition at Acme, elicit an all-consuming feeling of being pulled into the creative vehicle, the element of both making and observing.

“August 28” is like a sunset screaming out. There are deep burgundy and black tones contrasted by salmon pink and mustard yellows. A bellowing white seems to reach up. It is abstraction with a center.

In “Greenpiece,” strong horizontal strokes in beige invoke a hollowed-out sky while dark greens, blues and yellows establish a sense of recognition. Roberts’ favorite hue, blue, is on full display in the aptly named, “The Blues” and “Blue July.”

It is easy to form connections in his work to the Osogovo Monastery. Encircled in the towering greenery of the mountains, the monastery has had a profound effect on both his art and intrapersonal relationships.

French painter Michel Raby, Roberts’ first roommate there (and a three-time participant in the No Boundaries colony), died unexpectedly in 2004. An organization of artists met in Macedonia following his death.

“We hiked up the mountain — Michel and I did a lot of walking up the mountains when we were together — to this meadow that we had been before,” Roberts says. “That’s where we made a circle and shared something about Michel. Then Noel [Raby’s partner] took the pot with the ashes and broke it. They scattered around, then she gave every one of us a piece of the pot and that was our funeral.”

Meadows, mountains, flat vistas or sweeping views seem to dominate the forethought and afterthought when looking at Roberts’ work. The color palette is a rough draft to a story. Some paintings are vibrant and in motion; others stand still with a chapter-ending sense of being on top of that meadow and saying goodbye.

“I’ve always favored abstraction,” Roberts says. “If I got started on something, even as a kid, if I messed with it long enough it would become more abstract than realistic. If you think about it, everything is abstract. Even a fine realistic painting is abstract because it’s not the thing.”

He will spend anywhere from five to 10 sessions on a painting, layering brushstrokes that later form a total body of work. Sometimes he even mixes Wrightsville Beach sand into his paint. When satisfied with his work, he turns the canvas to the wall.

From the start of his career to now, Roberts continues to take chances, impromptu and provoked. Last year found him both retreating yet creating, birthing new diorama-style works including “Children in Cages” and “Living with the Virus,” using catbrier from his own backyard near Greenfield Lake.