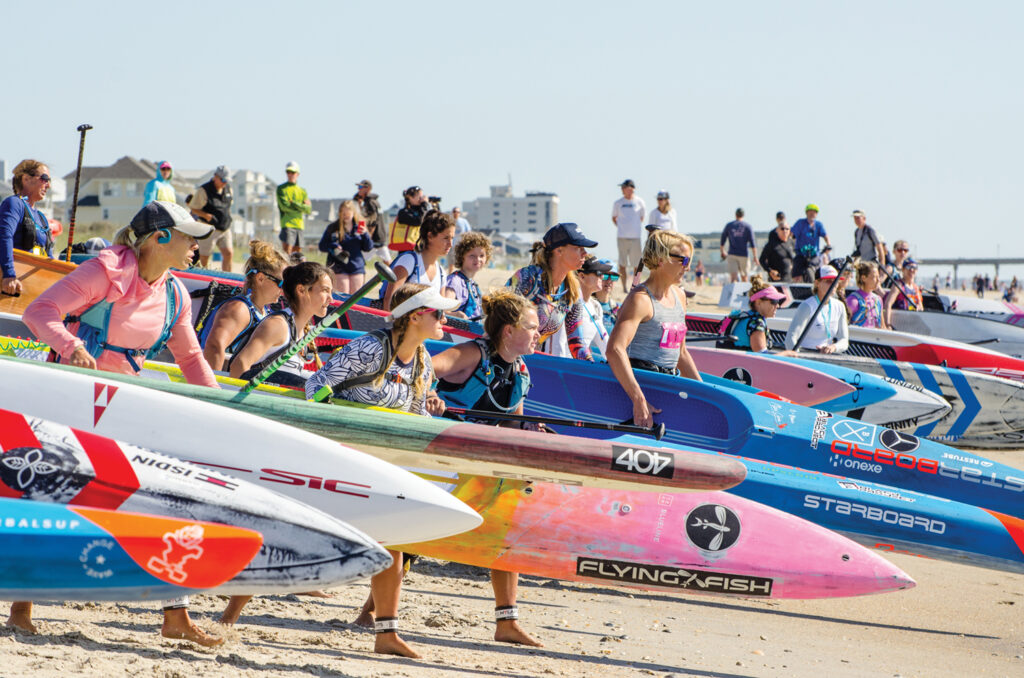 Competitors line up oceanside for the start of the Carolina Cup’s Graveyard race in 2019. Photo by Laura Glantz

Wrightsville Beach and the sport of paddle boarding take the world stage in November. The Carolina Cup, celebrating its 10th year, has been selected as the only stop of the Association of Paddlesurf Professionals (APP) 2021 World Tour.

The Carolina Cup originally was scheduled to be the opening event, but the rest of the tour is now canceled, and Wrightsville Beach will be the one and only stop. The Carolina Cup is scheduled for Nov. 4-7 at the Blockade Runner Beach Resort.

Among the many athletes coming to town will be April Zilg, a North Carolina native who is ranked second in the world. Zilg, who learned how to paddle in the waters in and around Wrightsville Beach, moved to California in 2017. She is returning for the Carolina Cup’s infamous Graveyard race, a brutal 13.1-mile course.

“It’s an excellent test of a paddler’s all-around skills, and mother nature doesn’t always play nice,” Zilg says. “Outside of some of the dedicated surf-zone races, the Graveyard race is up there for difficulty, especially if you end up battling a stiff tide. It’s also a half-marathon distance, so the grind is real.”

The Carolina Cup was created by the Wrightsville Beach Paddle Club in 2011. This year’s event will consist of seven races over four days. The Graveyard is the most popular.

“It got the attention of elite athletes because of the challenge of flat water, inlet and ocean paddling that provide all skills of terrain for a proficient paddler. Wrightsville Beach has it all,” says Mark Schmidt, Wrightsville Beach Paddle Club race director. “I love that we have athletes from around the world come to race and, once they come here, they really enjoy the area.”

Casper Steinfath of Denmark, the reigning world champion in the men’s division, will also be competing as will French paddler, Arthur Arutkin, who is ranked second in the world, and seventh-ranked Titouan Puyo of New Caledonia.