Design first, shovels second, and then “all aboard” 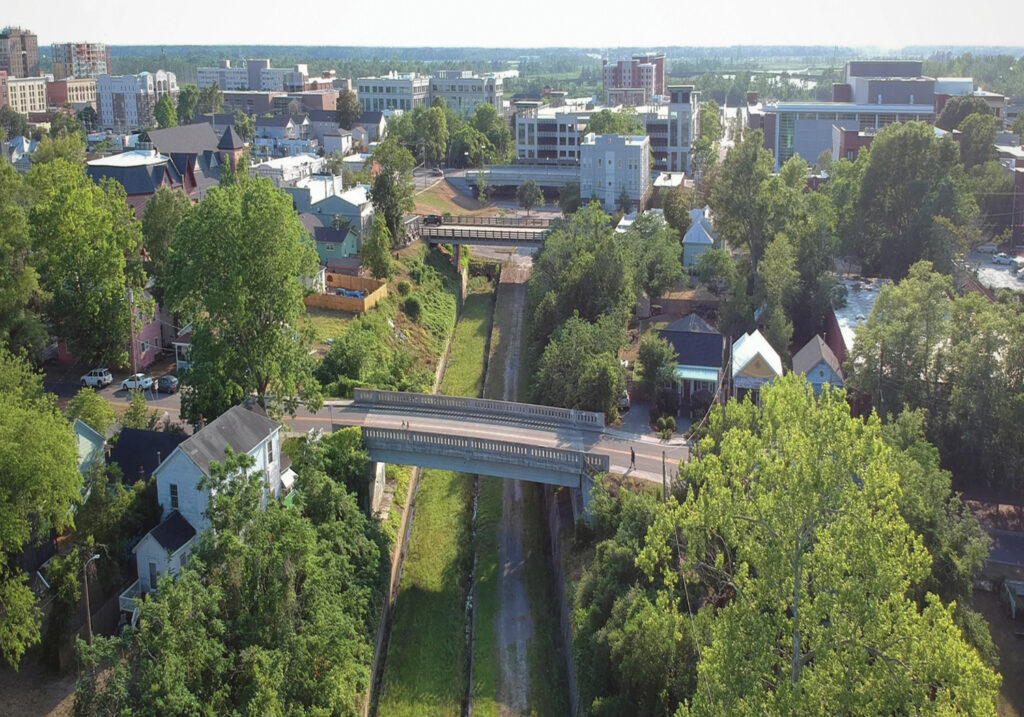 “The Wilmington Urban Area Metropolitan Planning Organization awarded the City of Wilmington $680,000 from our Coronavirus Response and Relief Supplemental Appropriations Act funding to complete the design for the Downtown Trail Phase One, which includes the Rail Trail,” says Mike Kozlosky, executive director of WMPO.

Engineering firm WSP was scheduled to complete the survey work for the initial 2.2-mile trail by the end of March. This phase connects 3rd Street to the Love Grove bridge. The recent funds are for design work with construction funds to come later.

“The path could be anywhere from 8- to 12-feet wide depending upon the design, which has yet to be completed,” Kozlosky says.

The city has a rich railroad history, but there have not been any passenger trains since 1968.

The difficulties and exciting possibilities are spelled out in the 2020 Rail Trail Master Plan. Enhanced walking paths, better connections for bus transit, local art, area history preserved and on display, handicapped access, and exercise stations are all elements of the plan.

Phase One constitutes land leveling, storm drainage, and the construction of the pedestrian walkway.

Phase Two will include protective fencing, art installments, and will require some safety development with the N.C. Department of Transportation.

Although still many years down the road, an exciting third phase would be to reintroduce passenger rail to downtown, completing the multimodal design.

Grassroots efforts by residents, businesspeople and community leaders helped reignite the desire to make use of the long deserted 5.9-mile rail bed and have been the muscle in getting the greenway started. Whether used by bicycling or walking enthusiasts, historians, art lovers, or proud Wilmingtonians, the opening of a walkable connection from the northside to all the amenities downtown could be a great boon for the area.

Planning takes time. The North Carolina Department of Transportation (NCDOT) released survey results in 2001 discussing the feasibility of passenger rail lines in Southeastern North Carolina. The report indicated there was strong interest in rail from Wilmington to the Northeast and Raleigh. The pluses include reduced air pollution, new economic development, and alternate means of travel for college students, businesspeople and tourists. It could possibly meet some freight needs for the Port City as well. A station location is yet to be determined.

The 2013 New Hanover County/City of Wilmington Comprehensive Greenway Plan introduced a rail trail idea. One goal cited was “to ease access from underserved communities of Northside and Love Grove to the amenities blossoming in downtown.” Survey results revealed almost 20 percent of Northside residents did not have access to a car.

While the design is being completed and will need to be approved, other enhancements have taken place in recent years.

In 2016, the NCDOT completed the $4.4 million replacement of 3rd Street’s 100-year-old bridge between Hanover and Campbell streets. In 2019, the new bridge was dedicated in memory of Meadowlark Lemon, the Wilmington native famous for his basketball skills and antics for 20 years with the Harlem Globetrotters. He died in 2015.

Noted as the first art installment of the Rail Trail, the Meadowlark Lemon Memorial Bridge was first lit on April 12, 2021. The bridge is lit nightly from dusk to 2 a.m., and from 5 a.m. to sunrise. The Rail Trail will go through the underpass and eventually connect to the Riverwalk.

Timeline of the Wilmington Railbed

1960 After 115 years, the railroad by then known as the Atlantic Coast Line Railroad relocated its headquarters from Wilmington to Florida, devastating the local economy. It was the number one employer.

2019 Friends of the Wilmington Rail Trail organized to push for the revitalization of the rail bed.

2022 The abandoned Atlantic Coast Line railroad bed, known as the Rail Trail, receives a grant for design work for the initial 2.2-mile pedestrian and bicycle trail.

In March 2022, the New Hanover County Board of Commissioners voted 4-1 to begin the process of adding a referendum to the Nov. 8 general election ballot for voters to weigh in for or against a quarter-cent transportation sales tax for all county residents. As proposed, 45 percent of the tax would fund Wave Transit, 40 percent would go to bike and pedestrian paths, and 15 percent for rail realignment going south to the port.

Will any of this proposed funding go towards the multimodal Rail Trail on the ACL railroad bed?  “It could be. That is a potential project. That’s one of the identified projects,” says New Hanover County Director of Parks and Gardens Tara Duckworth.

The March vote was step one in a long process. County commissioners would next advertise to hold a public hearing, possibly this summer, for input from the public.

After the public hearing, the commissioners would have a choice of voting to do nothing, or go ahead with the sales tax referendum appearing as a ballot question in November. (Two commissioners are also up for re-election on the November ballot.)