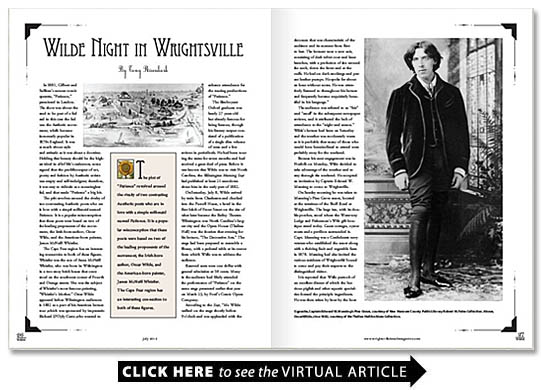 In 1881 Gilbert and Sullivan’s newest comic operetta “Patience ” premiered in London. The show was about the need to be part of a fad and in this case the fad was the Aesthetic movement which became immensely popular in 1870s England. It was as much about style and attitude as it was about a doctrine. Holding that beauty should be the highest ideal in all of life’s endeavors some argued that the prolific output of art poetry and fashion by Aesthetic artists was empty and self-indulgent; therefore it was easy to ridicule as a meaningless fad and that made “Patience” a big hit.

The plot revolves around the rivalry of two contrasting Aesthetic poets who are in love with a simple milkmaid named Patience. It is a popular misconception that these poets were based on two of the leading proponents of the movement the Irish-born author Oscar Wilde and the American-born painter James McNeill Whistler.

The Cape Fear region has an interesting connection to both of these figures. Whistler was the son of Anna McNeill Whistler who was born in Wilmington in a two-story brick house that once stood on the southwest corner of Fourth and Orange streets. She was the subject of Whistler’s most famous painting “Whistler’s Mother.” Oscar Wilde appeared before Wilmington audiences in 1882 as a part of his American lecture tour which was sponsored by impresario Richard D’Oyly Carte who wanted to enhance attendance for the touring productions of “Patience.”

The flamboyant Oxford graduate was barely 27 years old but already famous for being famous though his literary output consisted of a publication of a single slim volume of verse and a few reviews in periodicals. He had been touring the states for seven months and had received a great deal of press. Before it was known that Wilde was to visit North Carolina the Wilmington Morning Star had published at least 21 anecdotes about him in the early part of 1882.

On Saturday July 8 Wilde arrived by train from Charleston and checked into the Purcell House a hotel in the first block of Front Street on the site of what later became the Bailey Theater. Wilmington was North Carolina’s largest city and the Opera House (Thalian Hall) was the location that evening for his lecture “The Decorative Arts.” The stage had been prepared to resemble a library with a pedestal table at its center from which Wilde was to address the audience.

Reserved seats were one dollar with general admission at 50 cents. Many in the audience had likely attended the performance of “Patience” on the same stage presented earlier that year on March 23 by Ford’s Comic Opera Company.

According to the Star “Mr. Wilde walked on the stage shortly before 9 o’clock and was applauded with the decorum that was characteristic of the audience and its manner from first to last. The lecturer wore a new suit consisting of dark velvet coat and knee breeches with a profusion of lace around the neck down the front and at the cuffs. He had on dark stockings and patent leather pumps. He spoke for about an hour without notes. He was attentively listened to throughout his lecture and frequently became exquisitely beautiful in his language.”

The audience was referred to as “fair” and “small” in the subsequent newspaper reviews and it attributed the lack of attendance to the “night and season.” Wilde’s lecture had been on Saturday and the weather was moderately warm so it is probable that many of those who would have been inclined to attend were probably away for the weekend.

Because his next engagement was in Norfolk on Monday Wilde decided to take advantage of the weather and to stay through the weekend. He accepted an invitation by Captain Edward W. Manning to come to Wrightsville.

On Sunday morning he was taken to Manning’s Pine Grove resort located at the terminus of the Shell Road at Wrightsville. The large inn with its double porches stood where the Waterway Lodge and Fisherman’s Wife gift boutique stand today. Guest cottages oyster roasts and a pavilion surrounded it. Capt. Manning was a Confederate navy veteran who established the resort along with a thriving fruit and vegetable farm in 1878. Manning had also invited the various residents of Wrightsville Sound to come and pay their respects to the distinguished visitor.

It is reported that Wilde partook of an excellent dinner of which the luscious pigfish and other aquatic specialties formed the principle ingredients. He was then taken by boat by the host and a party of young gentlemen to the beach. Wilde was an excellent swimmer and following a delighted and refreshing bath in the ocean “he participated in an exciting foot race on the wave washed sands of the lovely beach.” He then returned to the hotel and spent the afternoon in the Pine Grove pavilion seated in the midst of a circle of admirers “to whom he discoursed entertainingly of England its manners and customs and other interesting topics.”

In the early evening Wilde accepted an invitation to tea or late supper with Major Charles Manly Stedman at his summer home nearby which was known as Stedman’s Park. Years later it was acquired by the Pearsall family and renamed Gray Gables. Stedman had been born in Pittsboro North Carolina and after serving in the Confederate army had moved to Wilmington where he married Catherine De Rosset Wright. At the time of Wilde’s visit he was a partner in the Stedman and Latimer Law Firm. Later he became Lieutenant Governor of North Carolina and was the last Civil War veteran to serve in the United States Congress. He died in office in 1930.

The Stedman home was a large rambling house with a long veranda across its eastern face overlooking the sound and was reportedly built by French Huguenots around 1740. The estate was entered through Allen’s Lane and Wilde would have seen the many outbuildings including a large barn horse stables a carriage shed and a row of one-room cottages for the field hands. Wilde was impressed with the Stedmans’ sunflowers which were a symbol of the Aesthetic movement. He declared the estate to be “the most delightfully charming and sweetly picturesque country residence he had visited in a long long while.”

Around 10:30 p.m. he returned downtown in preparation for an early morning departure on the Wilmington and Weldon for Norfolk.

According to the press accounts Wilde was quite enchanted with his visit to Wrightsville Sound. Those who conversed with him were very impressed with his rare conversational powers varied information and cultivated taste. Little did they realize that they were entertaining the man who in a few years was to give the world “Lady Windermere’s Fan ” “Salomé” and “The Importance of Being Earnest ” which established him as one of the most brilliant British playwrights of all time as well as a historical figure that continues to fascinate the public more than 100 years after his death.