The Games of Grandfather 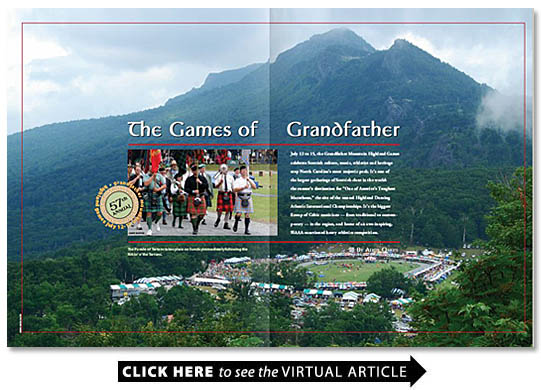 Every July 12-15 the Grandfather Mountain Highland Games celebrate Scottish culture music athletics and heritage atop North Carolina’s most majestic peak. It’s the largest gathering of Scottish clans in the world the runner’s destination for “America’s toughest” marathon the site of the annual Highland Dancing Atlantic International Championships. It’s the biggest lineup of Celtic musicians — from traditional to contemporary—in the region and home of an awe-inspiring SSAAA-sanctioned heavy athletics competition.

Any festival would be highly favored to hang its hat on just one of these spectacular events but it’s the Grandfather Mountain Highland Games in Linville North Carolina that lays claim to all of them. Considering the games take place at one of the highest elevations east of the Rockies and in what many call the most scenic place in North Carolina it’s not so surprising then that the Grandfather Mountain Highland Games turn out so many superlative attractions.

“It’s sort of like a 10-ring circus in a one-horse town ” says Frank Vance who has served as general manager of the Highland Games for 25 years. To be clear Grandfather Mountain’s average annual Highland Games attendance of 30 000 or more isn’t the most in the world but it has more clans represented than any other Scottish games — aye even in Scotland. More than 100 Scottish clans and societies attend each year. And Vance suspects it’s because of the magnificent surroundings: an epicenter of color and culture and activity sprawled across MacRae Meadows in the shadow of Grandfather’s rugged peaks.

“This is the way it would have been in Scotland 200 years ago ” says Vance noting this isn’t any old festival crammed into a ball field or a parking lot. “I don’t think that there’s a more beautiful location anywhere in the world than Grandfather Mountain.”

As the Grandfather Mountain Highland Games strive to foster and restore interest in Gaelic culture the event is rich with Scottish rituals and traditions.

On Thursday evening one of the festival’s first events is the Torchlight Ceremony — a call to raise the clans. Historically the raising of the clans refers to a summons to battle but at the Highland Games the ceremony represents a celebration of Scottish heritage. A torchbearer represents each participating clan. Approaching from the compass points to symbolize the widespread distribution of Scottish descendants lines of torches glow in the darkening sky. The four lines eventually meet to form a cross.

Sheep herding with border collies one of Vance’s favorite events takes place on each day of the games.

“I’m an old retired school teacher ” Vance explains. “Those dogs obey their master so much more than my kids obeyed me.”

Rest and relax with storytelling by Orville Hicks of nearby Beech Mountain a lasting bastion of preserved stories handed down by Scots-Irish peoples who settled in Appalachia hundreds of years ago.

“The last place in North America that I know of that the old stories in Scotland are told the way they were told is by the Hicks family in Beech Mountain ” Vance says.

In addition to standard festival food sample a menu of Scottish fare whether it’s a Scottish egg (a hard-boiled egg wrapped in sausage) meat pies or a lamb sandwich.

Attendees gather together on Sunday morning for a church service representative of the old Presbyterian worship services held in Scotland including a “Kirkin’ o’ the Tartans” during which a clergyman asks a prayer over the tartans — the plaid clothing patterns unique to each clan — requesting a blessing for each family. The service is followed by the Parade of Tartans a stunning display of clan names kilts tartans and flags in a march behind massed pipe bands.

Feats of Strength and Endurance

“In ancient times there were seven major events that Scottish heavyweights performed as well as track and field events ” Vance explains. The Grandfather Mountain Highland Games continue this time-honored series of fierce competition each year drawing athletes and spectators from all over the globe.

One of the most jaw-dropping displays is the caber toss or turning the caber which requires athletes to flip a telephone pole-sized tree trunk striking the ground at a vertical position.

Tossing the sheaf requires competitors to heave a bundle of straw over a raised bar. Weight throw participants sling a heavy metal disk as far as they are able.

In the Scottish hammer throw competitors swing a four-foot shaft with a metal ball affixed to the end around their heads before releasing it. Because the centrifugal force is so strong the athletes risk soaring through the air along with the hammer — that’s why many wear special shoes to remain planted on the ground.

The games have four weight classes of highland wrestling competition and all participants must wear a kilt. On Sunday clan members lean grunt and strain as they compete for bragging rights in the tug-o-war.

The 26.2-mile Grandfather Mountain Marathon beckons runners from across the country and world to take a turn on the challenging course which begins in Boone and ends on the track at Grandfather Mountain’s MacRae Meadows the final 13 miles of which is uphill. Don’t think you can run that far? There’s a five-mile footrace too but it’s no less brutal. Aptly named The Bear the race climbs 1 568 feet in elevation from the town of Linville to the summit of Grandfather. Eight hundred runners attempt it each July.

Children’s field games for ages 12 and under take place on Sunday including children’s tug-o-war kilted races and many other activities.

“Sunday to me for the little children is the most fun ” Vance says.

From pure tribal to soulful balladeers

Today the Celtic influence informs many musical artists and genres — from the traditional balladeers tribal ensembles and piping bands to rock bluegrass and fusion bands.

“You can no longer put Celtic music into just one category ” explains Donovan Murray of Celtic Force Enterprises who books musical entertainment for the Grandfather Mountain Highland Games. “It’s not just a guy with a guitar singing a ballad that makes you cry.”

Artists come from all over the country and world to perform on the Celtic Groves’ three stages.

“We have bands that are willing to come in from Scotland ” Murray says. “We only have so much real estate … but when you take them and put them in that meadow down below the top of Grandfather there’s just something about the place that makes [the Groves] extra special.”

This year traditionalists will enjoy performances by Colin Grant Adams and Ed Miller. For high-energy Celtic rock there’s Uncle Hamish and the Hooligans or hold on tight for the Appalachian Celtic punk of Cutthroat Shamrock. Scotland’s Saor Patrol back by popular demand is pure tribal Murray says. And all the way from Michigan comes the Chelsea House Orchestra a fiddle-powered ensemble of school children performing Celtic with a kick.

And oh the bagpipes — professional and amateur piping competitions are held on the festival’s East Meadow on Saturday and Sunday.

Can’t decide which bands to see?

“If anyway possible come to the Friday night Celtic Jam ” Murray says. “Everyone plays for about 30 minutes.”

If you only have one day to visit avoid the Saturday crowds and enjoy a full day of cultural activities athletics and the Celtic Jam featuring all musical acts at the festival.

Sunday is also less crowded than Saturday and features numerous activities for children. After noon on Sunday attendees get in the gates for a reduced ticket price.

If you don’t want to use the festival’s offsite park-and-ride shuttle to the festival arrive at the festival gate early (before 8 a.m.) as limited onsite parking is first come first served.

No that’s not a typo. It may be mid-July but because of Grandfather Mountain’s high elevation temperatures can be quite cool in the evenings.

Dozens of Scottish clans are represented at the Grandfather Mountain Highland Games and each will have a display and volunteers working at the festival. Within each clan there are many septs which are family names descended from a specific clan.

“Clan Donald for example might have 50 different names associated with it ” says Frank Vance general manager of the games.

“It’s a chance for you to talk to the people from your clan ” he says. “They’ll have lists in their tent of the septs.” Scottish societies and associations are there to help too.