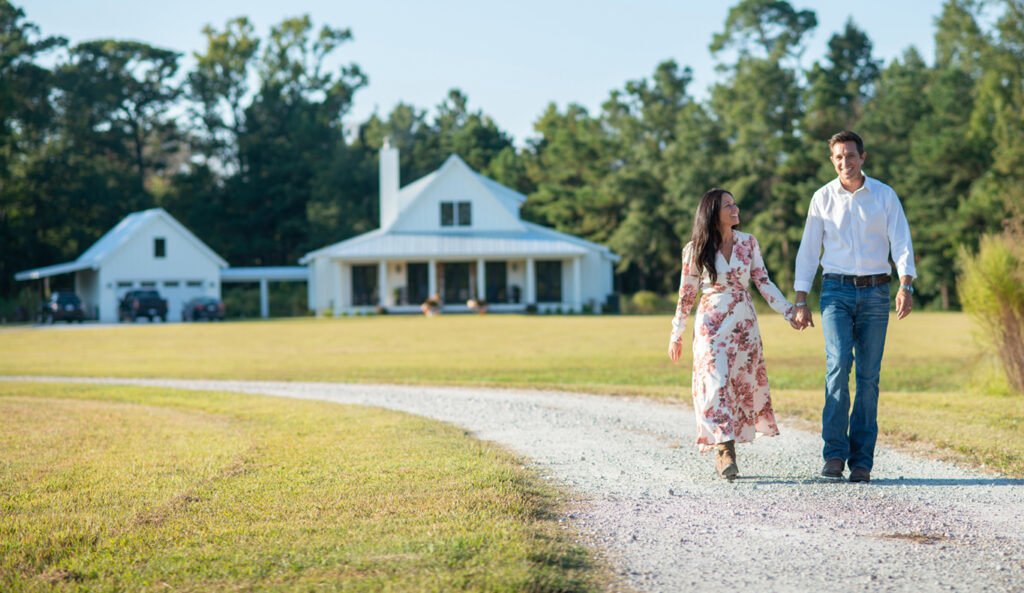 Heather Ohm-Fisher and Dave Fisher are the owners of Wild Hearts Farm, a hobby farm and modern-style farmhouse built on 17 acres of land in Castle Hayne. Photo by Harry Taylor

The single-lane road leading to Wild Hearts Farm is enough to take the stress of the day away. Open green pastures and horses galloping at a neighbor’s stables make it hard to believe the hustle and bustle of Wilmington is just a few miles down the interstate.

Located in Castle Hayne, Wild Hearts Farm spans 17 acres with a custom-built modern farmhouse in the center of it all, plus 3,000 acres of state-owned game land as its backdrop. Home to husband-and-wife Dave and Heather Fisher, the “hobby farm” is not too big or too small, but rather just right for two executives-by-day to enjoy.

“A hobby farm is when you work full-time, but you have a garden, maybe chickens, a couple of goats and horses,” Heather says.

“Just enough to really enjoy the animals, more of a hobby,” says Dave.

Dave and Heather, who work in the pharmaceutical industry, both come from rural upbringings. The itch to get back to the country began one day while horseback riding near the land they now own.

“We rode all around the neighborhood and fell in love with this area because it’s just so charming,” Heather says. “This all used to be a flower farm. When we found this piece of property, we jumped on it.”

Construction of the modern farmhouse was completed in February of 2020 followed by a custom chicken coop and greenhouse built by Dave and Heather themselves. The Wild Hearts Farm name was decided on one evening while enjoying a sunset on the front porch.

“When the sun starts to set, you’ll start hearing the owls hooting, little bats start flying around, you’ll start seeing deer coming up across the field. You can sit on that front porch and there’s no reason for a TV or your phone, you’ve got all the entertainment you need just out there,” Dave says.

Farmhouses in early American history tended to be sturdy and simple, reflecting settlers’ need for a practical home. The Fisher’s homestead is defined more by clean lines, neutral tones and comfy yet sophisticated furnishings and fixtures.

Like Dave and Heather, architect Cory Thompson grew up in a rural area.

“I definitely pulled from my background with the design; I grew up on a 500-acre farm near Charlotte,” says Thompson, owner and residential designer of Thompson Design Build. “The wrap-around porch is signature of a country farmhouse. The low-slope roof on the porch combined with the steeper pitch on the main house create that farmhouse vernacular.”

Incorporating old architecture is key to achieving a farmhouse interior. During construction, Heather and Dave took a trip to Dave’s family farm in Pennsylvania and discovered a gold mine.

“We went all through my parents’ barn, this gorgeous old pole barn built in 1865, we found all this American chestnut wood just sitting up in the rafters,” Dave says.

“You can’t find American chestnut anymore because there was a blight that killed everything,” says Heather. “I literally stalked the barn for a long while. I would say, ‘Dave, we need this, and this.’”

The floating vessel sink base in the powder room is made of the reclaimed American chestnut, as is the fireplace mantel, the kitchen hood, and a beam underneath the staircase. In the master bedroom, a headboard is made of the Pennsylvania barn’s siding that Dave’s dad planned to throw out.

“My dad said, ‘So what are you going to do with all this old junk wood?’” laughs Dave. “Here I am running my hands over it, saying ‘Look at the grain!’ The farm has been in our family forever. That barn was our lineage and now we get to keep it going.”

Salvaged pieces of Dave and Heather’s former boat dock destroyed by Hurricane Florence were repurposed into a bench in the laundry room. The dock’s cleats became coat hangers.

“Heather’s got the eye, she does the design and then I’ve got to execute one way or another,” Dave says.

“I love a project and it was important for me to combine vintage with new,” Heather says.

Shiplap walls were painted in Benjamin Moore’s Chantilly Lace. Barn doors were stained by Dave and Heather in a weathered gray. The fireplace is wood-burning, and the kitchen has an apron sink, another farmhouse signature stemming from before plumbing when large basins were needed to hold water brought in from nearby riverbeds. The open floor plan and clerestory loft are features of historic farm homes as well.

“The house reminds me of an older house on my grandfather’s farm. It’s really quaint and the porch gives the real tie to the farm and farmhouse look in my opinion,” Thompson says.

There are 11 hens, one rooster, two goats, three rescue cats and one rescue dog so far on Wild Hearts Farm. Butterflies flutter about the garden of zinnias, gladioli, lilies and dahlias. A typical Sunday consists of coming home after church to gather eggs from the chicken coop and climb onto the tractor to mow the acres of grass.

“It takes Dave three to four hours,” says Heather, who adds baking bread in her cast iron Dutch oven to her Sunday chores.

“Farmhouse” is more than just a style. It’s a lifestyle, one shared by many across the country. Heather discovered the community through creating an Instagram page that’s grown to 8.5k followers.

“It started as a creative outlet, to hopefully lighten up someone’s day with pretty pictures of the farm or the animals, and then it kind of took off,” Heather says.

“When is the best time to start decorating for fall?” Heather asks in an Instagram post. Another post of zinnias and seeds shares tips on how to start a garden. A post of the tractor adorned with an American flag bow on the 20th anniversary of 9/11 pays tribute to current and former military members, including Dave, who was in Iraq with the U.S. Army’s 82nd Airborne Division. A video of a stroll with June and Dolly (the goats) and Baruch (the dog) offers a peak into the hobby farm life.

“I love to just walk the grounds and see what things are changing and growing,”Dave says. “In the fall, there’s the changing of the leaves. There’s a beautiful stream that goes all the way down to the river; you can canoe out there.”

Dave hunts the game lands that back up to their property.

“I’ll make venison sausage and give it to friends or bring it to a party,” he says.

“Being able to harvest food from your own property is very satisfying,” Heather says. “An important part for us is being good stewards of the land. God calls us to be good stewards of land he gave us.”

One day the producers of Big Fish Entertainment called.

“They said, ‘We have a show, it’s someone you know really well,’ but they wouldn’t tell me who it was,” says Heather.

It was Martha Stewart. The Fishers appeared via video call on the July 17 episode of Martha Gets Down and Dirty, a Discovery Plus series on gardening and farming.

“She was really nice and really funny,” Heather says.

In the all-about-chickens episode, Heather asked Stewart how to integrate new chicks with hens and how to keep roosters from fighting. You know, hobby farm talk.

Up next for Wild Hearts farm — a barn, more goats, two horses and a picket fence.

“And, who knows, maybe a donkey,” Dave says.

The pumpkins, gourds, mums and stalks pictured are supplied by Carolina Girl Gardens.