Turning Off the Tap

The president of a packaging company is determined to help solve the problem of plastic pollution. 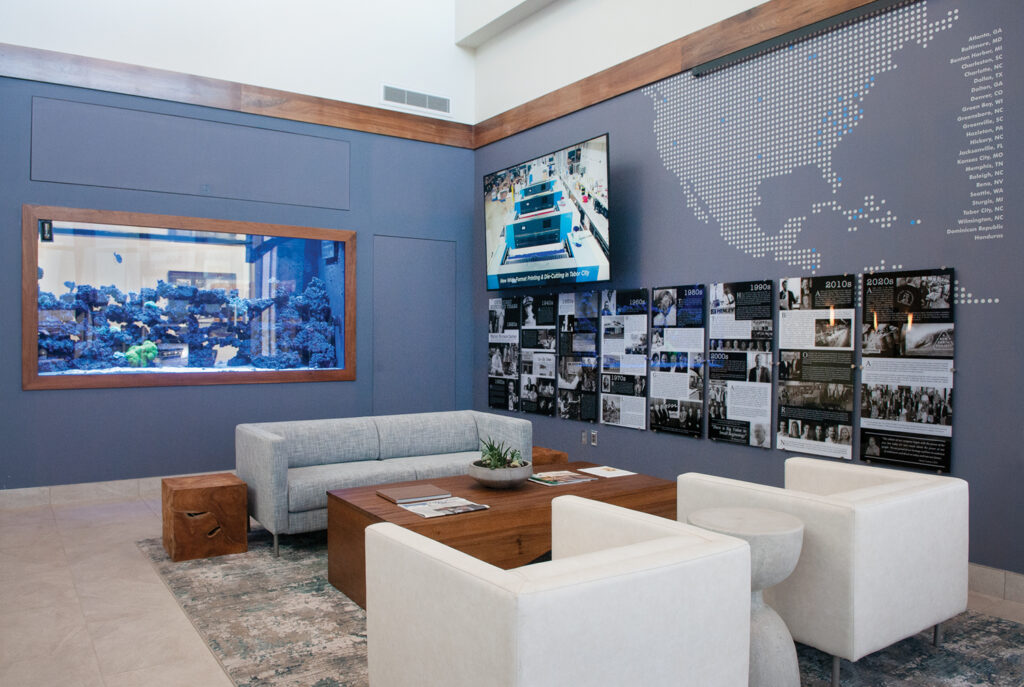 The history of Atlantic Packaging is conveyed through words and photos on the lobby wall. The company is developing more sustainable packaging options for surfboards and other products. Photo by Allison Potter

The first thing you notice is the enthusiasm. And, hard on its heels, the command of very technical subject matter. Following that comes the missionary zeal, the sense of a life mission to make a difference — a positive difference — in the overall health of the planet and its inhabitants.

Wes Carter, a Wrightsville Beach native and president of Atlantic Packaging — and an avid surfer in his 40s — is on a mission: to move consumer products away from single-use plastic packaging, a major cause of ocean pollution.

“What I believe I can do in the area where we have a lot of influence, is we can help turn off the tap,” he says from his Wilmington office.

His company — the largest privately held product packaging company in North America — has taken on sustainability and environmental responsibility as a prime directive. By designing, developing and offering environmentally friendly packaging solutions to the large consumer brands, Atlantic Packaging is helping reduce the flow of “bad plastics” into the environment.

But merely reducing the stream of problem plastics isn’t enough. Sustainable, planet-friendly packaging alternatives are needed to replace the bad stuff. Through development of fiber-based solutions, Carter hopes to help move the industry away from the unrecyclable single-use plastic bottles, wrappers and containers clogging landfills and polluting oceans.

“It’s not my role to be the scientist,” Carter says, “but it is my role to know the science.”

Apparently, he’s a quick study. He is short-notice ready to discuss the ins and outs of recycling, what works and what doesn’t. Take, for example, your recycling bin.

“Here’s what’s so important,” Carter says. “For the most part the American public has had the wool pulled over their eyes about recycling because most people don’t understand what’s actually recycled. Most of the plastic you put in your recycling bin does not get recycled. You send it to the recycling center; they take it off the conveyor as it’s sorted and sent to the landfill. So it’s really, really important that people become more educated about what is actually recycled and what is not.

“Grocery bags, flexible packaging, films, things like that,” he says. “None of that is getting recycled. The municipal recycling facilities cannot handle it. It doesn’t flow through their system very well. And even if they could handle it, it’s not worth anything to them. But things like aluminum recycle really well. And corrugated cardboard recycles really well because, first of all, their conveyor systems and robotic sorters can easily pick out three-dimensional objects.”

Carter has had several “aha!” moments that led to a determination to be part of the solution in reducing the onslaught of non-recyclable packaging.

As a surfer he saw lots of plastic garbage washed up on the beaches of some of the world’s best surfing spots. As a father he thought about his kids and the world they would grow up in.

He realized that a lot of the plastic garbage was packaging, and he was part of the supply chain creating the problem. Some of the top polluters in the world are consumer products companies, many of whom he was doing business with. He determined his company could — and should — be a catalyst for helping influence his large corporate customers to transition to a more sustainable future.

He thought about his grandfather, who founded the company in 1946 and who also had a small weekly newspaper from which, during the early Civil Rights era, he fought for racial justice and against the KKK and won a Pulitzer Prize for meritorious service in 1953.

Two generations later, the fight is for the environment.

The company’s position in the supply chain opens up a lot of possibilities to help improve the entire packaging process from sustainable products to sustainable disposal.

Sustainable disposal and entering the recycling business looks to be the next logical step. The firm operates a 400,000 square foot R&D facility called the Solutions Center in Charlotte. The focus has been innovative package design and materials testing and emphasizing sustainable solutions, but now the center will add a new role. The facility is set to take delivery, probably in the fourth quarter this year, of some “very significant recycling equipment,” Carter says.

And hopefully resulting in a healthier Earth for all of us.

Read the story of W. Horace Carter and the Carter family and the Tabor City Tribune “Lessons Learned”Wrightsville Beach Magazine, May 2009.

For more about recycling in our area, read “Blue Bin Basics” in the April 2021 issue, paying attention to the section on Municipal Recycling in the Cape Fear Region and the Plastic Recycling Cheat Sheet.