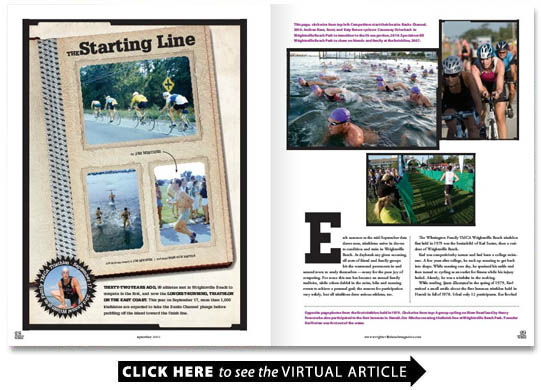 Thirty-two years ago 99 athletes met in Wrightsville Beach to compete in the first and now the longest-running triathlon on the East Coast. This year on September 17 more than 1 000 triathletes are expected to take the Banks Channel plunge before peddling off the island toward the finish line.

Each summer as the mid-September date draws near triathletes arrive in droves to condition and train in Wrightsville Beach. At daybreak any given morning all sorts of friend and family groups hit the waters and pavements in and around town to ready themselves many for the pure joy of competing. For some this race has become an annual family tradition while others dabble in the swim bike and running events to achieve a personal goal; the reasons for participation vary widely but all triathlons draw serious athletes too.

Karl was competitive by nature and had been a college swimmer. A few years after college he took up running to get back into shape. While running one day he sprained his ankle and then turned to cycling as an outlet for fitness while his injury healed. Already he was a triathlete in the making.

While reading Sports Illustrated in the spring of 1979 Karl noticed a small article about the first Ironman triathlon held in Hawaii in fall of 1978. It had only 12 participants. Karl looked for a local sponsoring organization approached the Wilmington YMCA which was under the direction of Jack Morris at the time and a new event for the area was born.

This triathlon named the Pepsi/YMCA Triathlon would become the first and now the longest-running triathlon on the East Coast of the United States. With 99 participants in September 1979 it began and ended in Wrightsville Beach.

The swimming course began then as it does today at the Blockade Runner Beach Resorts sound-side beach. Those first triathletes swam across Banks Channel landing at the South Channel Drive Mini Park on Harbor Island. Today they exit the water at SeaPath Marina.

The first triathletes followed a training route favored by cyclists at that time for the second leg of the journey leaving the beach and coursing along Greenville and Masonboro Loop roads following Myrtle Grove Sound Road south to Carolina Beach Road and crossing the Snows Cut bridge following Dow Road to Kure Beach where the first water stop was located. From there the course ran back through Carolina Beach back across Snows Cut to River Road and along River Road into downtown Wilmington.

Once downtown the running course established by the Wilmington Jaycees and its River to the Sea route began at the foot of Market Street wound through Forest Hills to Park Avenue hooked up with Wrightsville Avenue and ended at the finish line at Wrightsville Beach Park.

The distances that first year included a half-mile of swimming
42 miles of cycling followed by a 10-mile run. All 99 triathletes finished. As an emerging sport in its infancy most present-day rules did not exist; the only stipulation was that athletes had to wear a helmet.

he Wrightsville Beach transition area between the end of the swimming lap and the beginning of the cycling course was a grassy park where athletes could choose any place for parking a bike but there were no bike racks. Drafting or riding closely behind another cyclist to take advantage of the slipstream and personal support cars with spare bikes and parts were considered fair game. Today these tactics are grounds for disqualification. There was very little traffic control and for the most part competitors fended for themselves while on the road.

Granola fruit soft drinks and candy bars were staples; gels and energy bars were not yet invented. The common practice of the day was to change clothes for each leg of the race. Of course this was before triathlon shorts came into fashion during the mid-80s.

Karl Sutter was the race director the first year and then handed the job to me. I took responsibility for the 1980 and 1981 events. The following year Jim Ritch succeeded me as race director but after a two-year stint relinquished the reins to Jim Honneycutt. All four of us were members of the YMCA the Wilmington Road Runners and the Cape Fear Cyclists clubs. Without the help of the club members organizing the triathlon would have been difficult.

To keep from burning out the volunteer race directors the YMCA assumed the organizational responsibilities. For the next 20 years staff members Nancy Rife Perry Maxwell and Gray Lambeth would run the show. Setup Events a Kure Beach-based event coordination business founded by Bill Scott teamed up with the Y in the late 1990s.

The triathlon has flourished since its humble beginnings attracting as many as 1 200 to 1 400 entrants selling out months in advance. Now this event has become a major fundraiser for the YMCA. Y director Dick Jones says the triathlon raises money for countywide community outreach. Dick has also become a triathlete largely because of the good energy radiating from all involved in such a great event.

Triathlons have experienced unprecedented growth during the past decade with more than 132 000 members in 2010 as well as 325 000 one-day memberships in the United States Triathlon Association. North Carolina is third in the country only behind Florida and California in actual number of triathlons hosted. Currently there are 12 triathlons within an hours drive of Wilmington with seven held in New Hanover County.

With the first and longest-running East Coast triathlon having its roots right here in Wrightsville Beach local triathletes can rest assured that the event is here to stay.

So grab a PowerBar; get some last-minute training; and Ill see you on the starting line!

Fraser Perry the Poster Boy
Fraser Perry raced in the first Wilmington YMCA Triathlon and almost every one since. This year is no exception for this 81-year-old.

At the far south end of Wrightsville Beach sits a home carefully removed from the beaten path in this case Water Street the far promontory of South Lumina Avenue by means of a long driveway and a row of tall hedges. It is a beautiful home though a simple one with unparalleled access to Banks Channel. Its pier is the islands southernmost.

He has competed in the annual triathlon almost every year since the events inception in 1979 an impressive record by anyones count. And given the greater spirit of the competition one of vigor determination and charity Fraser ever modest is poised to be this events poster boy.

“I love it because its great for physical health but it also serves the community ” Fraser says citing the fact that proceeds from the event go to the YMCAs “We Build People” campaign which expands club membership to the underprivileged.

Fraser grew up in Wilmington returning home after four years at the University of North Carolina Chapel Hill and service in the Navys Atlantic Fleet during the Korean War. He has lived with Rogene his wife and fellow triathlete on Wrightsville since 1969 capitalizing on its elements to stay in shape. From his pier (or sometimes to it) he will swim a mile and a quarter before reporting to his brokerage office on Wrightsville Avenue. His feet are well worn from the asphalt of Lumina Avenue.

“Im not a good athlete ” he says with a smile “Im just a determined one.”

Determined indeed Fraser will compete in the 2011 Wilmington YMCA Triathlon contributing one more event T-shirt to the box of triathlon swag he stores in his attic.

Modesty aside hes anticipating a victory.

“If youre the only one in your age group youre going to win ” he says “But then again everyone who trains hard and finishes is a winner.” Nash Jenkins

Thomas Hefron Leader of the Pack
Thomas Heffron shares his passion for speed sports with his brothers Patrick and Fisher all of whom will be competing in this years Wilmington YMCA Triathlon.

In a handful of senses 13-year-old Thomas Heffron knows what its like to lead the pack. He is the oldest of four with two brothers and a sister a standout student at Roland-Grise Middle School and an exceptional athlete. Thomas is in short a walking trifecta.

Thomas still-budding career as a triathlete stems from a carefree curiosity that has ultimately solidified itself through his love of and seemingly innate ability for speed sports. He swims year-round for the Waves of Wilmington and has been running for as long as he can remember tracing his thirst for velocity to his post-toddler soccer days.

“Last year some of my friends told me theyd done youth triathlons so I figured Id start to train for one ” he says casually failing to mention that of the friends who spurred his interest he was the youngest and also among the fastest. His humility hardly seems contrived.

Thomas finished the Wilmington YMCA Triathlon last September in 1:41:03. Ten months of extensive training enabled him to shave six minutes off his time in Julys Kure Beach Triathlon finishing only 17 minutes behind his 39-year-old father Chris Heffron an avid triathlete and his foremost training partner.

The younger Heffrons passion appears contagious. Next month his two younger brothers will join him in the 2011 Wilmington YMCA Triathlon participating in the race as a relay team. Patrick 11 and Fisher almost 10 will run and bike; Thomas will swim the Wrightsville Beach leg. And though hell only participate in a third of the race Thomas Heffron will offer guidance support and seasoned wisdom to his younger siblings in short leading the pack. Nash Jenkins