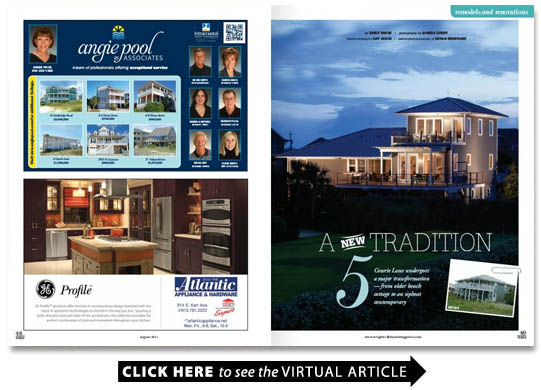 When Kathy Brown her husband Tony Brown and their three nearly grown children walk up the wooden staircase onto their first-floor deck at their Cowrie Lane home they are immediately greeted with a rush of salty sea breeze. The couple bought the traditional 1968 beach house in 2009 as a vacation getaway from their Davidson North Carolina home.

“We started coming to Wrightsville 30 years ago when we were in college in Raleigh ” Kathy Brown explains. “We kept coming back every so often and always hoped one day to have a beach house. We considered any beach community we had ever visited but Wrightsville Beach just continued to stack up in every way. Theres an attitude in Wrightsville and Wilmington that you dont find anywhere else and its pretty compelling and endearing.”

Renovations on the house began near Thanksgiving 2010 and just wrapped up turning the one-story classic beach house into a two-story five-bedroom and four-bathroom getaway. The couple hired Bryan Humphrey of Bryan Humphrey Design and Construction after their original architect in Davidson didnt work out. Humphrey became both the architectural designer and building contractor.

“I couldnt be here every day ” Brown says. “So what was great about working with Bryan is that he did the design work and then he could also build it then he was also on site every day.” Brown says Humphrey is a craftsman with an eye for design.

“On other projects where you would have four or five people for those jobs he kind of wears all the hats.”

“We found out we could do more to the house than originally thought and we were able to rework some things ” Humphrey explains. “It opened up so many more possibilities.”

One major requirement for the homeowners was that they work with the original footprint of the house to help preserve its architectural integrity.

So Humphrey redesigned the traditional East Coast beach cottage into a two-story house with a contemporary twist on classic timeless elements.

“Ive done other renovation projects and Ive always tried to be respectful and keep it as close to what it was intended on being ” Brown says. “Probably much to Bryans concern I said lets keep the back half of the house and the size and shape that it was.”

Humphrey adds “We didnt change anything about the perimeter. There was room to go out to the setback so we pushed the deck out and covered it and added the upstairs. It was kind of interesting to keep that character of the old beach house while also going a little less traditional ” Humphrey explains.

Essentially Humphrey redesigned the entire house and rebuilt the back two stories the master bedroom and raised the ceilings.

“We did have several discussions over whether or not the house should be torn down ” Brown says.

“And we managed to change everything in the house except the pilings ” Humphrey laughs adding that they strived to bring together both the classic essence of a beach bungalow while bringing things up to date with edgy modern details.

And its easy to see the two styles merge. Right down to the siding outside the house retains its original ideas if not in actuality in spirit. The slate gray giant tiled siding is reminiscent of older homes. “The outside siding is kind of like the old asbestos siding ” Humphrey says “but its not. It refers to it without being the same thing.” White trim keeps this look timeless while stainless steel wire railings surround the pine cantilevered deck adding a modern edge.

One large aspect of the renovation was pushing the living room out and creating more deck space. A horizontal cover with a pale blue beaded board ceiling was added for a shady reprieve from the summer sun.

Through sliding glass doors the deck leads into an extended living space that flows effortlessly into a dining area and kitchen.

Oak floors by Southeastern Wood Products blend into cypress horizontal board and batten wall panels from Special Wood Inc. Built in shelves and cabinets adorn the walls and were designed by Humphrey. These rustic elements merge naturally with contemporary details such as the concrete slab countertops and stainless steel wire railings that lead up to the master bedroom.

The wire handrails with turn buckles were an original design by Humphrey who incorporated them inside as well as on the outside decks uniting the spaces. “I kept drawing handrails and drawing handrails ” he explains. “It came down to the fact that everything in the house had a horizontal theme going on so I didnt want anything diagonal breaking that up.” The angular accents throughout are contrasted by intermittent bouts of soft edges such as a curved corner cabinet and glass globe lights.

Muted grays and whites subdue the space with bright aesthetic pops of color on the furniture while Sunbrella and Chella outdoor fabrics on the sofa and chair keep the worry out of resting in a wet swim suit.

A built-in cypress dry bar creates a simple transition between the dining and living areas acting as a small buffer breaking up the expanse of the large space. Windows bring in natural light from all angles opening the area and reflecting the bright dishes and glassware displayed on shelves above the sink. Stainless steel appliances from Sears and plumbing fixtures by Ferguson add contemporary style while the sturdy concrete countertops by Humphrey anchor the kitchen and dining area. Two butlers pantries with frosted-glass doors flank the ends of the kitchen one for holding the microwave toaster and other daily appliances and the other as a food pantry.

Just past the large living space a hall leads to four of the five bedrooms. Between them a cobalt blue barn door slider hides the laundry room and introduces a burst of color in the otherwise monochromatic palette. Designed by Humphrey this multi-use door also swings on hinges closing off this private downstairs bedroom wing from the public gathering areas.

Up the stairs is the new story a master bedroom and bath. Along the wire-railed staircase is a window on the outer wall with an adjacent window on the inner wall allowing a view from within the bedroom through the staircase. A free-hanging cypress desk rests below the window.

In the center of the naturally lit room is a built-in bed with shelves and flanking fixtures. A triple window offers breathtaking oceans views and floods the room with light. A walk-in closet paneled with refinished birch holds built-in drawers and a small dressing area. Off the bedroom the master bath features Formica Surell countertops from Meyer Laminates and a raised square bowl sink. A standing glass shower occupies the corner.

Just off the bedroom the landing at the top of the staircase allows visitors to take advantage of the views of the second-story terrace while avoiding the master bedroom. The terrace provides stunning views of the Atlantic. The cantilevered lower deck rests below. Its sage green roof lattice creates an architectural buffer. The steel wire rails continue with ipe wooden accents and details.

“Upstairs having the view that never existed before has got to be the best feature of the house ” Brown explains “And just creating that space where it never existed while preserving some kind of character from the original house and adding the modern edge and bringing it up to date. Its all simple ideas and simple lines.”

Back on the ground level of the house a hammock sways next to outdoor changing areas and showers. A pine walkway designed by Humphrey leads toward the beach. Brown explains the low-key landscape that surrounds their beach house “We were not interested in having a manicured landscape that required a ton of water or maintenance.”

The landscaper Neil Taylor with One World Design was more than happy to oblige. Instead of laying down any kind of turf or elaborate garden scheme he chose to plant a delicate array of wildflowers.

“Everything out there is native and it only needs to be watered for a year ” Brown adds. After that the self-sustaining plants will require little if any upkeep. In fact because of their desire to be environmentally friendly Taylor even got the landscape accredited as a Certified Wildlife Habitat by the National Wildlife Federation.