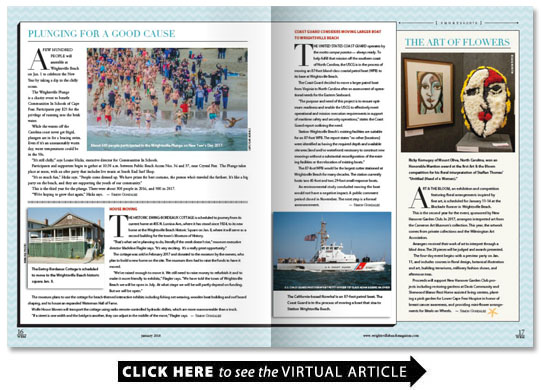 Plunging for a Good Cause

A few hundred people will assemble at Wrightsville Beach on Jan. 1 to celebrate the New Year by taking a dip in the chilly ocean.

The Wrightsville Plunge is a charity event to benefit Communities In Schools of Cape Fear. Participants pay $25 for the privilege of running into the brisk water.

While the waters off the Carolina coast never get frigid plungers are in for a bracing swim. Even if it’s an unseasonably warm day water temperatures could be in the 50s.

Participants and supporters begin to gather at 10:30 a.m. between Public Beach Access Nos. 36 and 37 near Crystal Pier. The Plunge takes place at noon with an after party that includes live music at South End Surf Shop.

“It’s so much fun ” Hicks says. “People come dressed up. We have prizes for best costume the person who’s traveled the farthest. It’s like a big party on the beach and they are supporting the youth of our community.”

The historic Ewing-Bordeaux Cottage is scheduled to journey from its current home at 405 N. Lumina Ave. where it has stood since 1924 to its new home at the Wrightsville Beach Historic Square on Jan. 8 where it will serve as a second building for the town’s Museum of History.

The cottage was sold in February 2017 and donated to the museum by the owners who plan to build a new home on the site. The museum then had to raise the funds to have it moved.

“We’ve raised enough to move it. We still need to raise money to refurbish it and to make it more friendly to exhibits ” Flagler says. “We have told the town of Wrightsville Beach we will be open in July. At what stage we will be will partly depend on funding. But we will be open.”

The museum plans to use the cottage for beach-themed interactive exhibits including fishing net weaving wooden boat building and surf board shaping and to house an expanded Waterman Hall of Fame.

Wolfe House Movers will transport the cottage using radio remote-controlled hydraulic dollies which are more maneuverable than a truck.

“If a street is one width and the bridge is another they can adjust in the middle of the move ” Flagler says. — Simon Gonzalez

The United States Coast Guard operates by the motto semper paratus — always ready. To help fulfill that mission off the southern coast of North Carolina the USCG is in the process of moving an 87-foot Island-class coastal patrol boat (WPB) to its base at Wrightsville Beach.

The Coast Guard decided to move a larger patrol boat from Virginia to North Carolina after an assessment of operational needs for the Eastern Seaboard.

“The purpose and need of this project is to ensure optimum readiness and enable the USCG to effectively meet operational and mission execution requirements in support of maritime safety and security operations ” states the Coast Guard report outlining the need.

Station Wrightsville Beach’s existing facilities are suitable for an 87-foot WPB. The report states “no other [locations] were identified as having the required depth and available site area (land and/or waterfront) necessary to construct new moorings without a substantial reconfiguration of the existing facilities or the relocation of existing boats.”

The 87-foot WPB would be the largest cutter stationed at Wrightsville Beach for many decades. The station currently hosts two 45-foot and two 29-foot small response boats.

An environmental study concluded moving the boat would not have a negative impact. A public comment period closed in November. The next step is a formal announcement. — Simon Gonzalez

The Art of Flowers

Art & the Bloom an exhibition and competition featuring floral arrangements inspired by fine art is scheduled for January 11-14 at the Blockade Runner in Wrightsville Beach.

This is the second year for the event sponsored by New Hanover Garden Club. In 2017 arrangers interpreted art from the Cameron Art Museum’s collection. This year the artwork comes from private collections and the Wilmington Art Association.

Arrangers received their work of art to interpret through a blind draw. The 28 pieces will be judged and awards presented.