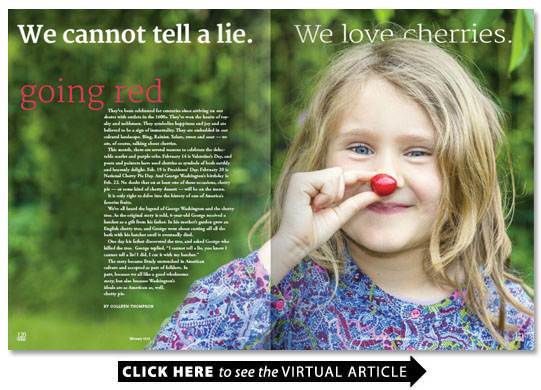 They’ve been celebrated for centuries since arriving on our shores with settlers in the 1600s. They’ve won the hearts of royalty and noblemen. They symbolize happiness and joy and are believed to be a sign of immortality. They are embedded in our cultural landscape. Bing Rainier Tulare sweet and sour — we are of course talking about cherries.

This month there are several reasons to celebrate the delectable scarlet and purple orbs. February 14 is Valentine’s Day and poets and painters have used cherries as symbols of both earthly and heavenly delight. Feb. 19 is Presidents’ Day. February 20 is National Cherry Pie Day. And George Washington’s birthday is Feb. 22. No doubt that on at least one of these occasions cherry pie — or some kind of cherry dessert — will be on the menu.

It is only right to delve into the history of one of America’s favorite fruits.

We’ve all heard the legend of George Washington and the cherry tree. As the original story is told 6-year-old George received a hatchet as a gift from his father. In his mother’s garden grew an English cherry tree and George went about cutting off all the bark with his hatchet until it eventually died.

The story became firmly entrenched in American culture and accepted as part of folklore. In part because we all like a good wholesome story but also because Washington’s ideals are as American as well cherry pie.

It is after all the pie that has woven its way into American food culture and become a symbol of home and tradition. Humble. Unpretentious. It’s part of Americana: A slice of scarlet cherry pie served at a U-shaped counter in a small diner a dollop of whipped cream or vanilla ice cream on the side with a cup of black coffee — all brought to the table by a gum-chewing waitress named Flo. A little nostalgic a little bit timeless.

Pie however was not an American invention. It came to America with the first English settlers. Early colonists’ pies resembled nothing of the sweet golden flaky pastry we know and love today. Their pies were made in long narrow pans that they unappetizingly called “coffins.” Early American pie crusts were actually not eaten at all but were rather designed to hold the filling during baking. It was during the American Revolution that the term pie crust became popular.

As the country expanded pies became a means to use seasonal local ingredients and gave rise to sweet fruit pies which began to reflect regional differences.

Cherry trees came to the New World when French colonists from Normandy first planted pits along the Saint Lawrence River and the Great Lakes area. They became a common feature of gardens as French settlers established cities and towns in the Midwest.

It wasn’t until the 1800s that modern-day cherry cultivation took root. Presbyterian missionary Peter Dougherty moved to northern Michigan to minister to the native population and planted a cherry orchard in the Traverse City area. Local farmers didn’t think the trees would survive the harsh climate but the area proved to be ideal for growing sour cherries which require exposure to cold temperatures to germinate.

By the early 1900s the cherry industry was firmly established in the state with orchards in the Traverse City area and all along Lake Michigan. The fruit soon surpassed other major crops.

Today there are two main varieties of cherries: sweet and sour. Sweet heart-shaped dark purple Bing cherries are mostly grown on the West Coast and are best eaten straight out of hand. Pink and yellow-blushed Rainier cherries grown in the Pacific Northwest are slightly less sweet but still perfect for eating raw or used to make Maraschino cherries.

It is however the tart sour cherry also known as the pie cherry that is best for cooking. The high acidity makes them a little too sour for most people to enjoy straight from the tree but they are perfect for pies. Because they are so perishable it’s extremely rare to find fresh ones in supermarkets or farmers markets but you can find them frozen or preserved.

This holiday whether in celebration of love or country seek out some cherries and bake up a slice of nostalgia.

3 Tbsp sugar plus extra for sprinkling

Preheat oven to 375 degrees. To make the crust that will top the cobbler mix dry ingredients in a bowl and then cut in butter until mixture resembles small peas. Pour in milk and mix gently. Turn the dough onto a floured surface knead lightly and then roll out to size of baking dish.

For filling mix sugar and cornstarch together. Toss with cherries and almond extract and place in baking dish. Cover with dough punch a few holes in surface brush with some milk and sprinkle sugar over the top. Bake for 50 minutes.

Dissolve the Jell-O in boiling water. Remove from heat. Drain the juice from the cans of cherries and pineapple and add to Jell-O. Add the wine and stir all ingredients together. Refrigerate until it sets. Place almonds on top plus a dab of cream cheese mayonnaise or whipped cream to taste. Serves 6-8 people.

To prepare the crust mix all the ingredients together and press into pie pan. Bake at 375 degrees for 8 minutes.

Meanwhile prepare the filling by mixing together the ingredients. Pour into the cooled piecrust and refrigerate for 3 hours or until firm. Top with cherry pie filling.

Reserve 1 cup dry cake mix. In a large bowl combine remaining cake mix with 1 egg and oil until crumbly. Press into two pie plates for crust. In the same bowl blend cream cheese and sugar. Add 3 eggs and reserved 1 cup of cake mix; mix 1 minute at medium speed. Slowly add milk and flavorings mixing until smooth. Pour into crusts. Bake at 300 for 50-55 minutes until center is firm. When cool top with cherry pie filling. Chill in refrigerator before serving.

Place the cherries sugar and lemon juice in a pot over medium heat. Stir to dissolve the sugar. Meanwhile mix the cornstarch in a small bowl with just enough water to form a smooth mixture then add to the cherries and mix well. Add the mixture before the cherries come to a boil or it will be lumpy. Continue to stir the cherries and sauce just until it comes to a boil and is slightly thickened and glossy. Remove from heat.The filling is perfect for pies crumbles and cobblers or simply eaten on its own over vanilla ice cream.