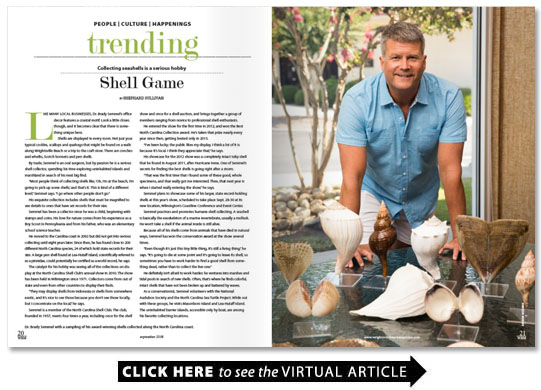 Like many local businesses Dr. Brady Semmel’s office decor features a coastal motif. Look a little closer though and it becomes clear that there is something unique here.

Shells are displayed in every room. Not just your typical cockles scallops and quahogs that might be found on a walk along Wrightsville Beach or a trip to the craft store. There are conches and whelks Scotch bonnets and pen shells.

By trade Semmel is an oral surgeon but by passion he is a serious shell collector spending his time exploring uninhabited islands and marshland in search of his next big find.

“Most people think of collecting shells like ‘Oh I’m at the beach I’m going to pick up some shells ‘ and that’s it. This is kind of a different level ” Semmel says. “I go where other people don’t go.”

His exquisite collection includes shells that must be magnified to see details to ones that have set records for their size.

Semmel has been a collector since he was a child beginning with stamps and coins. His love for nature comes from his experience as a Boy Scout in Pennsylvania and from his father who was an elementary school science teacher.

He moved to the Carolina coast in 2002 but did not get into serious collecting until eight years later. Since then he has found close to 200 different North Carolina species 24 of which hold state records for their size. A large pen shell found at Lea-Hutaff Island scientifically referred to as a pinnidae could potentially be certified as a world record he says.

The catalyst for his hobby was seeing all of the collections on display at the North Carolina Shell Club’s annual show in 2010. The show has been held in Wilmington since 1971. Collectors come from out of state and even from other countries to display their finds.

“They may display shells from Indonesia or shells from somewhere exotic and it’s nice to see those because you don’t see those locally but I concentrate on the local ” he says.

Semmel is a member of the North Carolina Shell Club. The club founded in 1957 meets four times a year including once for the shell show and once for a shell auction and brings together a group of members ranging from novice to professional shell enthusiasts.

He entered the show for the first time in 2012 and won the Best North Carolina Collection award. He’s taken that prize nearly every year since then getting bested only in 2015.

“I’ve been lucky; the public likes my display. I think a lot of it is because it’s local. I think they appreciate that ” he says.

His showcase for the 2012 show was a completely intact tulip shell that he found in August 2011 after Hurricane Irene. One of Semmel’s secrets for finding the best shells is going right after a storm.

“That was the first time that I found some of these good whole specimens and that really got me interested. Then that next year is when I started really entering the show ” he says.

Semmel plans to showcase some of his larger state record-holding shells at this year’s show scheduled to take place Sept. 28-30 at its new location Wilmington’s Coastline Conference and Event Center.

Semmel practices and promotes humane shell collecting. A seashell is basically the exoskeleton of a marine invertebrate usually a mollusk. He won’t take a shell if the animal inside is still alive.

Because all of his shells come from animals that have died in natural ways Semmel has won the conservation award at the show several times.

“Even though it’s just this tiny little thing it’s still a living thing ” he says. “It’s going to die at some point and it’s going to leave its shell so sometimes you have to work harder to find a good shell from something dead rather than to collect the live one.”

He definitely isn’t afraid to work harder; he ventures into marshes and tidal pools in search of new shells. Often that’s where he finds colorful intact shells that have not been broken up and battered by waves.

As a conservationist Semmel volunteers with the National Audubon Society and the North Carolina Sea Turtle Project. While out with these groups he visits Masonboro Island and Lea-Hutaff Island. The uninhabited barrier islands accessible only by boat are among his favorite collecting locations.

“I never really go and just sit at the beach. Every time I go I’m walking around and I’m looking ” he says. “When I’m on these islands I’m always looking around because again it’s places that people don’t go.”

Collecting the shells is only part of the preparation for the annual show. Semmel must also come up with a fresh theme and create his display cases. He says it is challenging to come up with original ideas.

“Whatever idea you have someone’s probably done that before ” he says. “It’s not just the shells it’s how you display that’s different.”

Semmel has a few tricks up his sleeve for this year including plans to include mirrors and lights to highlight his special shells.

The show includes both scientific exhibits as well as art pieces and each exhibit can range from one shell to many. There are also a variety of categories collectors can enter.

“That’s the thing about shell collecting ” he says. “It’s not an expensive hobby. The stuff is out there. You just have to get to the beach to find it.”