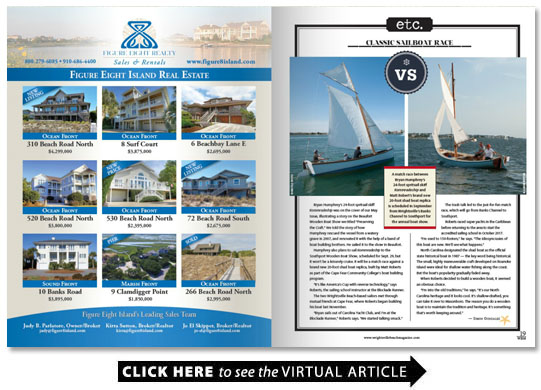 Bryan Humphrey’s 24-foot spritsail skiff Kommradeship was on the cover of our May issue illustrating a story on the Beaufort Wooden Boat Show we titled “Preserving the Craft.” We told the story of how Humphrey rescued the vessel from a watery grave in 2007 and renovated it with the help of a band of boat building brothers. He sailed it to the show in Beaufort.

Humphrey also plans to sail Kommradeship to the Southport Wooden Boat Show scheduled for Sept. 29 but it won’t be a leisurely cruise. It will be a match race against a brand new 20-foot shad boat replica built by Matt Roberts as part of the Cape Fear Community College’s boat building program.

“Bryan sails out of Carolina Yacht Club and I’m at the Blockade Runner ” Roberts says. “We started talking smack.”

The trash talk led to the just-for-fun match race which will go from Banks Channel to Southport.

Roberts raced super yachts in the Caribbean before returning to the area to start the accredited sailing school in October 2017.

“I’m used to 150-footers ” he says. “The idiosyncrasies of this boat are new. We’ll see what happens.”

North Carolina designated the shad boat as the official state historical boat in 1987 — the key word being historical. The small highly maneuverable craft developed on Roanoke Island were ideal for shallow water fishing along the coast. But the boat’s popularity gradually faded away.

When Roberts decided to build a wooden boat it seemed an obvious choice.

“I’m into the old traditions ” he says. “It’s our North Carolina heritage and it looks cool. It’s shallow-drafted you can take it over to Masonboro. The reason you do a wooden boat is to maintain the tradition and heritage. It’s something that’s worth keeping around.”