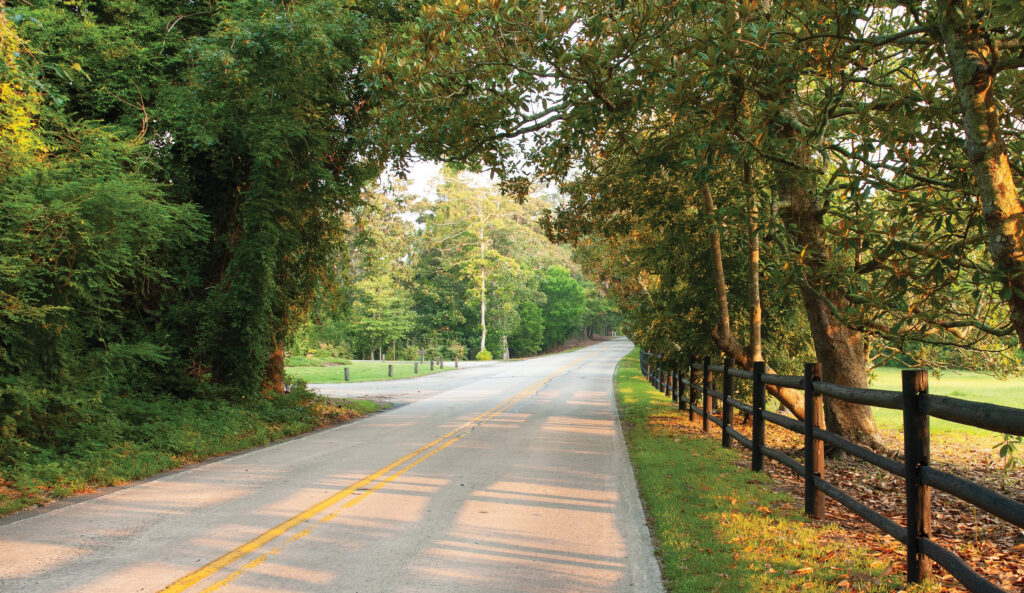 Traveling southeast on Airlie Road, motorists round a bend, and the view opens up to the Intracoastal Waterway. WBM File Photo

The siren song of the open road can be heard as soon as the weather warms up. Spring is the perfect time to get in the car, wind the windows down, open the sunroof or lower the top of the convertible, cue up the road trip playlist, and hit the highway.

It’s a low-cost way to enjoy the beauty of the area, to explore, and to see the sights while enjoying the wonderful feeling of the wind blowing through your hair before the hot, muggy summer months arrive and necessitate the rolling up of windows and constant a/c.

Sometimes it’s a joy to merrily head out to nowhere in particular, to randomly explore unknown roads — the more twisty, the better. But to truly appreciate the splendor and the history of the region, a more structured itinerary is helpful.

The North Carolina Department of Transportation caters to car enthusiasts who want to get off the beaten path and learn more about the state by designating 61 routes as scenic byways, selected to “allow motorists to experience a bit of the state’s history, geography and breathtaking scenery while raising awareness for the protection and preservation of these treasures,” the DOT website says.

The routes encompass the diversity of the state, running along the coast, through the Piedmont, and up to the mountains. They all have something in common. They are roads less traveled. There isn’t an interstate on the list. The idea is to get out of the fast lane, slow down, and enjoy the journey.

The DOT’s list of scenic byways includes a few in the Cape Fear region, including one just over the Heide Trask bridge from Wrightsville Beach.

This short but lovely path — which appears on an interactive map on the DOT website but not in a more detailed guidebook published by the organization — includes some of the quintessential features of the region.

Take a right on Airlie off Oleander Drive, and the road immediately parallels Airlie Gardens. The speed limit is 25 mph, allowing motorists plenty of time to enjoy the oaks draped with Spanish moss visible on the other side of the fence.

After about a mile, the road turns left and runs along the Intracoastal Waterway. Drivers can enjoy seeing not only a stretch of one of the most important waterways in the country but also an array of boats, from skiffs to luxury yachts. It’s also a good spot for nature viewing. There are often wading birds in the marsh grasses between the road and the ICWW, and occasionally dolphins can be seen breaking the water.

New Hanover County’s other scenic byway also features water views, but this time of a river and lake.

This route in downtown Wilmington goes through what NCDOT calls “one of the most scenic urban areas in the nation.” It includes views of the Cape Fear River, some of the city’s famous colonial-era buildings, and Greenfield Lake.

The byway begins north of downtown at the intersection of Martin Luther King Jr. Parkway and North Third Street, adjacent to the Isabel Holmes Bridge. After driving south on North Third Street, turn right on North Front and enjoy the sweeping view of the Cape Fear. Turn right onto Red Cross Street, which becomes North and then South Water Street. This section features the federal courthouse, the Riverwalk, and many of downtown’s unique shops and restaurants. The U.S.S. North Carolina can be seen across the river.

At the end of South Fifth, the byway enters Greenfield Park at East Lake Shore Drive and continues around Greenfield Lake. After becoming West Lake Shore Drive, this section ends at Carolina Beach Road. Take a right, then another on Willard Street. Follow it for two blocks and turn left onto South Fifth Street, passing again through the historic district.

After about a mile turn left onto Castle Street and then right onto South Third Street to see the city’s government buildings, historic churches, and Thalian Hall. A brief detour onto Market Street will take motorists past the Bellamy Mansion, First Baptist Church, and the Kenan Memorial Fountain.

Head back up Third Street to Martin Luther King Jr. Parkway to complete the loop.

This scenic byway begins in Brunswick County, half a mile north of Supply on N.C. 211 North at the edge of Green Swamp.

At more than 140 square miles, Green Swamp is composed of peat and muck timberland. In 1795, the state granted more than 170,000 acres to three businessmen who used the swamp for cutting lumber and peat. Today, the swamplands are owned by several large pulp and paper companies.

The drive starts by traveling north from Supply on N.C. 211, crossing the Royal Oak Swamp after two miles. Royal Oak Swamp is fed by the Green Swamp and flows into the Lockwood Folly River.

From the intersection of N.C. 211 and Little Macedonia Road (S.R. 1343/1448), drive through Green Swamp for the next 23 miles to Bolton. At the Brunswick/Columbus County line, cross Clear Branch Creek. Crusoe Island, founded some say in 1806 by political refugees from French Haiti, lies 15 miles southwest of the county line.

The byway passes close to Lake Waccamaw State Park near Bolton in Columbus County. The park features a 700-foot boardwalk and more than seven miles of trails to explore.

The Green Swamp drains into Lake Waccamaw, which was named around 1733 for a local American Indian tribe. After passing Lake Waccamaw, continue to Bolton, which was settled in 1889 and named for a lumber company that once operated in the area.

Continue north on N.C. 211 to pass through the Friar Swamp. The route passes into Bladen County through large pine forests, planted for pulp and paper use, toward Bladenboro. About three miles north of the county line, the road turns and parallels the CSX railroad line. The byway ends at the intersection of N.C. 211 and N.C. 242 east of Bladenboro, eight miles northwest of Clarkton.

This scenic byway begins at the intersection of N.C. 133 and Plantation Road (S.R. 1529) near Southport and follows Plantation Road toward the Brunswick Town State Historic Site. At just three miles it is one of the shortest in the state, but it is steeped in history.

Shortly before the byway begins, N.C. 133 crosses Allen Creek, once known as Lilliput Creek for the plantation at its headwaters. Granted to Eleazar Allen in 1725, Lilliput Plantation was named for the imaginary country in Gulliver’s Travels.

Allen Creek joins the Cape Fear River near Orton Plantation. Orton Plantation, built around 1725 by Roger Moore, overlooks the river on Orton Point. It was later owned by Royal Gov. Benjamin Smith, who is buried nearby at St. Philips Anglican Church.

The byway passes Orton Pond, built in 1810. Alligators can sometimes be seen sunbathing near the road at this point. Turn left onto St. Phillips Road (S.R. 1533) and follow it to Brunswick Town State Historic Site, where the byway ends.

The town, settled in 1725, was named for King George I, the Duke of Brunswick-Lüneburg. It was one of North Carolina’s primary colonial ports, and the county seat from 1764 to 1779. The site includes the ruins of St. Philips Anglican Church, completed in 1768, and the Civil War bunkers of Fort Anderson.

Brunswick Town endured attacks by the Spanish in 1748, and Revolutionary and Civil War battles. Resistance to the Stamp Act occurred in 1765 at the Russellborough House, the ruins of which are located north of the Brunswick Town Site. Fort Anderson was built here during the Civil War to help protect the port of Wilmington. The fort was evacuated in 1865 after a devastating Union attack that led to the fall of Wilmington. Another battery, Fort Lamb, was located just south on Price’s Creek.

This scenic drive begins about an hour away from Wilmington in Elizabethtown, the Bladen County seat. The county was named for Martin Bladen, the state commissioner of trade and plantations from 1717 to 1746. Elizabethtown, settled in 1773 and possibly named for Queen Elizabeth I, was the site of the 1781 Revolutionary War Battle of Elizabethtown, where Whigs broke the Tories’ (colonials devoted to England) power by driving them into a ravine, now known as Tory Hole, along the Cape Fear River.

From Elizabethtown, travel north on U.S. 701 to N.C. 242. Cross the Cape Fear River and enter the Bladen Lakes State Forest. About four miles north of the river is Jones Lake. Jones Lake, and nearby White Lake, Singletary Lake and Lake Waccamaw, are known as meteor lakes or Carolina bays, thought by some to have been formed by ancient meteor showers. They gathered water and decomposed organic material over the years to create the fertile farmlands along this route.

From Jones Lake State Park, the byway passes through the Turnbull Creek Valley. The fields to the right are part of the Big Colly and Cypress Creek bays. The drive briefly enters Cumberland County, named for the Duke of Cumberland, a son of British King George II, who led English troops to victory over the Scots at the Battle of Culloden near Inverness, Scotland, in 1746. Ironically, the area was settled by Scottish Highlanders, the people defeated by the duke.

At the Cumberland/Sampson County line, cross the South River and continue to Roseboro.

Cross Little Coharie Creek north of Roseboro, and travel to Salemburg, founded in 1874 and named for Salem Academy, located in the town. The school was the forerunner of the North Carolina Justice Academy, where state law enforcement officers obtain advanced education. A mural depicting the heritage of the area is displayed in town.

The byway ends at the junction of N.C. 242 and U.S. 421, four miles south of Spivey’s Corner in Sampson County. Located at the headwaters of Little Coharie Creek, Spivey’s Corner is home of the annual Hollerin’ Contest.