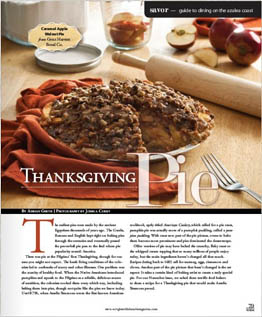 The earliest pies were made by the ancient Egyptians thousands of years ago. The Greeks Romans and English kept right on baking pies through the centuries and eventually passed the proverbial pie pan to the land where pie popularity soared: America.

There was pie at the Pilgrims first Thanksgiving though for reasons you might not expect. The harsh living conditions of the colonists led to outbreaks of scurvy and other illnesses. One problem was the scarcity of healthy food. When the Native Americans introduced pumpkins and squash to the Pilgrims as a reliable delicious source of nutrition the colonists cooked them every which way including baking them into pies though not quite like the pies we know today. Until 1796 when Amelia Simmons wrote the first known American cookbook aptly titled American Cookery which called for a pie crust pumpkin pie was actually more of a pumpkin pudding called a pompion pudding. With crust now part of the pie picture ovens to bake them become more prominent and pies dominated the dessertscape.

Older versions of pie may have lacked the crunchy flaky crust or the whipped cream topping that so many millions of people enjoy today but the main ingredients havent changed all that much. Recipes dating back to 1685 call for nutmeg eggs cinnamon and cloves. Another part of the pie picture that hasnt changed is the art aspect: It takes a certain kind of baking artist to create a truly special pie. For our November issue we asked three terrific local bakers to share a recipe for a Thanksgiving pie that would make Amelia Simmons proud.

Looking for an Italian Thanksgiving pie? You may be out of luck there but you can still give thanks for La Gemma (2323 South 17th Street 910-338-1885) a big taste of Italy on the Cape Fear Coast. Opened in December 2008 by Roberta and Jim Campani La Gemma has been turning out delectable panettones cookies pies and more ever since. “I like to let people give into temptation ” says Roberta. “Homemade baking is like a religion here.” The Campanis will gladly and deliciously bake double pumpkin chiffon or hazelnut almond apple pie and Brittani Brooker the new head baker is happy to make just about any type of pie. “As long as we have the ingredients we can make it ” Brooker says smoothing out the icing on a small chocolate torta. Perhaps the sweetest part of La Gemma is how much love the bakers put in their pies and cakes. “We love what we do ” says Jim. “We have a passion for food.”

Mix all ingredients together

Chris Flanagan a baker at legendary Sweet & Savory Bake Shop & Caf (1611 Pavillion Place 910-256-0115) has a long list of interesting and delectable pies that hes more than happy to bake: Caribbean fudge for instance which features a shot of rum for a little extra flavor. Though people line up around the block for that one Sweet & Savorys most popular pie is their key lime pie. “We sell twice as many of those as any other ” says Flanagan. For Thanksgiving Sweet & Savory is inundated with pie orders: pumpkin pecan chocolate and Dutch apple. “We get about 150 orders over the holiday. I would guess we make 300-350 pies.” Heres how he bakes the popular Dutch Apple.

Pre-heat the oven to 375 degrees. Mix the pie ingredients and topping ingredients in separate bowls. Pour the pie filling into the crust and smooth out then lay the topping over it. Bake for one hour.

The renowned Great Harvest Bread Company (5327 Oleander Drive 910-793-2330) makes pies in any and all flavors with a special focus on whats in season: key lime blackberry and blueberry during the summer; peach and cherry during the spring; apple and pecan during the fall. “My personal favorite is the sour cherry ” says Samantha Smith UNCW graduate and longtime Great Harvest manager. Some of Great Harvests most popular Thanksgiving pies are the caramel apple walnut traditional pumpkin and for those with a sweet tooth that just wont quit the chocolate chip pecan. With more than 400 orders during the 48 hours before Thanksgiving Day Smith and the crew bake themselves silly. “We dont go home during those two days ” Smith says. And if you want your holiday kitchen to have that just-baked aroma of homemade pie in the oven Great Harvest can make your pie to order and freeze it so you can bake it at home. If youre in the mood to do it all yourself heres one you have to try.

Toss apples with lemon juice and set aside. Finely dice caramels toss with the nuts flour and salt and set aside. Combine remaining flour with sugar spices and lemon zest. Toss in apples and mix thoroughly. Place into pie crust and level the top. Sprinkle topping and dot butter across top of pie. Bake on a foil-coated cookie sheet in a 350-degree oven for 1 hour and 15 minutes. Let sit before serving.