Flotilla Time
The North Carolina Holiday Flotilla lights up the night sky over Wrightsville Beach … but thats not all!

Think raising money for charities and beach re-nourishment has to be dull? Think again. On Friday November 26 and Saturday November 27 Wrightsville Beach will hold its 27th annual North Carolina Holiday Flotilla extravaganza. Since 1983 dedicated volunteers have made the Flotilla a main attraction in our area a “must-see event” for more than 50 000 people.

This years Flotilla starts on November 6 with the 3rd annual 5K run. On November 26 a Tree Lighting Ceremony including a “Visit with Santa ” will be hosted by Toys for Tots at Wrightsville Beachs Town Hall and the marvelous Launch Party will be held at the Blockade Runner Beach Resort. The fabulous Festival in the Park will be held on November 27. As the festival winds down thousands will flock to the docks decks and shorelines to grab great seats for the most anticipated event of the weekend The Holiday Flotilla.

The spectacular illuminated boat parade proceeds up Motts Channel along South Harbor Island to the bridge and then past the judges booth on Banks Channel completing its course at the Coast Guard Station and kicking off the holiday season with a glittery glistening showcase of lights pyrotechnics and shimmering displays. Santa himself will cruise the channel and help the Cape Fear region ring in the holiday season with style.

For more information visit the Flotilla website at www.ncholidayflotilla.org

Celebrating independent film and bringing people together for 16 years.

Since its inception in 1994 Cucalorus Film Festival has earned a stellar international reputation for screening intensely independent and innovative films. For four fantastic days in November Cucalorus presents a wide variety of films in venues across the Port City and separates itself from the vast majority of festivals around the world by staying true to its non-competitive nature: Cucalorus presents no awards at the festivals conclusion. Instead the focus of the festival is to bring people together to celebrate discover and create independent films.

Some films to celebrate this year? The New Year directed by Brett Haley won Best Narrative Feature at the 2010 Sarasota Film Festival; Dummy Jim directed by Matt Hulse tells the incredible story of James Duthie a deaf Scottish man know as Dummy Jim who some 60 years ago cycled from the small fishing town of Cairnburg Scotland to the Arctic Circle 3 000 miles in three months with a budget of 12 Euros a day (about $15); and Regular Kids a charming short film directed by WBM features editor Richard Leder that presents the true story of a circus family that rediscovers the magic of life and living on Halloween night.

Cucalorus was named one of the finest “Film Festivals for the Rest of Us” by Time magazine and as one of the “Top Twenty Events in the Southeast” by the Southeast Tourism Society. This year Cucalorus 16 expects 10 000 people to attend the festival. Make sure youre one of them.

From dark adult cautionary tale to the beloved holiday ballet we know and cherish today.

The Wilmington Ballet Company celebrates this holiday season at Thalian Hall with a full-length production of The Nutcracker Ballet. Most everyone knows the basic Nutcracker story of Clara and her amazing adventure with Herr Drosselmeyer the Mouse King and the Sugar Plum Fairy but few know where when or how this epic tale originated.

The history of The Nutcracker Ballet can be traced back to 1816 when German romantic author E.T.A. Hoffmann published a book called The Nutcracker and The Mouse King. The story was described as a somewhat dark tale not initially intended for children because its core concept was to depict the desperate evil side of mankind. In 1890 A. Vsevolosky the director of Imperial Theaters in Russia planned to rewrite the story into a more accessible ballet called The Nutcracker Ballet. Vsevolosky had previously directed the ballet Sleeping Beauty and planned to use the same choreographer Manius Petipa and composer Peter I.Tchaikovsky who had helped make Sleeping Beauty such a success.

Before the new ballet opened Tchaikovsky premiered the music he had composed for it an eight-part concert version that was an immediate success. On December 18 1892 The Nutcracker Ballet world premiere was held at the Maryinsky Theater in St. Petersburg Russia. Reviews were surprisingly mixed but as the years passed the ballet was performed around the world again and again until it became one of the most beloved ballets of all time. Though it has been reinvented reconceived and performed thousands and thousands of times it maintains its wonderfully nostalgic holiday feel with every iteration.

This year the Wilmington Ballet Company will perform The Nutcracker Ballet on Thalian Halls main stage on November 19-21. Tickets can be purchased at the Thalian Hall box office (310 Chestnut Street 910-632-2285) or online at www.thalianhall.com. 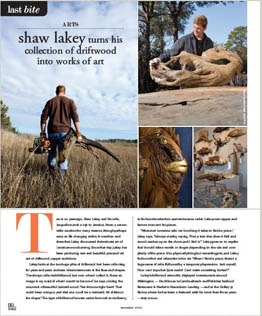 Shaw Lakey turns his collection of driftwood into works of art

Ten or so years ago Shaw Lakey and his wife Jacqueline took a trip to Jamaica. It was a memorable vacation for many reasons though perhaps none as life changing as this: It was then and there that Lakey discovered the intricate art of Jamaican wood carving. Since that trip Lakey has been producing rare and beautiful pieces of art out of driftwood copper and stone.

Lakey looks at the two huge piles of driftwood hes been collecting for years and years and sees ideas interwoven in the lines and shapes. “Ive always collected driftwood but now when I collect it I have an image in my mind of what I want it to become ” he says circling the mountain of beautiful twisted wood. “See this one right here? That could be an octopus and that one could be a mermaid. Its all about the shape.” The type of driftwood he uses varies from oak to mulberry to his favorite selection eastern incense cedar. Lakey uses copper and bronze to accent his pieces.

“Whenever someone asks me how long it takes to finish a piece ” Lakey says “I always start by saying First a tree dies then it falls and soon it washes up on the shore and I find it.” Lakey goes on to explain that it could take a month or longer depending on the size and complexity of the piece. Its a physically tiring but rewarding job and Lakey finds comfort and relaxation in his art. “When I finish a piece theres a huge sense of relief followed by a temporary depression. I ask myself How can I top what I just made? Can I make something better?”

Lakeys driftwood artwork is displayed in restaurants around Wilmington Deck House in Carolina Beach and Fishbites Seafood Restaurant & Market in Masonboro Landing and at the Gallery @ Racine where he has been a featured artist for more than three years.