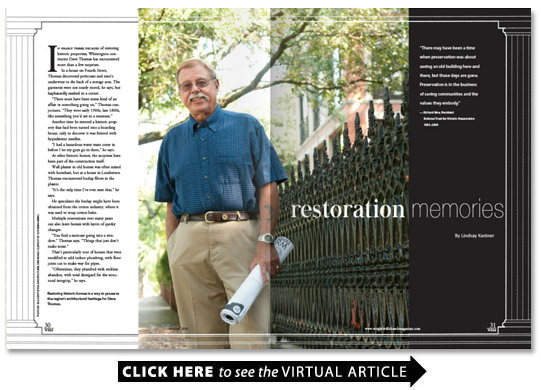 “There may have been a time when preservation was about saving an old building here and there but those days are gone. Preservation is in the business of saving communities and the values they embody.”

In a house on Fourth Street Thomas discovered petticoats and men’s underwear in the back of a storage area. The garments were not neatly stored he says but haphazardly stashed in a corner.

“There must have been some kind of an affair or something going on ” Thomas conjectures. “They were early 1900s late 1800s like something you’d see in a museum.”

Another time he entered a historic property that had been turned into a boarding house only to discover it was littered with hypodermic needles.

“I had a hazardous waste team come in before I let my guys go in there ” he says.

At other historic homes the surprises have been part of the construction itself.

Wall plaster in old homes was often mixed with horsehair but at a house in Lumberton Thomas encountered burlap fibers in the plaster.

“It’s the only time I’ve ever seen that ” he says.

He speculates the burlap might have been obtained from the cotton industry where it was used to wrap cotton bales.

Multiple renovations over many years can also leave homes with layers of quirky changes.

“You find a staircase going into a window ” Thomas says. “Things that just don’t make sense.”

That’s particularly true of houses that were modified to add indoor plumbing with floor joists cut to make way for pipes.

“Oftentimes they plumbed with reckless abandon with total disregard for the structural integrity ” he says.

Over the years Thomas has worked on everything from modest homes to mansions but he is best known for historic restoration projects.

One was the restoration of the former residence for the Bishop of the Episcopal Diocese of East Carolina at 510 Orange Street.

In 1905 the Episcopal Diocese tore down the existing house on the property and began construction of the current structure.

“They said ‘Let’s build something in the new style ‘ and boom! You’ve got that beautiful Neoclassical Revival house ” says architectural historian Ed Turberg. “Everyone across the street probably said ‘Boy don’t our houses look old-fashioned.'”

Thomas started work on the home just after Hurricane Fran battered it in 1997.

“When we got there the hurricane had just hit ” Thomas says. “There was a lot of damage. The biggest consequence was that on the first floor there had been a beautiful arbor a plaster relief. It was in terrible condition.”

Val Cleary of Harp Builders referred Thomas to a master plasterer in Ireland who flew to North Carolina to handle the restoration work. The craftsman recreated individual flowers and leaves to replace damaged pieces of plasterwork.

“Then he drew the vines with a baker’s icing bag or something ” Thomas said. “It was really beautiful.”

The renovation also included stripping layer upon layer of paint from the orange brick exterior and constructing a two-story side porch that did not exist at the time the renovation began but appeared in an old sketch of the house by noted artist Claude Howell.

Thomas also took on the Neoclassical home at 1710 Market Street that once belonged to Mary Bridgers.

Bridgers who developed Wilmington’s Carolina Heights neighborhood died before the house was completed after she fell at the construction site in 1910. It then changed hands several times even serving as a fraternity house at one point Thomas says.

The front was in good shape but the rear was not; large oak trees that sheltered the house contributed to moisture damage and a termite infestation.

“The back of it had a lot of decay and that’s where the termite damage was ” Thomas says. “We took the whole rear off.”

“It looks like the White House ” Turberg says of the restored property.

Historic restoration work comes with a particular set of challenges says architect Cothran Harris who worked with Thomas on the house.

“You’re working with damage to a facility you’re trying to honor the original architectural details and you’re trying to figure out how to make the project work with modern appliances heating and air conditioning and so on ” Harris says. “Dave is particularly well suited for it by his personality. He has the patience to track things down and do what is needed in any one particular situation.”

Another memorable project was a restoration of the 10 000-square-foot Governor Dudley Mansion. The original mansion was built in 1825 for North Carolina’s first elected governor Edward B. Dudley. Subsequent owners expanded the home over the years adding large wings to the first floor and then extending them to the second story.

“They didn’t want to put it back to the way it was in 1825 because you’d be tearing a lot of the house away ” Turberg says.

Architect Bruce Bowman says the mansion’s interior finishes were in good shape when the restoration began.

“The work was more in terms of correcting goofy things in the floor plan ” he says.

“It was an awkward house ” he says. “There was no real good transition from the basement to the main living level. It had been an apartment down there and there was a very plain unattractive and code-violating staircase that went down where anyone would bump their head. It wasn’t suitable to really be part of a functioning home.”

The renovations included removing the staircase and replacing it with a large half-circle stairway connecting the home’s solarium to the basement area which includes a staff apartment and a workout/recreation area for the homeowners.

“The basement has achieved its potential ” Thomas says.

Upgrades included putting in a geothermal heating and cooling system and restoring the widow’s walk with its compelling view of the Cape Fear River.

Thomas says he never intended to go into the restoration business. In college while majoring in philosophy and religion he began doing construction jobs to make ends meet framing houses in Kings Grant and elsewhere.

Framing segued into carpentry work on sailboats where he learned how to work with the odd spaces and shapes that he would later encounter in historic homes.

Thomas obtained his contractor’s license in 1986 but missed the deadline for advertising in the yellow pages. He placed a classified newspaper ad instead. Homeowners started calling and D.P. Thomas Construction took off.

Many of Wilmington’s older homes had fallen into disrepair in the decades after Atlantic Coast Line Railroad moved its headquarters out of the city. Homeowners responding to the ad told Thomas they couldn’t find contractors willing to work on historic properties.

He wasn’t intimidated. He was confident that if he could work on sailboats he could handle quirky old homes.

He has handled them so well that in May 2015 he received the Historic Wilmington Foundation’s Katherine Howell Award which recognizes individuals for furthering the group’s preservation mission.

“Our architectural heritage is just as important as our fine arts heritage but it doesn’t get to live in a museum ” Thomas says. “It’s out in the elements.”