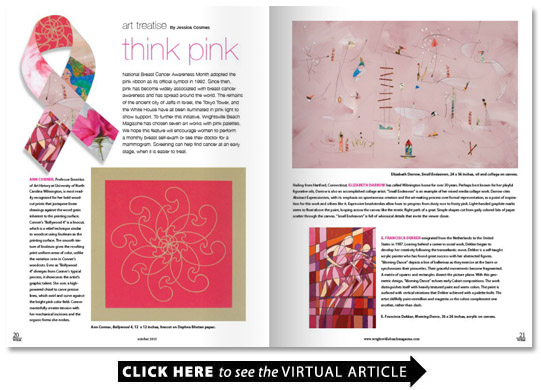 National Breast Cancer Awareness Month adopted the pink ribbon as its official symbol in 1992. Since then pink has become widely associated with breast cancer awareness and has spread around the world. The remains of the ancient city of Jaffa in Israel the Tokyo Tower and the White House have all been illuminated in pink light to show support. To further this initiative Wrightsville Beach Magazine has chosen seven art works with pink palettes. We hope this feature will encourage women to perform a monthly breast self-exam or see their doctor for a mammogram. Screening can help find cancer at an early stage when it is easier to treat.

Ann Conner Professor Emeritus of Art History at University of North Carolina Wilmington is most readily recognized for her bold woodcut prints that juxtapose linear drawings against the wood grain inherent to the printing surface. Conner’s “Bollywood 4” is a linocut which is a relief technique similar to woodcut using linoleum as the printing surface. The smooth texture of linoleum gives the resulting print uniform areas of color unlike the variation seen in Conner’s woodcuts. Even as “Bollywood 4” diverges from Conner’s typical process it showcases the artist’s graphic talent. She uses a high-powered chisel to carve precise lines which swirl and curve against the bright pink color field. Conner masterfully creates tension with her mechanical incisions and the organic forms she evokes.

Hailing from Hartford Connecticut Elizabeth Darrow has called Wilmington home for over 30 years. Perhaps best known for her playful figurative oils Darrow is also an accomplished collage artist. “Small Endeavors” is an example of her mixed media collage work. Darrow cites Abstract Expressionism with its emphasis on spontaneous creation and the art-making process over formal representation as a point of inspiration for this work and others like it. Expressive brushstrokes allow hues to progress from dusty rose to frosty pink. Light-handed graphite marks seem to float above the paint looping across the canvas like the erratic flight path of a gnat. Simple shapes cut from gaily colored bits of paper scatter through the canvas. “Small Endeavors” is full of whimsical details that invite the viewer closer.

E. Francisca Dekker emigrated from the Netherlands to the United States in 1987. Leaving behind a career in social work Dekker began to develop her creativity following the transatlantic move. Dekker is a self-taught acrylic painter who has found great success with her abstracted figures. “Morning Dance” depicts a line of ballerinas as they exercise at the barre or synchronizes their pirouettes. Their graceful movements become fragmented. A matrix of squares and rectangles dissect the picture plane. With this geometric design “Morning Dance” echoes early Cubist compositions. The work distinguishes itself with heavily textured paint and warm colors. The paint is surfaced with vertical striations that Dekker achieved with a palette knife. The artist skillfully pairs vermillion and magenta so the colors complement one another rather than clash.

Jan Hoppe has earned the distinction as a Mississippi Master Gardener so her floral subject matter is a natural choice. The artist now lives in New Bern. She has worked as a freelance graphic designer and writer but has recently dedicated herself to painting. “Clear Choice” challenges the idea of a traditional floral still life. Rather than an overflowing bouquet a menagerie of clear vessels surround four blooms. Faceted glass strikes overlapping shadows bending and distorting light. Vibrant pink azaleas which the artist grew herself break from the white background. The high-contrast composition is finely rendered allowing the folds of each delicate petal to seem all the more dramatic.

Awarded the Landfall Foundation’s Annual Art Show “Best in Acrylic” for the past three years Lisa Lightfoot has quickly embedded herself in Wilmington’s Fine Arts community. Previously an interior designer in Highpoint Lightfoot moved to Wilmington in 2011 to pursue her career as an artist. Never having received formal training Lightfoot credits her talent to the Lord. Lightfoot describes her art-making process as an anointing and her painting as a conduit of God’s creativity. Lightfoot began “Passion for Pink” at a 10-day Wilmington prayer and worship event in September following our request to participate in painting prophetically for breast cancer awareness. She says cancer is chaotic; it is not from heaven not from God. The paintings drips are like tears from heaven over the cancer. God is not trying to teach people through sickness. He is weeping over the ones that want to have healing through His word Psalm 103.

Joan McLoughlin is an abstract acrylic painter. Exhibiting up and down the Eastern Seaboard for the past decade McLoughlin’s career has recently taken off in Wilmington. She was selected as the winner of the 2015 Wilmington Arts Association’s Spring Art Show poster contest. She will also be a featured artist at MC Erny Gallery later this fall. “First Bouquet” is one of McLoughlin’s floral abstract paintings. Broad gestural strokes suggest the outward spiral of rose petals as they bloom. McLoughlin further deconstructs her subject matter breaking the flower down to only streaks of green and pink paint. “First Bouquet” offers a gradation of technique from the representational to the abstract.

Lois Dewitt is a widely celebrated art instructor known for her website free-online-art-classes.com. Her online tutorials were even recently featured in The New York Times. Dewitt conducts all of her lessons from her Wilmington studio. When not teaching others how to harness their creativity she turns to oil painting. Her “Butterfly Lady” is a vibrant imaginative scene. Neon colored flora populates the background. As if serenely emerging from her native hollow the titular character stands before the viewer ivy still wrapped around her form as she proudly displays her wings. Upon closer inspection dozens of smaller butterflies emerge from the composition. Dewitt layered stencils of butterflies to achieve the distinct work.