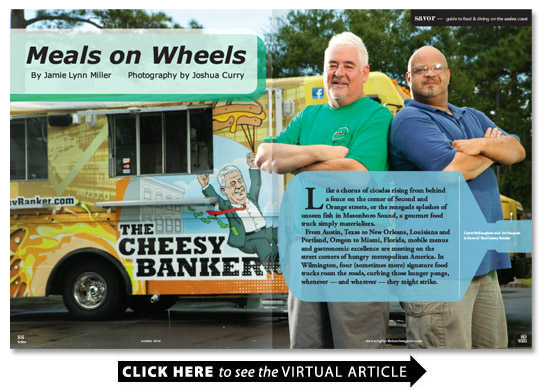 Like a chorus of cicadas rising from behind a fence on the corner of Second and Orange streets or the renegade splashes of unseen fish in Masonboro Sound a gourmet food truck simply materializes.

From to and to mobile menus and gastronomic excellence are meeting on the street corners of hungry metropolitan . In four (sometimes more) signature food trucks roam the roads curbing those hunger pangs whenever and wherever they might strike.

After working for Wachovia Bank for 27 years Carter McKaughan had grown tired of wearing a suit and tie. Last April he unbuttoned his collar quit his job and walked off into the economic unknown. It was a leap of faith but it landed him alongside his next great venture.

I spent quite a bit of time talking with a man whod been with Bank of America for 20 years and now runs a food truck says McKaughan and I got inspired.

Custom-made in the bright yellow truck says it all: McKaughans fast food fare is nothing if not cheesy. With the talents of local chef Irv Vasquez the pair put on a friendly face matched by exemplary taste behind the grill and out the front window.

The Bankers top billed Too Big to Fail claims The Banker has cleaned out the vault. The grilled mac and cheese caramelized onions and slow-roasted butt is slathered with a heaping helping of BBQ sauce cushioned on toast. But order it with caution: I feel a nap coming on warns the menu postscript.

While toast is all the rage patrons have the option of the wrap for Healthy Minded Bankers try the turkey Havarti avocado and sliced tomatoes in a sun-dried tomato tortilla with some crispy bacon nestled in the middle just to keep it real.

A burger worth doin time for!

Its dark. Its thunderstorm-y. Youre studying and you have insomnia and youre hungry. Its 11:32 p.m. and you brazenly leave the house without an umbrella and wander down and there in an off-hours barren food-stuffs desert you see the oasis.

I lived in Jersey and says long-time restaurant man chef and owner James Smith. I had some bad weather down there so I finally migrated north he says. Familiar with the food truck taste sensations in those areas he saw an opportunity to bring the Best Burger Ever to .

Theres something about a cheap bun and bad fries that just makes me mad Smith declares. Our fries are hand-cut and we use Neomonde brioche buns from ; they really stand up well to the burger.

A cry is heard in line. Its HUGE says a slightly built woman a little overwhelmed by the serving size of her cheeseburger. How am I supposed to eat this?

One bite at a time! yells a man behind her with a chuckle.

Its a big deal to cook on a wood pit

“Its a big deal to cook on a wood pit BBQ declares Ed Coulbourn II former Realtor North Carolina State BBQ Champion and man behind s first food truck. He speaks passionately about wood-smoked barbeque as he leans through the order window: So many people have sold out by using gas or propane. At Poor Piggys we use oak and hickory pellets for that deep smoked flavor. Were the only place in town doing it.

Regularly parked next to Port City Produce on while making cameos downtown in Poor Piggys has a loyal following. From blues musicians to hard-core BBQ fans dedicated Piggy lovers will brave a monsoon or splash across a moat to get their BBQ brisket and rib fix.

The Taste du Jour is an overflowing helping of beef brisket fresh coleslaw and that signature barbeque sauce for which Colbourns won many accolades. And of course theres a sizzlin side of hush puppies everyones favorite garnish.

Says Coulbourn: If for some reason you dont like fried food you still love hush puppies.

Its a completely different beast

Having lived in and Austin where food trucks are always on the prowl Daily Special owner James Algee and his wife decided that could use a good dose of mobile food fanfare. The Algees present The Daily Special with an ever-changing rotating menu prepared by a revolving door of culinary teams. Franchising signature dishes from area restaurants the Algees have revolutionized the food truck concept.

Menus vary daily. Hop online and pick a day or pick your restaurant or pick your meal then check the sites Hungry for Food section to see where the three shall converge. You may find specials from Nicks Diner when the trucks parked outside Satellite Lounge or Mixtos steaming hot tamales served from the window of the Daily Special parked at the Battleship. Craving Folks Caf for breakfast? Seek and find the truck near the serving empanadas and a highly sought-after cup of Folks coffee. Change is the only constant in this food truck evolution.

Its a new thing inside of a new thing says Algee referring to the varied daily menu selection four different mealtimes and the opportunity to sample some of the area restaurants favorite tastes served by that restaurants culinary team at all hours of the day and night.

We can go back to the same spot with a totally different menu and try out a different audience. Its a completely different beast than any other food truck. Other than that? Its exactly the same says Algee with a laugh.

GPS the Daily Special and find your next craving.