Of Vines and Dogs 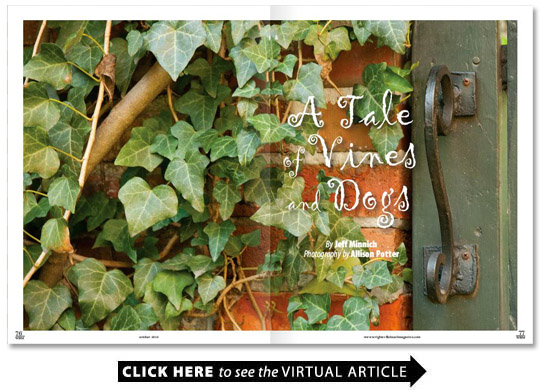 A great mind hides behind a tangle of gardenia camellia red cannas and banana shrub moonflower passionflower hibiscus hybrids and fig. The gardener is a Harvard-trained architect with an intense interest in botany and horticulture thats evident as he begins to rattle off common and botanical plant names with ease.

Edward McCaleb and his family moved to 15 years ago from Pawleys . McCaleb is from . He has lived in the house for about 12 years. Built around 1920 the McCalebs created a Southern garden true to the homes early 20th century origins and his roots in .

At the time the house was built gardeners readily shared their plants with family friends and neighbors and neighboring gardens were much alike. Cuttings also called starts or slips were shared for rooting and seedlings or sections of plants that had been divided were also shared. Many gardeners have come home to the delightful surprise of a start hanging on their doorknob or a baby plant sitting on their front step. The old Southern tradition of starting gardens this way continues today. Pass-along plants hold memories too of loved ones whove passed on. The plants are a way to keep the memories alive and pass them on to the next generation.

McCalebs is clearly a collectors garden. He particularly likes old-fashioned flowers and vines. About half of the old fashioneds are from passed along by his parents and grandmother he says four oclocks crinum lilies trumpet vine. The trumpet vine was a start dug up from his fathers garden.

My fathers vine had a trunk eight inches thick; a lot of hummingbirds came to visit him as he sat under it when he was ill McCaleb says.

He has gardenias near the front porch grown from cuttings: moonvine (Ipomoea alba) and night-blooming Cereus (Epiphyllum oxypetalum) both with heavenly nighttime fragrances; cypress vine (Ipomoea quamoclit) also a favorite of hummingbirds and banana shrub (Michelia figo) which Smells like Juicyfruit gum he says. Camellias especially the winter and spring-blooming japonicas are scattered throughout the garden to complete the four seasons of color. He has many of the old-standard varieties. His favorite is camellia japonica Mathiotiana a bluish-tinged red with huge seven-to-eight-inch flowers.

And gloriosa daisy (Rudbeckia gloriosa) is a great plant for everyone McCaleb says. The flowers are yellow with a mahogany center and bloom all summer in .

Other old-fashioned favorites include the blue lobelia (Lobelia syphilitica once used to treat syphilis) goblin flower (Gaillardia) and spider flower (Cleome hasslerana) all grown from heirloom seeds acquired from another architect Thomas Jefferson from his garden. There are cannas lilies rain lilies rescued from a field fig and gingers. A lovely gladiola (Gladiolus dalenii) was rescued from a cemetery about to be destroyed. Its flowers are orange fading to a neon-yellow throat. It was widely collected in the 19th century the Victorians loved it. He has a vitex grown from seed collected on the property of a former school now leveled.

If you run your hand along the stems he says you get a great scent like lavender.

As old fashioned as this garden may sound it is firmly rooted in the 21st century. McCaleb calls it his tiny experimental ecosystem. Hes interested in sustainable gardens and has installed rain barrels to utilize rainwater run-off. He plants to attract bees butterflies birds and beneficial insects. Hummingbirds are frequent visitors. Hes installed a chinaberry tree beside his trash cans in hopes it will help to keep flies away naturally. Thomas Jefferson wrote that it would.

The fence line along the eastern side of the house features a vast collection of vines a favorite of the gardener. blue morning glories share the stage with the rest of the ensemble. McCaleb has a particular interest in collecting passion vines (Passiflora species). Currently he has five species growing on the street-side fence. Their exotic blooms are real showstoppers. Two of the species are native to : Passiflora incarnata maypop is a lovely pale lavender with purple highlights and the yellow passionflower Passiflora lutea. Other passionflowers include Passiflora Incense an aggressive and hardy hybrid with purple flowers; the white passion flower Passiflora subpeltata which flexes its outer petals back towards the stem; and Passiflora caerulia the common or blue passion flower. All turn the fence line into a summer and early autumn show.

He has a jumble of Carolina jessamine (Gelsemium sempervirens) and Japanese climbing fern (Lygodium japonicum) drape the back garden gate. Inside the back garden McCaleb hangs his orchid and fern collections on the fence for the summer. The plants enjoy the summer vacation outside too and thrive. This adds interest while keeping the plants out of their dogs reach.

McCaleb and his wife share another passion: rescue dogs. Theyre involved with Animal Rescue Flights an organization that moves animals from overcrowded shelters to families in other parts of the country who are willing to adopt them. Volunteer pilots assist with the effort.

The couples dogs (Winnie Ruby Boyo and Puck) have the run of the back garden where the loss of walnut and pecan trees opened it up. McCaleb has drawn up plans though he finds landscape architecture a bit more challenging than the building architecture he knows so well. Hes included in the plans a small pet cemetery.

Back in the days when this house was built one garden writer in the Landscape Garden Series (1921) wrote In democratic it is not the custom as it is in some European countries to have walls about the front of our places. We would rather give some consideration to the public and have in the space between the home and the street an area for the view and enjoyment of the passersby.