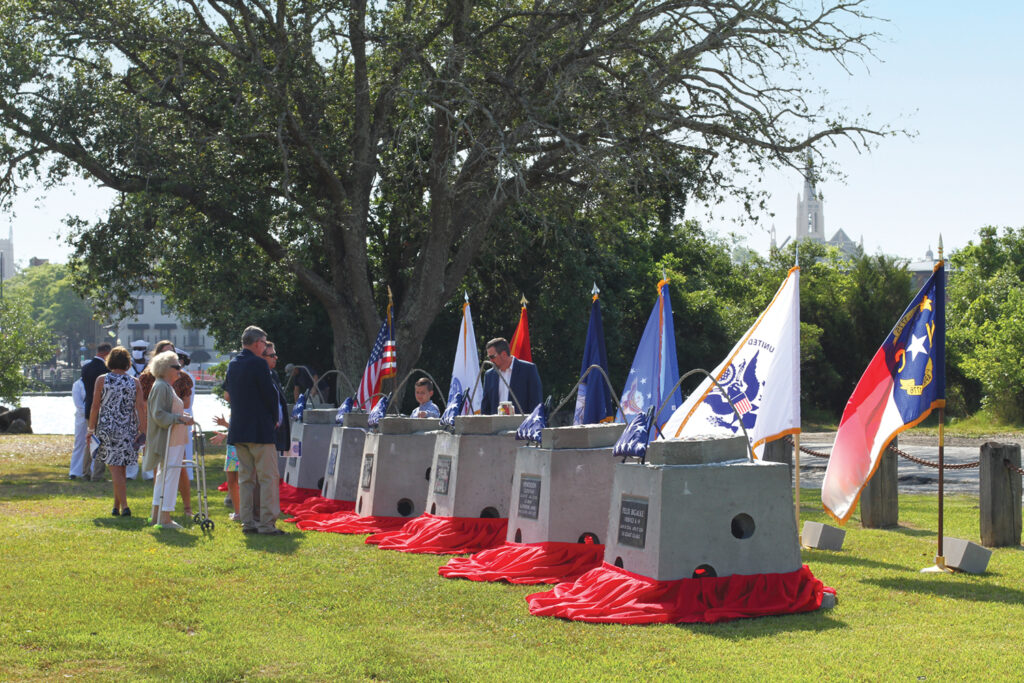 Like most good ideas, this one started with a “what if?”

Thomas Marcinowski read an article about divers taking the cremated remains of loved ones out to sea and spreading the ashes. A similar thing occurs at a paddle-out, when surfers scatter the ashes on the surface of the ocean.

Marcinowski is a retired U.S. Army major who now works as a physicians’ assistant at the Veterans Affairs clinic in Wilmington. What if, he thought, there was a way to honor those who served with a similar tribute? What if there was a way to do it so the deceased lived on, not just in the memory of their loved ones but in a manner that would benefit the environment?

He came up with a plan to incorporate the remains of those who honorably served into an artificial reef.

“He approached me and said, ‘What do you think about this concept?’” says Joe Irrera, a retired Marine Corps colonel. “I thought it was a phenomenal idea.”

Veterans Memorial Reef was founded as a nonprofit in 2019, with Marcinowski as CEO and Irrera as president. The organization worked with the North Carolina Department of Marine Fisheries for a site, and was granted access to AR-372, an artificial reef on a 160-acre site about five miles out from Wrightsville Beach.

The first ceremony took place on Memorial Day this year, with 10 markers containing the ashes of veterans lowered to the sea floor.

“The families said it was nothing short of absolutely beautiful and wonderful,” Irrera says. “They said it was fitting, very honorable, and very dignified. We could not have been more pleased because of how happy the families were.”

A service member from any military branch who honorably served is eligible for the Veterans Memorial Reef program. The organization verifies the status by reviewing a DD214, the document that provides proof of military service and cites any certifications and awards granted.

The family transfers the cremated remains into an aquatic urn, an aluminum tube sealed at both ends. The urn is placed inside a concrete memorial marker, with an area of wet cement on top.

“Family members can use that to personalize and memorialize their loved one,” Irrera says. “Kids, grandkids, can put handprints. One lady, her husband loved to fish, and she put his lures on it.”

A service is held on land the day after the memorial is sealed. Full military honors are rendered for each veteran, with a flag detail, a rifle detail if warranted, and a bugler to play taps.

The following day the memorials — each weighing about 1,200 pounds — are loaded onto a barge and taken to the site. A second boat takes family members out. After a short memorial service, each marker is lowered at a spot determined by a representative from the Department of Marines Fisheries, who is also on site.

“There are a couple of reasons why we did this,” Irrera says. “Part of the rationale is it is eco-friendly. An artificial reef attracts marine habitat and combats erosion. Also, we have four national cemeteries in North Carolina and five state cemeteries for veterans. They are filling up. Some aren’t accepting more burials. This is another alternative to alleviate the strain on land burials.”

Although not as convenient as a national or state cemetery, the Veterans Memorial Reef markers are accessible.

“Each memorial marker, there is a geographic coordinate associated,” Irrera says. “A grandson or family member can go fish over grandpa’s memorial, or dive on it.”