After 51 years, Wilmingtonian Hampton Tillery is reunited with Pumpkin Pie 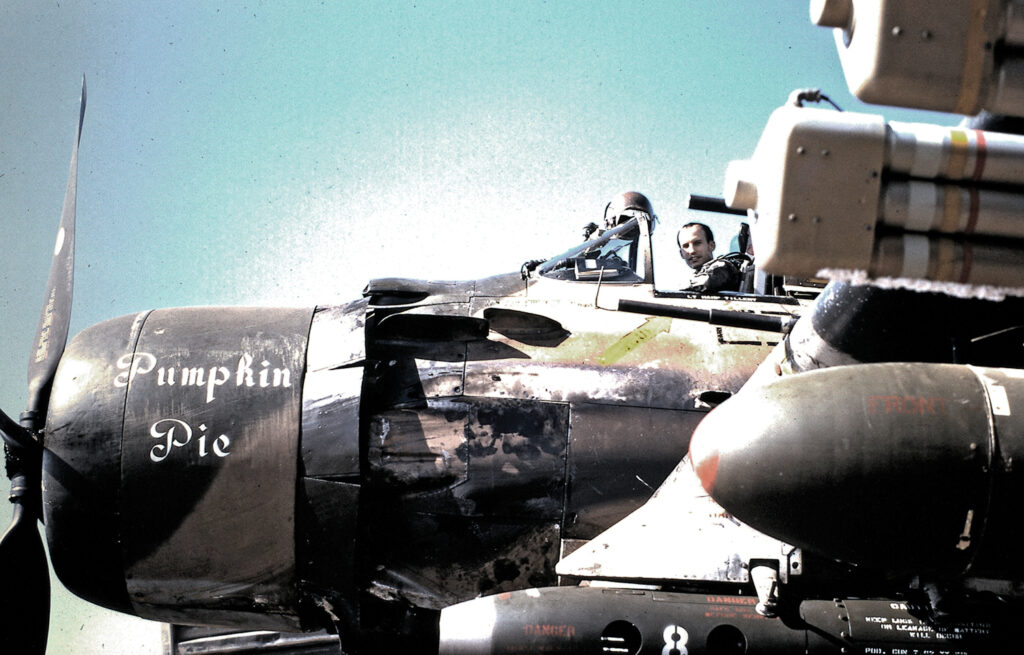 Lt. Hampton Tillery pilots an A-1H Skyraider he nicknamed Pumpkin Pie in Thailand during the Vietnam War in 1970. Courtesy of the Tillery Family

Half a century from the day when Lt. Hampton Tillery stepped from the cockpit of Pumpkin Pie, his A-1H Skyraider, in Southeast Asia, he was back. On July 21, 2021, Tillery settled into the very same cockpit, although this time the Skyraider was on the tarmac of the Tennessee Museum of Aviation in Sevierville, 9,000 miles from Vietnam.

How man and machine were reunited is a story of incredible odds, bravery, and patriotism.

Wilmington native, Hampton Tillery Jr. joined the U.S. Air Force in 1968. After earning his pilot’s wings, he deployed to Nakhon Phanom Royal Thai Air Force Base in Thailand in 1970 at the height of the Vietnam War. The initial disappointment about his assignment to an A-1H Skyraider — a piston-powered, propeller-driven single-seat attack aircraft — rather than a faster, higher-flying fighter soon vanished.

“Every day, whether flying close-air support for our ground-based troops or for special operations missions, we could see what we accomplished,” he said. “Flying a Skyraider was exactly where I wanted to be.”

At the end of his tour of duty 10 months later, he had flown 177 missions. He returned home and, like so many service members, picked up where he left off, completing his education with a degree in accounting from the University of North Carolina. Later, he joined a family-owned business in Wilmington, Atlantic Appliance and Hardware, founded in 1948 by his father, Hampton Tillery Sr., Gene Edwards and Harry Stovall Sr. Successive Tillery and Edwards generations still operate the Wilmington business.

While Tillery carried on with his life after Vietnam, Pumpkin Pie – named after a term of endearment for his wife — sat abandoned on a runway in Thailand.

Skyraiders first saw service in the Korean War. Twenty years later, during the Vietnam War, the highly durable aircraft were flown over Vietnam, Laos, and the Ho Chi Minh Trail for interdiction and close air support of ground forces as well as other highly sensitive missions. They were perfect for the job — able to remain at low altitude and stay over a target longer than most other aircraft.

The story of 11 Skyraiders among the more than 100 U.S. and foreign aircraft flown out of Vietnam to the U-Tapao Royal Thai Navy Airfield in Thailand is detailed in an article published in the December/January 1997 issue of Air & Space Magazine.

Brig. Gen. Henry Aderholt, chief advisor to the Royal Air Force in Thailand, worried about the planes falling into enemy hands and becoming a threat to Vietnam’s militarily weaker neighbors, including Thailand, Laos and Cambodia. But Aderholt had a soft spot for the rugged Skyraiders. Although the decks of U.S. ships leaving Southeast Asia were already crowded with more modern and valuable American aircraft, he decided to move as many as he could.

In May 1975, Aderholt convinced the Thai military to allow him to bring two Skyraider pilots, Roger Youngblood and Jack Drummond, to U-Tapao to fly the aircraft to a more secure location. At great peril due to the advancing North Vietnamese military and the unknown airworthiness of the planes, Youngblood and Drummond flew four Skyraiders from the southern coast of Thailand to Takhli Royal Thai Air Force Base in central Thailand. A year later, before retiring, Aderholt arranged (largely through unorthodox channels) for transport of the four now rare aircraft back to the U.S.

The planes were partially disassembled, taken from hangars by tractor, secured to barges, and floated on the Chao Phraya River to Bangkok. Five years later, Dave Tallichet, a warbird collector, learned of the Skyraiders’ existence and had the four planes shipped to Los Angeles via a Russian trawler.

Six more years would pass before the Skyraiders stored at the Orange County Airport found their permanent homes. Neal Melton, founder of the Tennessee Museum of Aviation, brought #139665, aka Pumpkin Pie, to Tennessee where it is today, restored and in flying condition to honor all A-1 Skyraiders and their pilots.

In 2012, word of Pumpkin Pie’s home at the Tennessee museum reached Hampton Tillery in Wilmington. Although he had been in contact with the museum administrators since that time, it wasn’t until this year that he was able to visit the museum and his aircraft.

On the tarmac under bright skies, Tillery, his wife, children, and a scattering of grandchildren and friends watched as the A-1H’s propeller came to life.

“The sound of the A-1’s radial engine is not like any other airplane — it’s not the amount of noise as much as the rhythm,” Tillery said. “It has its own sound.”

As thick gray smoke belched from the powerful 2,700 horsepower Wright engine, he added, “It’s everything I remembered, but the cockpit seems smaller.”

The four Skyraiders rescued from U-Tapao are housed at aviation museums in Colorado Springs, Colorado, Washington, D.C., Addison, Texas, and Sevierville, Tennessee. See the resources listed below to learn more about the Skyraiders, their long journey home, and how you can visit them.

Escape to U- Taphao by Ralph Wetterhahn

The A-1H Skyraider Comes to Life