Life Is Short — Take the Trip 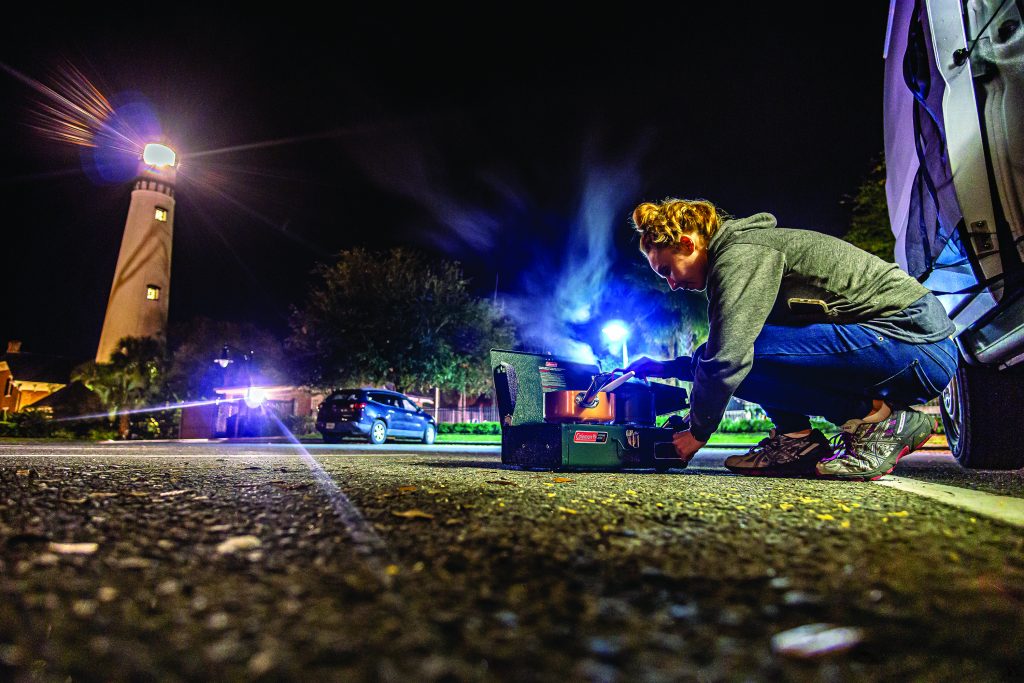 Roman prepares breakfast in a parking lot at the base of the St. Simons Island Lighthouse in Georgia. | Casey Roman

Hitting the open road with the windows down, music up, and breathtaking views framed by the windows and doors of your trendy conversion van might sound like a dream. The idyllic lifestyle is promoted on social media, where beautiful millennials showcase their picture-perfect van-dwelling lives.

But what is it really like to travel across the country alone in a 6-by-18-foot vehicle? The answer: Not as glamorous as you might think.

For Casey Roman, a series of undesirable events led to the decision to sell her home and material belongings and hit the highway.

After her beloved job as a Special Projects reporter at WECT ended, she didn’t know where to turn.

“I think everyone has a reason to get out of bed in the morning,” she reflects. “And my stories were it for me. They were my whole world.”

Roman didn’t have a solution, but she made the tough decision to sell her recently renovated “Babe Cave,” a historic home she poured her heart into restoring and making her own. While she was having to let go of her cherished home and career, she got a phone call from a relative. Her grandmother had passed away.

“This was implausible to me because even though that woman was 92 years old, she drank like a pint of bourbon and bodysurfed every day,” Roman laughs. “You could not kill this woman!”

All the things she worried about before seemed unimportant now.

“I became super aware of the value of time,” Roman says. “I had just become no one’s granddaughter.”

Everyone around her was telling her to just go get a new job — any job. But that seemed like bad advice.

“I didn’t want any old job,” Roman says. “If I only have a limited amount of  time here, I don’t want to spend it just getting a paycheck. That seems like throwing away time.”

She began to ask herself the cliché question, “If money wasn’t an object, what would you do with your life?” She decided her greatest passion was throwing her camera in the car and driving around the backroads to find forgotten pieces of architecture. So she bought a van and worked on it for four months, transforming it into a mobile tiny home.

Roman had a vision of saying goodbye and taking off with the wind in her hair and a camera in hand, but it was February.

“I would wake up every morning warm in my bed with a toilet and a hot shower nearby and then I would look at this van in the driveway and be like ‘I’m going to go sleep in that with no utilities? I’m definitely crazy!’” she says.

Finally, a clear sunny day came. Roman told herself, “If I don’t go now, I’m never gonna go.” There were no goodbyes, no fanfare. She threw all her belongings in the back of the van and crossed the Cape Fear Bridge with the plan to head south for only three weeks.

“I woke up one morning and I had all these followers,” she  says. “Unbeknownst to me, van conversions were a thing!”

Hitting the trend at the right time, she gained about 27,000 subscribers and was able to monetize her channel.

On her first night on the road, Roman stopped in Georgetown, South Carolina. The town is generally very safe, but she prepared for the worst.

“On that night, I locked down that van like I had just parked in a war zone. I was so terrified that people were going to break in,” she says.

Her fears began to diminish as she headed down to Florida, where she hit her three-week mark. The now-confident Roman thought to herself, “Okay, I’ve hit three weeks, maybe I could just keep going.” She headed west, traveling along the Gulf Coast, getting stuck in the sand in a Louisiana bayou, and falling in love with Texas.

One night while camping deep in the woods of Texas, she received a text from the owners of the Wilmington house in which she had been keeping the last of her worldly possessions. They told her they were renting out the house and she needed to remove her belongings.

“From that point on, it changed the gravity of my little three-week trip,” she says. “The van was not just my little travel rig; it was now my home.”

Moving north to escape the intense summer heat, she traveled through Arkansas, Tennessee, Kentucky, Indiana and Ohio. She stopped to document the architectural history in each state along the way.

She hit the four-month mark in Buffalo, New York, with no more fear to hold her back.

“I would get out of the van in a Walmart parking lot, in my Tinker Bell pajamas, and go in and brush my teeth,” Roman says. “I just didn’t care anymore.”

She began to feel worn out after so many months alone in the van. A trip to Boldt Castle in upstate New York gave Roman a new perspective.

Millionaire George C. Boldt planned the castle as a tribute to his wife, Louise. Louise died before the castle was complete and an inconsolable George sent a message to the workers telling them to put down their tools immediately.

The castle fell into disrepair and was vacant for over 70 years.

She began to make her way back home. After returning to Wilmington, she reflected on the journey.

“There is no magic in the van,” she says. “You don’t get to skip the part where you are afraid. But, life has an incredible ability to fly by and when I am lying there one day, like my grandma was, I want to be able to bother all of the male nurses with all the stories of the crazy things I did.”

Roman continues to do crazy things. She upgraded vehicles, switching to a large fifth wheel she dubbed the “War Wagon,” and has been traveling in the RV for months.

She doesn’t know what the future holds, but she will continue to explore and document the beautiful architecture this world has to offer.