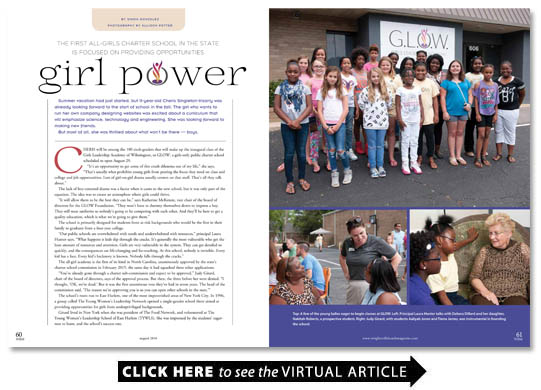 Summer vacation had just started but 11-year-old Cheris Singleton-Irizarry was already looking forward to the start of school in the fall. The girl who wants to run her own company designing websites was excited about a curriculum that will emphasize science technology and engineering. She was looking forward to making new friends.

But most of all she was thrilled about what won’t be there — boys.

Cheris will be among the 100 sixth-graders that will make up the inaugural class of the Girls Leadership Academy of Wilmington or GLOW a girls-only public charter school scheduled to open August 29.

“It’s an opportunity to get some of this crush dilemma out of my life ” she says. “That’s usually what prohibits young girls from putting the focus they need on class and college and job opportunities. Lots of girl-on-girl drama usually centers on that stuff. That’s all they talk about.”

The lack of boy-centered drama was a factor when it came to the new school but it was only part of the equation. The idea was to create an atmosphere where girls could thrive.

“It will allow them to be the best they can be ” says Katherine McKenzie vice chair of the board of directors for the GLOW Foundation. “They won’t have to dummy themselves down to impress a boy. They will wear uniforms so nobody’s going to be competing with each other. And they’ll be here to get a quality education which is what we’re going to give them.”

The school is primarily designed for students from at-risk backgrounds who would be the first in their family to graduate from a four-year college.

“Our public schools are overwhelmed with needs and underwhelmed with resources ” principal Laura Hunter says. “What happens is kids slip through the cracks. It’s generally the most vulnerable who get the least amount of resources and attention. Girls are very vulnerable in the system. They can get derailed so quickly and the consequences are life-changing and far-reaching. At this school nobody is invisible. Every kid has a face. Every kid’s backstory is known. Nobody falls through the cracks.”

The all-girl academy is the first of its kind in North Carolina unanimously approved by the state’s charter school commission in February 2015 the same day it had squashed three other applications.

“You’ve already gone through a charter sub-commission and expect to be approved ” Judy Girard chair of the board of directors says of the approval process. But then the three before her were denied. “I thought ‘OK we’re dead.’ But it was the first unanimous vote they’ve had in seven years. The head of the commission said ‘The reason we’re approving you is so you can open other schools in the state.'”

The school’s roots run to East Harlem one of the most impoverished areas of New York City. In 1996 a group called The Young Women’s Leadership Network opened a single-gender school there aimed at providing opportunities for girls from underprivileged backgrounds.

Girard lived in New York when she was president of The Food Network and volunteered at The Young Women’s Leadership School of East Harlem (TYWLS). She was impressed by the students’ eagerness to learn and the school’s success rate.

About a year and a half after she and her husband retired to Wrightsville Beach Girard attended a reception at the Kenan House the historic mansion on Market Street that serves as the residence of the University of North Carolina Wilmington chancellor. That’s where she met Georgia Miller wife of then-chancellor Gary Miller. As the two women chatted the conversation turned to Wilmington and the lack of opportunity for some of its children.

“She said ‘We live in this big mansion and right behind us is Snipes Academy and they barely have enough money for books ‘” Girard says. “I said ‘You should go see this school in New York.’ Ten days later we were on a plane.”

Girard and Miller were part of a group that included city and county government officials and school board members. They were inspired by what they saw and decided to not only emulate the TYWLS model but to become one of 17 affiliate schools in the network.

Miller was the driving force behind the effort. When her husband resigned as UNCW chancellor in 2014 and the couple relocated to Wisconsin there was a moment of crisis.

“Georgia was a force of nature ” Girard says. “When she left I thought it was dead. I didn’t have the power she did. The [GLOW] board voted to keep the effort going.”

Girard found herself as the chair somewhat reluctantly shouldering more of the work than she had originally signed up for.

“I’m not an education person I’m not a nonprofit person and I was retired ” she says.

It helped that the goals of the academy fit with her thoughts on philanthropy in general. The altruistic impulse the desire to help someone to touch a life to improve it is a wonderful thing. But the method matters.

Giving whether through treasure or time that only provides a short-term benefit might actually do more harm than good. Charity that creates dependency is trumped by sustainability that creates opportunity.

“There is a way to empower the people you are trying to help ” Girard says. “It’s about empowering girls and taking them from their economic situation and being quagmired to graduating from high school and college and becoming leaders.”

Hunter boldly states the academy’s goals for each student.

“She will graduate from high school ” Hunter says. “She will go to a competitive four-year university. She will graduate with a college degree and be the mistress of her own ship. That is why we are here. Failure is not an option.”

The girls are encouraged to dream big. A board at the school declares those dreams in the girls’ handwriting:

“Build a homeless shelter for the homeless people.”

“Sell my art and then donate to charity.”

“To be an engineer.”

“To become a scientist and a singer.”

“To become a marine scientist.”

“To explore new places and things.”

“To become a doctor.”

“As a charter school we can be nimbler and offer some specific and direct services ” he says. “We are able to serve kids who may not otherwise be successful in the traditional school that they’re in. We’re held to the same standards as the public schools but how we get there is totally up to us. We can be totally creative. We are building true 21st-century classrooms. There will not be a desk in a single classroom in this building. Everyone will be learning at tables they will be learning to problem-solve and think critically so they are being prepared for 21st-century careers.”

There will only be sixth-graders on campus when the school located behind St. Nicholas Greek Orthodox Church on South College Road opens its doors. Each successive year a new class will be added with the school reaching full enrollment and its first high school senior class graduating in 2023.

The school will employ a STEAM curriculum: science technology engineering art and math.

That’s one of the reasons why math teacher Erica Hodulik wanted to join the GLOW faculty. She has an engineering degree from Vanderbilt and has firsthand experience in how difficult it can be for girls to break into those fields.

“I was one of four girls in my major ” she says. “It can be a little intimidating. It’s great to be a part of encouraging girls not just to be leaders but in these fields where your classmates don’t see you until you’ve proven yourself.”

Hodulik went to Vanderbilt with every intention of being an engineer but her career plans changed when she took a leadership seminar that detailed the number of failing schools in the country.

“I was in shock ” she says. “What do you mean people don’t all have a good education? What do you mean you can graduate and you can’t read higher than a fifth-grade level? That doesn’t make any sense. It was really shocking to hear.”

She decided to become a difference-maker. She got involved with Teach for America an organization that places teachers in schools in low-income areas. She was sent to New Jersey and after fulfilling her two-year commitment she stayed for another three.

“I loved working with the students ” she says. “If you are working in a failing school you realize kids are kids. Every kid can do really well. They just need the chance.”

After taking a year off to work on writing curriculum she was ready for a new challenge. She heard about the new school in Wilmington and knew it’s what she wanted to do.

“When I heard about GLOW it sounded like what brought me to education in the first place ” she says. “It was a no-brainer. This is where my passion lies.”

Other members of the inaugural faculty have similar motivations. English teacher Canesha Jacobs is passionate about helping girls who come from backgrounds like hers.

“I grew up with a single teenaged mother ” she says. “Statistically I should not have been successful. I should not have graduated from high school I shouldn’t have gone to college all of those things that statistics say. Becoming a teacher it was my goal to be that person who says ?You can do it you can beat it.’ Knowing that GLOW is looking for those girls that’s where I wanted to be.”

Jacobs is a Wilmington native who went to middle school and junior high in Leland then came back across the bridge to attend New Hanover High School. She remembers the teachers who made a difference in her life.

“I had a mom who was fantastic and who wanted me to be successful but even that wasn’t enough ” she says. “I also had teachers who pushed me who didn’t just limit me to a certain little bubble because this is where I came from but encouraged me to run with what I was learning and do more which in turn made me want to do that same thing. I really wanted to have the opportunity not just to go out and tackle the world myself but to create this army of all of these people to go out and tackle the world.”

She is looking forward to teaching in the all-girls atmosphere.

“I think a lot of the time in co-ed schools girls tend to take a back seat and don’t always feel confident enough to step up ” she says. “And if they do it isn’t always received well. I think in an all-girls school they really get the chance to realize  ‘I am a leader I can step up.’ It is going to be celebrated.”

There are many tales of tension between charter and public schools but GLOW officials say that is not the case here. New Hanover County Board of Education members have been involved from the start.

“We are blessed to have a great relationship and friends at the city and the county and have had truly a fantastic partnership with New Hanover County Schools ” Godbey says. “You hear about school systems and charter schools not working well together. I can tell you thus far that has not been our experience. New Hanover County Schools have been wonderful to work with literally at every level and in every office and we consider ourselves a partner in education in this community.”

Although GLOW won’t officially open its doors until late August school officials began identifying and working with some of the students over the past few years. The girls have participated in designing the school uniforms and enrolled in summer leadership academies at UNCW.

“We’ve been working with a lot of the girls since third grade ” Girard says. “The girls are absolutely amazing. There is nothing to keep them from what they want to do in life as long as the support system is in place.”