Out to Sea Contemporary 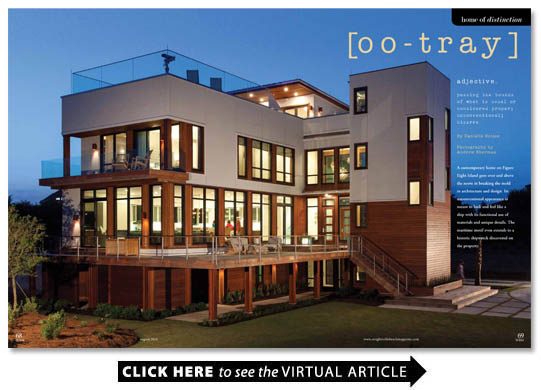 [oo-tray] adjective. Passing the bounds of what is usual or considered proper; unconventional; bizarre.

A contemporary home on Figure Eight Island goes over and above the norm in breaking the mold in architecture and design. Its unconventional appearance is meant to look and feel like a ship with its functional use of materials and unique details. The maritime motif even extends to a historic shipwreck discovered on the property.

The Spencers were visiting the lot where they would build their new home on Figure Eight Island when a neighbor approached them.

“You know there’s a shipwreck on that lot and I haven’t seen it in 20 years ” the neighbor told them.

The homeowners rustled through the brush curious and eager to uncover an unexpected piece of history. Together they poked around until they started uncovering the remains of a ship in the dirt.

Curious about the history of the ship the Spencers and builder Mark Batson of Tongue & Groove sought information from the Office of State Archaeology in Raleigh.

“We wanted to identify the boat as its own entity and honor those fallen on board ” Batson says. “Shipwrecks aren’t normally found on private property but this is a North Carolina underwater archaeology piece.”

Archaeologist and conservator Nathan Henry came out to Figure Eight Island. After investigating the historic discovery he determined the wreckage was part of the John S. Lee a lumber schooner bound from Wilmington to Venezuela in 1877. The ship ran into a great storm shortly after leaving port and sank. The vessel captain and passengers were all reported lost at sea.

“We bought a lot found a ship and built a ship ” Mr. Spencer says.

The “ship” they built is their contemporary house which they affectionately named Oo-tray. The name is derived from the French outr?gger which Mrs. Spencer says can be defined as over and above the norm.

Two years ago the homeowners named their new puppy Oo-tray or Tray for short. He is a Great Pyrenees a breed whose large size is well beyond the normal.

“We decided to also name the house Oo-tray. I thought it was fitting because the house is not normal ” says Mr. Spencer. “I wanted it to feel like a ship. I wanted everything to be built-in and the kitchen to have the galley feel with appliances tucked around the corner. I also wanted the guest bedrooms to be equal to the master with the views seen from each balcony.”

After seeing a conceptual drawing of a contemporary house in the back of a Caribbean magazine the homeowners went online and found preliminary drawings that included a pool on top of the house.

The homeowners hired Batson and architect Michael Kersting with Kersting Architecture to achieve the modern aesthetic and innovative design.

The first step was to align the house on the spacious lot that sits below street level.

“The lot was a little bigger so we were able to position the house in the best possible way to include the views sun and wind ” Batson says. “We designed the house where the winter sun would still hit the porches and cabana and the winter winds would blast the back of the home saving the summer wind to blow across all the decks. It is called passive solar — it allows for sun and blocks all the wind.”

The exterior includes mahogany wood concrete board and glass. This allows for low maintenance where the exterior can be cleaned with a boat brush and hose.

“We wanted to find a way for longevity ” Mr. Spencer says. “One hundred years from now when they go to tear the house down they are going to figure out they can’t.”

“It’s a fixed ship ” Mr. Spencer says. We light it up at night and it looks like a ship at sea.”

The interior of the home is minimalistic and consistent with the exterior. Sapele mahogany trim frames all the windows while white walls wormy maple floors and glass railings are used throughout. Organic nesting pendants hang above the entry and a blue quartz wall feature greets guests as they turn towards the open living spaces.

“I loved the idea of having a calm and simple look inside ? and the focus would be what is outside the windows ” Mrs. Spencer says. “When you are in here the beauty should be outside.”

hile the main living areas are open and clean the homeowners worked with interior designer Bridgett Mazer to achieve an upscale boutique hotel look and feel in the bedrooms and bathrooms. A bold and colorful wallcovering can be found in the powder room bath while the master bathroom has floor-to-ceiling wall tile and exotic Brazilian countertops.

“She wanted a creative element in every room that was striking. She is consistent and minimalistic with a cozy coastal and uncluttered look ” Mazer says.

Each guest bedroom is simple but includes a focal wall and built-in closets a Scandinavian influence. The master bedroom has a textured (wipe clean vinyl) wallcovering that shimmers under the oyster shell chandelier. Motorized ripple fold drapery hangs wall-to-wall hiding the expansive view at night and adding to the hotel ambiance.

The third floor is a favorite offering 360-degree views from a pool that has a firepit on one side and faces a seating area created from the stern of a boat. The bow of the boat once a U.S. Navy hull built in 1971 is used as a bar inside the rooftop pool house separated from the outdoor area by folding glass doors.

The boat lends a personal story to Oo-tray.

“My 31-year-old brother Caleb was a commercial fisherman and died offshore spear-fishing ” Batson says. “He had several boats and he bought this one a few years ago and it was just a hull. When we were designing the home the tragedy had happened. The size of the stern and the bar perfectly matched what we had planned for. We had already planned to use the stern for a seating area.”

The Spencers hung a remembrance plaque for Caleb on the front part of the boat.

“It is important to celebrate when a family member passes and you want to constantly remember them. This was a meaningful home for us. This was a piece of his life ” Batson says.

A crane was used to lift the boat on top of the home and then it was cut in half to perfectly accommodate the design the homeowners envisioned. Holly and teak inlay floors porthole windows doors that resemble boat hatches and an all stainless-steel bathroom with marine head and sink truly make the top floor look and feel like a boat. There are also mounted binoculars from a Russian ship and a replica engine-order telegraph.

The homeowners wanted to enjoy all the sights and entertain guests in the pool. A two-inch-thick clear acrylic panel holds the water in the stainless-steel pool.

“I hope for this to be our happy place ” Mrs. Spencer says.

RESOURCES Creating this Home of Distinction