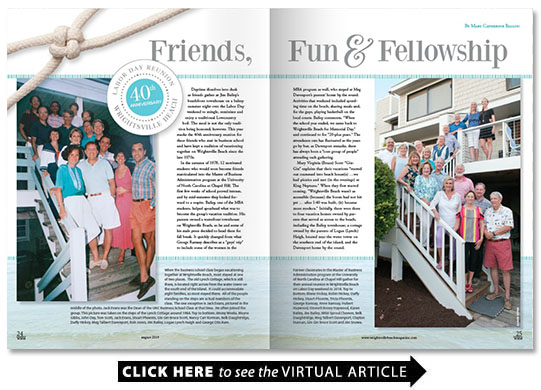 Daytime dissolves into dusk as friends gather at Jim Bailey’s beachfront townhouse on a balmy summer night over the Labor Day weekend to mingle reminisce and enjoy a traditional Lowcountry boil. The meal is not the only tradition being honored however. This year marks the 40th anniversary reunion for these friends who met in business school and have kept a tradition of vacationing together on Wrightsville Beach since the late 1970s.

In the autumn of 1978 12 motivated students who would soon become friends matriculated into the Master of Business Administration program at the University of North Carolina at Chapel Hill. The first few weeks of school proved intense and by mid-semester they looked forward to a respite. Bailey one of the MBA students helped spearhead what was to become the group’s vacation tradition. His parents owned a waterfront townhouse on Wrightsville Beach so he and some of his male peers decided to head there for fall break. It quickly changed from what George Ramsay describes as a “guys’ trip” to include some of the women in the MBA program as well who stayed at Meg Davenport’s parents’ home by the sound. Activities that weekend included spending time on the beach sharing meals and for the guys playing basketball on the local courts. Bailey comments “When the school year ended we came back to Wrightsville Beach for Memorial Day ” and continued to for “20-plus years.” The attendance rate has fluctuated as the years go by but as Davenport remarks there has always been a “core group of people” attending each gathering.

Mary Virginia (Bruce) Scott “Gin-Gin” explains that their vacations “started out crammed into beach house(s) …we had picnics and met (in the evenings) at King Neptune.” When they first started coming “Wrightsville Beach wasn’t as accessible (because) the boom had not hit yet … after I-40 was built (it) became more modern.” Initially there were three to four vacation homes owned by parents that served as access to the beach including the Bailey townhouse; a cottage owned by the parents of Logan (Lynch) Haigh located near the water tower on the southern end of the island; and the Davenport home by the sound.

Over the years more vacation homes were added to the mix. Gin-Gin clarifies “Different classmates and spouses stayed among the vacation homes of Tricia and Stuart Phoenix Karen and Jim Bailey Emmett (Boney) and Hubert Haywood and the Wilmington home of Meg Davenport.” There came a short lull in the gatherings with the birth of children but they renewed their tradition with a 30-year reunion. For the past two years the group has been coming over the Labor Day holiday.

While the opportunity to vacation together at Wrightsville Beach began as a panacea for the pressures of school it also served as a way for group members to develop enduring friendships with one another adding a meaningful dimension to their lives. Bailey declares that with “the intensity of the experience in school … we basically only spent time with each other ” consequently becoming lifelong friends. The MBA group continues to stay close. There are “lots of ways we keep up outside of Wrightsville Beach … ski trips weddings (and) children’s weddings.” Wilmington native Davenport adds “The ones from out-of-town have really kept the tradition up ” with the Wrightsville Beach gatherings serving as their annual trip to the coast.

The yearly gathering now extends beyond the initial group. Gin-Gin remarks how the annual trip “started out when we were all single ” and as families developed the numbers grew. The Lynch Cottage “became the place for people with kids ” because it could accommodate about 32 people with four bedrooms on both floors. “Many of us stayed (there) over the years especially as we married and started growing families.” She observes how their “kids grew up together ” and changes in conversation topics reflect that throughout the years. “The most important part (now) is people asking about how your kids are doing … we’ve been to weddings graduations and some kids are starting graduate school.” Duffy and Robin Hickey’s children Robert and Blais attended this year’s gathering and Blais herself just began business school. Gin-Gin describes the annual gathering as a “microcosm that keeps repeating itself ” having established a tradition that comes full circle with each new generation.

When asked how the MBA program shaped them the answers vary but still point to a common theme — the importance of friendship and working together. There is certainly no shortage for success and drive in the group either. Davenport says the program taught her “how to put together a business plan and take it to a financial institution to get (funding).” As a student at UNC Chapel Hill she constructed a plan for an elective course choosing to create a “frog-farming” business. Known as “The Frog Lady ” her skills and creativity did not go unnoticed — her professor has since used her strategy and creativity in his own classes. Mitzi Cheever moved to New York City after graduating from the MBA program to work for Chemical Bank and then lived in London for several years to continue working in the banking industry. Stuart Phoenix reflects on how the MBA program taught him to “try to understand people better ” referencing an international comparative management course taught by professor Jack Behrman in which he learned about the myriad business perspectives of different countries.

“Instead of living in silence we learned to work together … if one succeeds then everybody succeeds ” states Clayton Duncan who served as the MBA ’80 class president. He confirms “Working together — that’s what distinguishes this class.” Gin-Gin elaborates “We had so many mentoring faculty” that helped and supported the class throughout the program. Ramsay recalls how even the dean of the Business School Jack Evans and his wife Pat came to Wrightsville Beach for a couple of the gatherings over the years to visit with his students and play basketball. This intimate relationship between the students and faculty highlights the close connection maintained among the group.

Duffy Hickey agrees that for him the most impressionable part of the MBA program was the friends he made. “That’s why coming here is important.” Ultimately the stress and workload of school made the vacations that much more rewarding. Hickey muses “Anything you want to do (in life) involves growing stretching and challenging yourself. You have to stretch be uncomfortable and challenge yourself some more and that’s how we get better.” The MBA program at UNC Chapel Hill coupled with their annual beach tradition provided a unique opportunity for this group of men and women to not only succeed as individuals but to form lasting friendships.

As the sun sinks below the horizon Ramsay takes time to reflect noting how their inaugural trip made them “realize we could do this after the stress of school.” Describing the experience as “cathartic ” he reinforces the fellowship this group enjoys confirming that Wrightsville Beach possesses “a sense of home to us … (which) no one ever articulated…it just became that.”