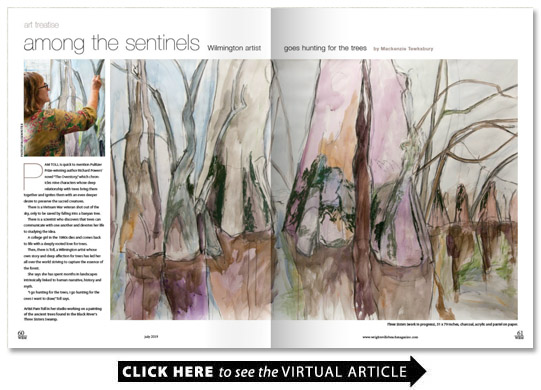 Pam Toll is quick to mention Pulitzer Prize-winning author Richard Powers’ novel “The Overstory ” which chronicles nine characters whose deep relationship with trees bring them together and ignites them with an even deeper desire to preserve the sacred creatures.

There is a Vietnam War veteran shot out of the sky only to be saved by falling into a banyan tree.

There is a scientist who discovers that trees can communicate with one another and devotes her life to studying the idea.

A college girl in the 1980s dies and comes back to life with a deeply rooted love for trees.

Then there is Toll a Wilmington artist whose own story and deep affection for trees has led her all over the world striving to capture the essence of the forest.

She says she has spent months in landscapes intrinsically linked to human narrative history and myth.

the spiraling oaks on a ridge above the Black Isle. It was in Scotland that she created Braided Tree.

Toll a native of Stillwater Oklahoma has been drawing since childhood saying she has always had a thing for trees.

“There was a whole forest behind us. Acres and acres of woods mostly pines with some hardwoods. When you went really deep in there there was a magnolia tree. As a kid it was like stepping into another world ” Toll says.

The lifelong artist’s voice warms when she speaks of the tarp her father bought to make a tent out in the woods in front of their house. She was allowed to go only so deep into the woods — but she always pushed the boundaries striving to see and experience more.

It’s a love that has stood the test of time as Toll still spends time exploring the woods with her dog.

She mentions the book by Powers and singles out her favorite part: when two characters protest atop a tree until they are on the last standing one in the forest.

Her affinity for trees and nature has obviously influenced her artworks and they often provide a narrative.

“When I am making art I am putting my energy into it. It is physical. Then someone comes along and looks at it and I hope it strikes a chord ” says Toll.

She normally creates sketches when she’s out in nature and then comes back to her studio to respond to her experience.

“In my studio practice drawing is not distinctly separate from painting. But this body of work — a slice out of 10 years pursuing an energy around trees comes from a lifetime spent among them — is primarily about drawing ” she says. While she says she often paints in oils on canvas her trees are mostly pastels drawn over acrylic washes on paper.

At some point my journey as an artist brought me home; to the primordial woods of Bald Head island — one third of the island is a natural reserve — and to the diminishing wetlands behind my house in Wilmington ” says Toll.

Her works Summer and Untitled are both of the maritime forest on Bald Head Island.

Toll visited the 2 800-year old cypress trees on the Black River in June.

“I have taken so many pictures of trees that I want to draw including the trees that were destroyed by Hurricane Florence ” she says.

Since the hurricane and the shift in landscape she finds herself missing particular trees. “Like the Siamese twin trees that bordered Bellevue Cemetery interlocked like vines just outside the fence. I wanted to draw those trees and now they are gone. Everywhere I look I see the ghosts of trees. I feel compelled to make these drawings which I hope resonate as portraits of living energy ” says Toll.

Toll attended the University of North Carolina at Chapel Hill and obtained a degree in art and English literature as books often spark the same passion for her as art does. She moved to Wilmington in 1991 where she and four other artists joined forces to create Acme Art Studios a Wilmington collaborative art space that is now home to 22 artists. She also is an associate professor of art at the University of North Carolina Wilmington. Her involvement in Paint The Future a program that partners international artists with impoverished children has also taken her to Brazil South Africa France and the Pine Ridge Reservation in South Dakota.

Pat Bradford contributed to this story.