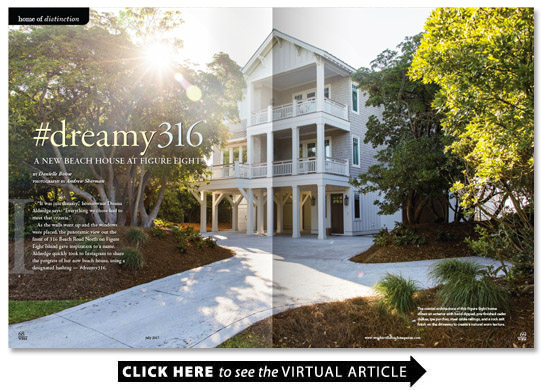 “It was just dreamy ” homeowner Donna Aldredge says. “Everything we chose had to meet that criteria.”

As the walls went up and the windows were placed the panoramic view out the front of 316 Beach Road North on Figure Eight Island gave inspiration to a name. Aldredge quickly took to Instagram to share the progress of her new beach house using a designated hashtag — #dreamy316.

“It is so dreamy. That is what we said about the house even early on ” says interior designer Amy Tyndall.

Tyndall commissioned a realistic rendering of the open living spaces to show Donna and her husband Christopher a true visual representation of that dreamy interior they would soon be sharing with their three young children. Donna gifted the rendering to Christopher on Christmas Day as a teaser of what was coming.

Christopher wouldn’t understand just how real this drawing was until the home was completed and he walked up the stairs to stand at the same angle from which the perspective was drawn.

“I went right to the spot where the perspective was rendered and could not believe how precise the vision Donna and Amy had and there was amazement from that precision ” Christopher says. “This is a dream come true.”

From the site with a view to the vision and building the cottage is a collaboration between the Aldredges architect John Stirewalt Sterling Custom Construction and Amy Tyndall Design.

“Believe it or not I had worked with Henry Johnston in the early 1980s and drew the original house that was on the lot ” Stirewalt says. “That house was torn down but we kept a lot of features in the new design. We worked on a plan that fit the site and the only thing that changed was the location of the driveway. We keep 95 percent of the existing vegetation. I am a tree-hugger; it is my nature. I try to keep all that I can.”

The Aldredge family found Figure Eight Island three years ago and fell in love. At the same time their beach house in Beaufort North Carolina had quickly become too small with three growing children. It was time for #dreamy316.

The family purchased the lot in 2014 and construction began January 3 2016. Donna and Christopher were thinking long-term building #dreamy316 as their future retirement home but in the meantime it would be a special getaway from their full-time residence in Buies Creek. Summers and long weekends with the family’s two dogs Jasper and Maizey would now be spent at Figure Eight.

“Our goal was to have a setting where our young children could have some freedom in a secure environment — biking or skateboarding and going out on the beach ” Christopher says.

The children Beecher (9) Charlotte (7) and Claire (3) have renewed bonding opportunities in the cottage.

“The kids change at the end of the school year. They start getting along because they realize they only have each other for friendship in the summer ” Donna says.

When choosing an atmosphere for the dreamy interior Tyndall made dozens of digital storyboards for Donna and Christopher to review including colors materials finishes and furnishings.

“Everything was seamless ” Tyndall says. “We found inspirational photos online and everything we chose we stuck to it from the beginning. We created a color palette and established the vibe we wanted through the colors. With all of that information there were no surprises.”

Jeremy Bishop of Sterling Construction was tasked with making the dream a reality.

“The living room sets the stage for the whole house and it allows the family to be together ” he says. “They brought coastal Beaufort charm to Figure Eight.”

In the contrasting-color kitchen a concrete countertop fuses with reclaimed walnut from an RJ Reynolds teardown in Winston-Salem to form an eat-in L-shaped dining peninsula. The reclaimed wood which Donna fell in love with is also featured atop the home’s bookshelves on two levels emphasizing cohesive design throughout. Beecher Charlotte and Claire search for their handpicked family collection of oyster shells embedded in the concrete countertops.

“I drove the shells down when they were mixing the concrete ” Donna says. “We found a lot of the shells last year after Hurricane Matthew.”

The Aldredges collected the shells on family vacations to the Bahamas and Aruba in addition to Beaufort and Figure Eight Island.

“The house has a great material palette that reflects Donna’s personality — easy and relaxed. It is a good throwback to where they came from in the country like when the wood added warmth to the concrete ” Bishop says.

Functional and kid-friendly finishes were important for the young family. Wood-look tile floors were used throughout the house with radiant heat in the kitchen and master suite. Minimal area rugs were used while Sunbrella and Crypton upholstery fabrics keep the beach house family-oriented and practical.

“It has an intimate feel for a beach house ” Bishop says. “The shiplap evolved from just being on one wall in the kids’ den to wrapping the circulation spaces because it felt right and carried the theme of the house.”

A sense of togetherness is enforced through an open family living area on the top floor and the kids’ den on the floor below. The spaces are laid back allowing the Aldredge children to eat live and play together.

“The kids have learned to play with each other. They don’t rely on sensory stimuli. I wanted the ground floor to enforce that sense of togetherness ” Donna says.

“Everything can be put away in a few minutes. Everything is kid-proof and in our eyes bulletproof ” Tyndall says. “Their mess can be cleaned up in a matter of seconds and the space instantly looks beautiful.”

The children’s memories started with holidays and weekend getaways.

“We camped on the beach this past weekend ” Christopher said in May. “The kids enjoyed telling ghost stories by the fire.”

The family is now spending their first summer on the island. When driving up Beach Road North #dreamy316 sits oceanside behind a little rise of lush landscape cozy and tucked away. The panoramic views of the natural dunes and glistening sand and the rhythm of the ocean waves are seen and heard from every room.

“For me this home is an opportunity to build a lot of memories with our young family ” Christopher says. “It is a place that years from now our children will be able to return to and reflect on family memories and traditions.”