Eat Them to Beat Them 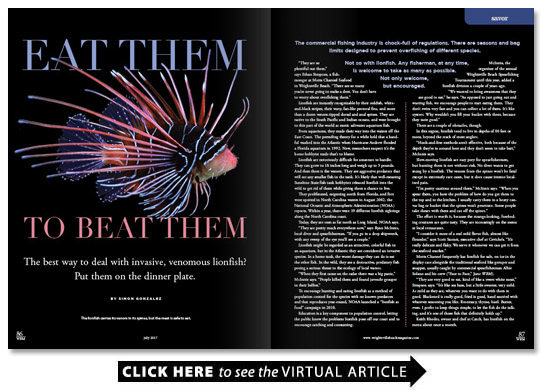 The commercial fishing industry is chock-full of regulations. There are seasons and bag limits designed to prevent overfishing of different species.

Not so with lionfish. Any fisherman at any time is welcome to take as many as possible. Not only welcome but encouraged.

“They are so plentiful out there ” says Ethan Simpson a fishmonger at Motts Channel Seafood in Wrightsville Beach. “There are so many you’re never going to make a dent. You don’t have to worry about overfishing them.”

From aquariums they made their way into the waters off the East Coast. The prevailing theory for a while held that a handful washed into the Atlantic when Hurricane Andrew flooded a Florida aquarium in 1992. Now researchers suspect it’s the home hobbyist trade that’s to blame.

Lionfish are notoriously difficult for amateurs to handle. They can grow to 18 inches long and weigh up to 3 pounds. And then there is the venom. They are aggressive predators that will eat any smaller fish in the tank. It’s likely that well-meaning Sunshine State fish tank hobbyists released lionfish into the wild to get rid of them while giving them a chance to live.

They proliferated migrating north from Florida and first were spotted in North Carolina waters in August 2002 the National Oceanic and Atmospheric Administration (NOAA) reports. Within a year there were 19 different lionfish sightings along the North Carolina coast.

Today they are seen as far north as Long Island NOAA says.

“They are pretty much everywhere now ” says Ryan McInnis local diver and spearfisherman. “If you go in a deep shipwreck with any sweep of the eye you’ll see a couple.”

Lionfish might be regarded as an attractive colorful fish in an aquarium but in the Atlantic they are considered an invasive species. In a home tank the worst damage they can do is eat the other fish. In the wild they are a destructive predatory fish posing a serious threat to the ecology of local waters.

“When they first came on the radar there was a big panic ” McInnis says. “People killed them and found juvenile grouper in their bellies.”

To encourage hunting and eating lionfish as a method of population control for the species with no known predators and that reproduces year-round NOAA launched a “lionfish as food” campaign in 2010.

Education is a key component to population control letting the public know the problems lionfish pose off our coast and to encourage catching and consuming.

McInnis the organizer of the annual Wrightsville Beach Spearfishing Tournament until this year added a lionfish division a couple of years ago.

“We wanted to bring awareness that they are good to eat ” he says. “As opposed to just going out and wasting fish we encourage people to start eating them. They don’t swim very fast and you can collect a lot of them. It’s like oysters. Why wouldn’t you fill your bucket with them because they taste good.”

There are a couple of obstacles though.

In this region lionfish tend to live in depths of 80 feet or more beyond the reach of most anglers.

“Hook-and-line methods aren’t effective both because of the depth they’re in around here and they don’t seem to take bait ” McInnis says.

Slow-moving lionfish are easy prey for spearfishermen but hunting them is not without risk. No diver wants to get stung by a lionfish. The venom from the spines won’t be fatal except in extremely rare cases but it does cause intense localized pain.

“I’m pretty cautious around them ” McInnis says. “When you spear them you have the problem of how do you get them to the top and to the kitchen. I usually carry them in a heavy canvas bag or bucket that the spines won’t penetrate. Some people take shears with them and cut off the spines.”

The effort is worth it because the strange-looking foreboding creatures are quite tasty. They are increasingly on the menu at local restaurants.

“I consider it more of a real mild flavor fish almost like flounder ” says Scott Surratt executive chef at Ceviche’s. “It’s really delicate and flaky. We serve it whenever we can get it from the seafood market.”

Motts Channel frequently has lionfish for sale on ice in the display case alongside the traditional seafood like grouper and snapper usually caught by commercial spearfisherman Albie Solano and his crew (“Face to Face ” June WBM).

“They are very good to eat kind of like a sweet white meat ” Simpson says. “It’s like sea bass but a little sweeter very mild. As mild as they are whatever you want to do with them is good. Blackened is really good fried is good hand saut?ed with whatever seasoning you like. Rosemary thyme basil. Butter even. I prefer to keep things simple to let the fish do the talking and it’s one of those fish that definitely holds up.”

Keith Rhodes owner and chef at Catch has lionfish on the menu about once a month.

“Not so much grilling because the fillets are thin. But saut?ing baking broiling frying. It’s not oily like a mackerel or bony like other bottom-dwellers or anything like that. It’s a delicious fish. We sell out of it all the time we have it.”

So does Brent Williams owner and chef at Brent’s Bistro.

“Most people are curious to try it ” he says. “Then they are blown away. It’s an easy sell once people find out how good it is. They’re an ugly fish but they are delicious.”

When lionfish is on the menu everyone benefits. Commercial fishermen can take as many as they want without the fear of overfishing. Seafood consumers can enjoy a delicious meal that benefits the local marine ecology.

“Just the fact that we’re seeing them now locally and can get them is incredible ” Williams says. “We’re catching them right off our coast. If it’s on the plate it’s good for the environment. It’s a win-win.”

For commercial spearfishermen lionfish tend to be seasonal. There are no restrictions at any time of the year but it makes more economic sense during the warm summer months to hunt larger fish like grouper that fetch a greater price while they are in season. That leads to a lack of availability at restaurants and fish houses.

“It’s so unpredictable when the divers go out for them ” Surratt says. “I call Motts every morning and if they have lionfish I’ll ask for it. It’s probably about two three times a month I can get it.”

Even when lionfish are available they aren’t always in high demand. For one thing there’s the exotic appearance. Lionfish don’t look like anything else on display at Motts.

Then there’s the perception that they might be poisonous. That’s what McInnis thought the first time he was offered a lionfish.

“I’ve had some customers joke ‘If my lips turn blue call an ambulance ”’ he says.

Proponents of eating lionfish point out that they are perfectly safe to eat.

“The poison is located in the spines ” Simpson says. “A couple of hours after they die it’s harmless. It’s still quite a serious needle but the toxin is harmless. And it’s not in the meat at all.”

For now the bulk of the catch is brought in by spearfishermen. An ecology group in Pensacola Florida — the self-proclaimed lionfish capital of the world because of the amount of them teeming in the warm waters off the Florida panhandle — is experimenting with traps that could remove them in bulk without harming other species.

As word gets out and they become more popular as seafood there could be a greater effort to catch and to eat them.

“I tend to think as awareness grows folks will search for lionfish when they go out ” Rhodes says. “We can’t eat flounder all the time. There’s a wave and passion now for sustainable seafood. We have to look at our local aquatic system and how we can ensure there’s future fish out there for people to enjoy.”

Juice and zest limes. Place ingredients in blender and puree.

Season fish with salt and pepper on both sides and then dust with flour. In a saucepan heat olive oil on medium-high heat and saut? fish presentation side down until golden-brown then flip and add shallot and garlic. Deglaze with white wine and reduce (add stock if necessary to finish cooking fish). Plate the fish atop the hash and avocado puree. Remove the pan from heat and add butter to create a sauce to top the fish. Makes 4 servings.

Place the coated lionfish into the prepared dish. Spread the pineapple mixture over the coated filets. Bake until the fish flakes easily with a fork about 40 minutes.

Preheat grill to medium-medium high. Visually inspect the fish fillets to ensure there are no bones pat dry with clean paper towel. Rub each fillet with a little olive oil and season with salt and pepper. Place fillets skin side up on well-oiled grill and allow to cook for three to four minutes. Using a fish spatula carefully flip each fillet and cook for another three minutes. The fish will easily flake when done and internal temperature should be 145 degrees F.

In a medium saucepot add liquid salt and bring to a boil. Stir in the rice. Cover and turn heat to low. Allow the rice to simmer for 15 minutes or until all the liquid is absorbed. If rice is still too firm after the cooking time add a tablespoon or two of water and cover off the heat until the water is absorbed.

Zest and juice from 1 lemon

Place all ingredients except olive oil into blender and run on medium speed for one minute. Slowly add olive oil to mixture to emulsify. Season with salt and black pepper to taste.

Turn grill on medium-medium high and allow to preheat. Using a knife or mandolin slice the squash and zucchini on a bias or diagonal. Add to a mixing bowl and toss with the olive oil salt and pepper. Grill on one side for 3 minutes then flip and allow to cook for an additional 2-3 minutes or until the vegetable is pliable.

Begin to assemble the dish by placing a tablespoon of the vinaigrette on a plate then smear with the backside of the spoon. Place a mound of the coconut rice inside the arc of the vinaigrette smear. On a clean cutting board shingle the squash and zucchini in a alternating pattern and roll tightly to make into a flower. Place on top of the rice mound. Place the pieces of the fish around the rice mound allowing them to rest in the vinaigrette.