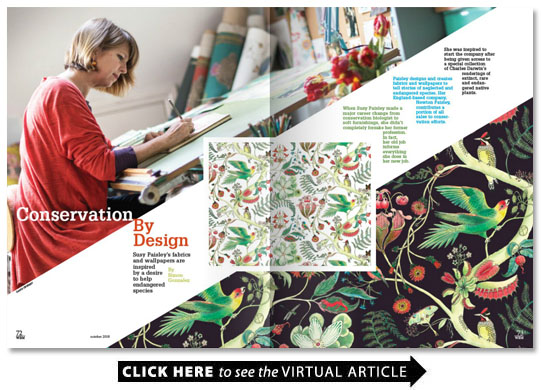 When Susy Paisley made a major career change from conservation biologist to soft furnishings she didn’t completely forsake her former profession. In fact her old job informs everything she does in her new job.

Paisley designs and creates fabrics and wallpapers to tell stories of neglected and endangered species. Her England-based company Newton Paisley contributes a portion of all sales to conservation efforts.

She was inspired to start the company after being given access to a special collection of Charles Darwin’s renderings of extinct rare and endangered native plants.

Paisley hand-drawn works include a collection called the Carolina Tree of Life which features extinct or endangered species including the Carolina parakeet the Venus flytrap and the migratory monarch butterfly.

Her efforts to draw attention to the flora and fauna of North Carolina is inspired in part by her ties to the coast. She has family in the Wilmington area.

The collection will be on display at An Evening with Susy Paisley a show hosted by Big Sky Design Oct. 24 at the Cameron Art Museum. Proceeds will benefit the North Carolina Coastal Land Trust.