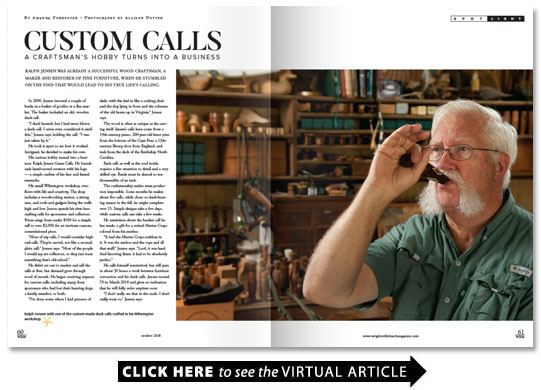 Ralph Jensen was already a successful wood craftsman a maker and restorer of fine furniture when he stumbled on the find that would lead to his true life’s calling.

In 2000 Jensen invested a couple of bucks in a basket of goodies at a flea market. The basket included an old wooden duck call.

“I duck hunted but I had never blown a duck call. I never even considered it until this ” Jensen says holding the call. “I was just taken by it.”

He took it apart to see how it worked. Intrigued he decided to make his own.

His curious hobby turned into a business: Ralph Jensen Game Calls. He brands each hand-carved creation with his logo — a simple outline of his face and famed mustache.

His small Wilmington workshop overflows with life and creativity. The shop includes a woodworking station a sitting area and tools and gadgets lining the walls high and low. Jensen spends his time here crafting calls for sportsmen and collectors. Prices range from under $100 for a simple call to over $2 000 for an intricate custom commissioned piece.

“Most of my calls I would consider high-end calls. They’re carved not like a normal plain call ” Jensen says. “Most of the people I would say are collectors or they just want something that’s old-school.”

He didn’t set out to market and sell the calls at first but demand grew through word of mouth. He began receiving requests for custom calls including many from sportsmen who had lost their hunting dogs a family member or both.

“I’ve done some where I had pictures of dads with the dad in like a rocking chair and the dog lying in front and the columns of the old home up in Virginia ” Jensen says.

The wood is often as unique as the carving itself. Jensen’s calls have come from a 19th-century piano 200-year-old heart pine from the bottom of the Cape Fear a 13th-century library door from England and teak from the deck of the Battleship North Carolina.

Each call as well as the reed inside requires a fine attention to detail and a very skilled eye. Reeds must be shaved to ten-thousandths of an inch.

The craftsmanship makes mass production impossible. Some months he makes about five calls while closer to duck-hunting season in the fall he might complete over 15. Simple designs take a few days while custom calls can take a few weeks.

He reminisces about the hardest call he has made: a gift for a retired Marine Corps colonel from his mother.

“It had the Marine Corps emblem in it. It was the anchor and the rope and all that stuff ” Jensen says. “Lord it was hard. And knowing them it had to be absolutely perfect.”

He calls himself semiretired but still puts in about 30 hours a week between furniture restoration and his duck calls. Jensen turned 70 in March 2018 and gives no indication that he will fully retire anytime soon.