Replicas of the Charters of Freedom, the documents that inspired America’s creation, are on permanent display in Brunswick County 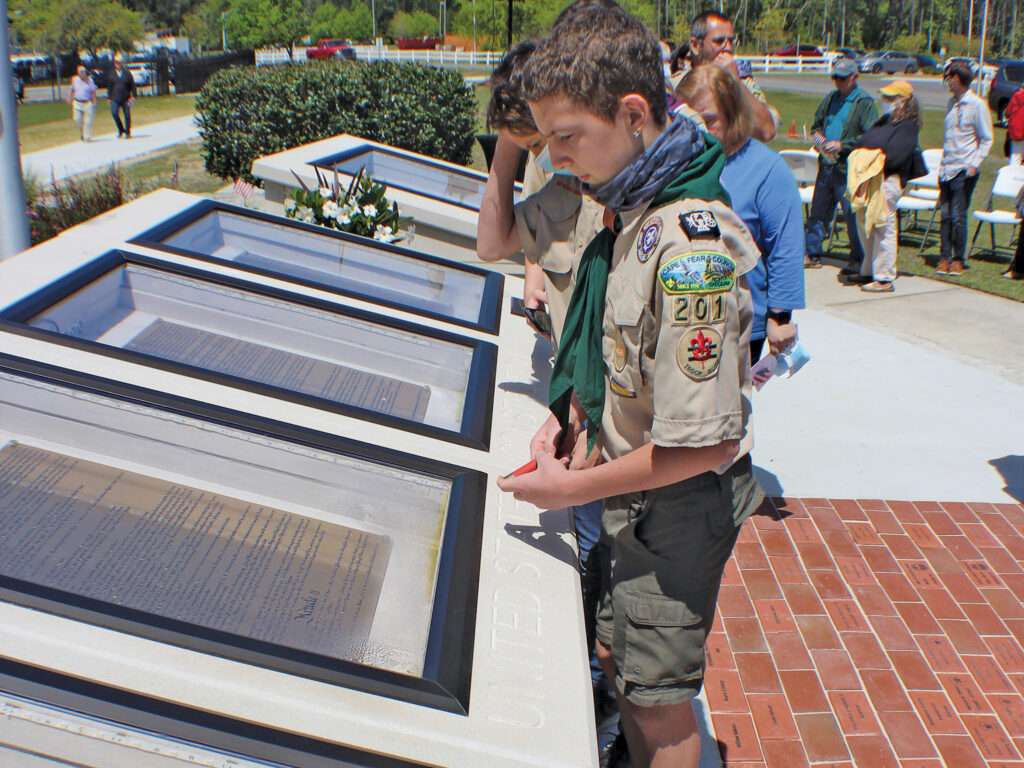 Foundation Forward dedicated replicas of the Charters of Freedom in a public ceremony in April. The permanent display, located in front of the Brunswick County Courthouse in Bolivia, is the organization’s 34th setting. Photo courtesy of Foundation Forward

On July 2, 1776, representatives from the 13 American colonies declared their intent to form a free and independent country. No longer would they be subject to the tyranny of King George III, the reigning monarch of Great Britain. They would form a new nation, the United States of America.

The intentions were codified in the Declaration of Independence, drafted and presented to the Continental Congress by the Committee of Five: Thomas Jefferson, John Adams, Benjamin Franklin, Roger Sherman, and Robert Livingston. The document, approved on July 4, is one of the most persuasively worded and important in recorded history. Abraham Lincoln would later call it “a rebuke and a stumbling block to tyranny and oppression.”

The introduction eloquently begins to make the case.

“The unanimous Declaration of the thirteen united States of America, When in the Course of human events, it becomes necessary for one people to dissolve the political bands which have connected them with another, and to assume among the powers of the earth, the separate and equal station to which the Laws of Nature and of Nature’s God entitle them, a decent respect to the opinions of mankind requires that they should declare the causes which impel them to the separation.”

The next few sentences are among the most famous — and inspiring — in the annals of persuasive prose.

“We hold these truths to be self-evident, that all men are created equal, that they are endowed by their Creator with certain unalienable Rights, that among these are Life, Liberty and the pursuit of Happiness. — That to secure these rights, Governments are instituted among Men, deriving their just powers from the consent of the governed, — That whenever any Form of Government becomes destructive of these ends, it is the Right of the People to alter or to abolish it, and to institute new Government, laying its foundation on such principles and organizing its powers in such form, as to them shall seem most likely to effect their Safety and Happiness.”

The formal adoption of the Declaration is considered America’s founding date. It is why we have parades and fireworks on July 4, implementing the suggestions espoused by Adams in a letter to his wife, Abigail: “It ought to be solemnized with Pomp and Parade, with Shews, Games, Sports, Guns, Bells, Bonfires and Illuminations from one End of this Continent to the other from this Time forward forever more.”

Skirmishes between Patriots and British soldiers and Loyalists had taken place since April 1775 — including the Battle of Moore’s Creek Bridge near Wilmington on Feb. 27, 1776 — but the American Revolutionary War officially began with the Declaration.

Independence would be hard fought, though. The conflict raged until Oct. 17, 1781, when British General Charles Cornwallis surrendered to American General George Washington at the Battle of Yorktown. The new nation was officially recognized with the signing of the Treaty of Paris on Sept. 3, 1783.

Four years later, the United States had its governing document. On Sept. 17, 1787, the Constitutional Congress — presided over by Washington — approved the U.S. Constitution. It gained the force of law on June 21, 1788, when New Hampshire became the ninth of the 13 states to ratify it.

The Constitution, written by James Madison, is a remarkable document that, like the Declaration before it, includes stirring language familiar to every schoolchild and student of American history.

“We the People of the United States, in Order to form a more perfect Union, establish Justice, insure domestic Tranquility, provide for the common defence, promote the general Welfare, and secure the Blessings of Liberty to ourselves and our Posterity, do ordain and establish this Constitution for the United States of America.”

The document was still evolving, however. The Massachusetts Compromise, agreed to in February 1788, called for amendments that would provide protection for civil rights including freedom of speech, religion and press. The Bill of Rights, containing the first 10 amendments, was ratified on Dec. 15, 1791.

The document limited the powers of the new government, ensuring it would not become as oppressive as the old one. As Madison put it in the preamble, “The Conventions of a number of the States, having at the time of their adopting the Constitution, expressed a desire, in order to prevent misconstruction or abuse of its powers, that further declaratory and restrictive clauses should be added: And as extending the ground of public confidence in the Government, will best ensure the beneficent ends of its institution.”

The founding documents, known collectively as the Charters of Freedom, are on permanent display in the Rotunda of the National Archives building in Washington, D.C., where they are viewed by hundreds of thousands each year.

In 2011, the visitors included Vance and Mary Jo Patterson from Burke County. Reading the words penned by the Founding Fathers was an emotional experience.

The experience prompted an idea. Admittance to the National Archives is free, but it can be difficult to make the trek to D.C. What if it was possible to take the documents to the public?

The Pattersons formed a nonprofit called Foundation Forward with a mission to “teach and preserve American history and civics, so all will know how our government is meant to serve and protect We the People,” the organization’s website says.

The mission would be accomplished by installing replicas of the Charters of Freedom in public places. The first installation took place in Burke County in 2012. More followed, in North Carolina, South Carolina, Kentucky, Indiana, Illinois, Nebraska, South Dakota, Virginia, and Nevada.

In April, the replica documents came to the Cape Fear Region, when Foundation Forward’s 34th installation was dedicated at the Brunswick County Courthouse in Bolivia.

“The documents represented here secured the freedom and rights of the American people and will educate and preserve American history,” Vance Patterson said at the dedication ceremony. “Imagine, if you will, school teachers bringing their third, fourth and fifth-grade classes for annual field trips to learn a little about our founding fathers, the history surrounding the beginning of our country, and how the government is meant to serve and protect We The People.”

The memorial is located outside the courthouse, accessible to area residents and visitors around the clock, every day of the year.

But perhaps the best time to see them is in the month when we celebrate America’s birthday. On the 245th anniversary of the nation’s founding, it’s worth making the short drive to Bolivia to read the words penned by the Founding Fathers, words that set forth the ideals that make the United States unique, and have inspired generations.