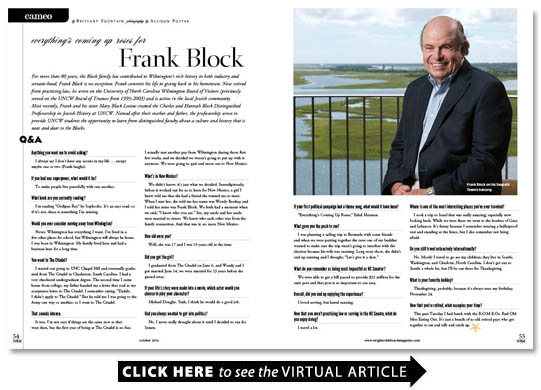 For more than 80 years the Block family has contributed to Wilmington s rich history in both industry and servant-hood; Frank Block is no exception. Frank commits his life to giving back to his hometown. Now retired from practicing law he serves on the University of North Carolina Wilmington Board of Visitors (previously served on the UNCW Board of Trustees from 1995-2003) and is active in the local Jewish community. Most recently Frank and his sister Mary Block Levine created the Charles and Hannah Block Distinguished Professorship in Jewish History at UNCW. Named after their mother and father the professorship serves to provide UNCW students the opportunity to learn from distinguished faculty about a culture and history that is near and dear to the Blocks.

Anything you want me to avoid asking?

I always say I don t have any secrets in my life — except maybe one or two (Frank laughs).

If you had one superpower what would it be?

To make people live peacefully with one another.

What book are you currently reading?

I m reading  Oedipus Rex  by Sophocles. It s an easy read; or if it s not there is something I m missing.

Would you ever consider moving away from Wilmington?

Never. Wilmington has everything I want. I ve lived in a few other places for school but Wilmington will always be home. I was born in Wilmington. My family lived here and had a business here for a long time.

You went to The Citadel?

I started out going to UNC Chapel Hill and eventually graduated from The Citadel in Charleston South Carolina. I had a very checkered undergraduate degree. The second time I came home from college my father handed me a letter that read as my acceptance letter to The Citadel. I remember saying   Daddy I didn t apply to The Citadel.  But he told me I was going to the Army one way or another; so I went to The Citadel.

It was. I m not sure if things are the same now as they were then but the first year of being at The Citadel is no fun. I actually met another guy from Wilmington during those first few weeks and we decided we weren t going to put up with it anymore. We were going to quit and move out to New Mexico.

What s in New Mexico?

We didn t know; it s just what we decided. Serendipitously before it worked out for us to leave for New Mexico a girl I knew told me that she had a friend she wanted me to meet. When I met her she told me her name was Wendy Barshay and I told her mine was Frank Block. We both had a moment when we said   I know who you are.  See my uncle and her uncle were married to sisters. We knew who each other was from the family connection. And that was it; no more New Mexico.

How old were you?

Did you get the girl?

I graduated from The Citadel on June 6 and Wendy and I got married June 14; we were married for 53 years before she passed away.

If your life s story were made into a movie which actor would you choose to play your character?

Michael Douglas. Yeah I think he would do a good job.

Had you always wanted to get into politics?

No. I never really thought about it until I decided to run for Senate.

If your first political campaign had a theme song what would it have been?

What gave you the push to run?

I was planning a sailing trip to Bermuda with some friends and when we were putting together the crew one of my buddies wanted to make sure the trip wasn t going to interfere with the election because his wife was running. Long story short she didn t end up running and I thought   Let s give it a shot.

What do you remember as being most impactful as NC Senator?

We were able to get a bill passed to provide $32 million for the state port and that port is so important to our area.

Overall did you end up enjoying the experience?

I loved serving but hated running.

Now that you aren t practicing law or serving in the NC Senate what do you enjoy doing?

I travel a lot.

Where is one of the most interesting places you ve ever traveled?

I took a trip to Israel that was really amazing; especially now looking back. While we were there we went to the borders of Gaza and Lebanon. It s funny because I remember wearing a bulletproof vest and standing at the fence but I also remember not being afraid.

Do you still travel extensively internationally?

No. Mostly I travel to go see my children; they live in Seattle Washington and Charlotte North Carolina. I don t get out to Seattle a whole lot but I ll be out there for Thanksgiving.

What is your favorite holiday?

Thanksgiving probably because it s always near my birthday November 24.

Now that you re retired what occupies your time?

This past Tuesday I had lunch with the R.O.M.E.Os Real Old Men Eating Out. It s just a bunch of us old retired guys who get together to eat and talk and catch up.