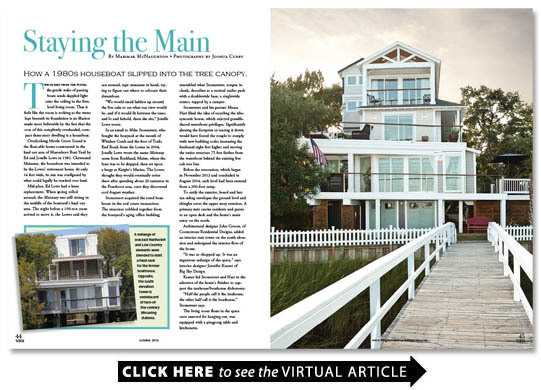 How a 1980s houseboat slipped into the tree canopy.

Twelve feet from the water the gentle wake of passing boats sends dappled light onto the ceiling in the first-level living room. That it feels like the room is rocking as the water laps beneath its foundation is an illusion made more believable by the fact that the core of this completely overhauled compact three-story dwelling is a houseboat.

Overlooking Myrtle Grove Sound is the float-able home constructed in the haul out area of Masonboro Boat Yard by Ed and Jonelle Lowe in 1981. Christened Mainstay the houseboat was intended to be the Lowes  retirement home. At only 14 feet wide its size was configured by what could legally be trucked over land.

Mid-plan Ed Lowe had a knee replacement. When spring rolled around the Mainstay was still sitting in the middle of the boatyard s haul out area. The night before a 100-ton crane arrived to move it the Lowes said they ran around tape measures in hand trying to figure out where to relocate their dreamboat.

We would stand ladders up around the live oaks to see what our view would be and if it would fit between the trees; and lo and behold there she sits   Jonelle Lowe wrote.

In an email to Mike Stonestreet who bought the boatyard at the mouth of Whiskey Creek and the foot of Trails End Road from the Lowes in 2004 Jonelle Lowe wrote the name Mainstay came from Rockland Maine where the boat was to be shipped then set upon a barge at Knight s Marine. The Lowes thought they would eventually retire there after spending about 20 summers in the Penobscot area once they discovered cool August weather.

Stonestreet acquired the treed boathouse in the real estate transaction. The structure cobbled together from the boatyard s aging office building resembled what Stonestreet tongue in cheek describes as a vertical trailer park with a doublewide base a singlewide center topped by a camper.

Stonestreet and his partner Maura Hart liked the idea of recycling the idiosyncratic house which enjoyed grandfathered waterfront privileges. Significantly altering the footprint or tearing it down would have forced the couple to comply with new building codes increasing the freeboard eight feet higher and moving the entire structure 75 feet farther from the waterfront behind the existing live oak tree line.

Before the renovation which began in November 2013 and concluded in August 2014 each level had been entered from a 200-foot ramp.

To unify the exterior board and batten siding envelopes the ground level and shingles cover the upper story exteriors. A primary stair carries residents and guests to an open deck and the home s main entry on the north.

Architectural designer John Croom of Cornerstone Residential Designs added an interior stair tower on the south elevation and redesigned the interior flow of the home.

It was so chopped up. It was an ingenious redesign of the space   says interior designer Jennifer Kraner of Big Sky Design.

Kraner led Stonestreet and Hart in the selection of the home s finishes to support the treehouse/boathouse dichotomy.

Half the people call it the treehouse the other half call it the boathouse   Stonestreet says.

The living room floats in the space once reserved for hanging out was equipped with a pingpong table and kitchenette.

Now buffered by a fireplace on the north elevation rehabbed full-length shutters block the south view of New Hanover County s public boat ramp. When the landscaped bamboo screen matures between the house and fence the shutters will open a crack to emit a flood of daylight into the open area that combines kitchen and living areas with a dining room nestled into its own alcove.

A soft palette of water colors marled oyster shell neutrals and blonde woods are mirrored in glass tile squares around the hearth and glass subway tile rectangles around the kitchen counter backsplash. Nautical themes are subtly reiterated in statement pieces like an oversized stainless steel porthole mirror in the powder room.

On the second floor landing horizontal laid boards lacquered to a high gloss separate the wainscot from the upper wall a gallery for framed nautical prints and navigational maps.

Standing in the threshold Kraner says   This is the beginning of the treehouse effect.

Hart says   That s what Aidan said when he went to bed the first time �Mom it just seems like I m up in the trees.

Aidan shares a Jack and Jill bathroom once the boathouse head formerly equipped with a one-stall shower and a hanging toilet with the waterfront guest suite.

Overnight guests are treated to elevated views of the sound from floor-to-ceiling glass doors that slide open to a balcony. Deck rails are wood capped and wrapped in hog wire adding an industrial finish to the coastal cottage wrapper.

The penthouse camper the master suite occupies the top floor and includes a full bath walk-in closet and a home office. Elevated views of the Carolina archipelago are captured from its sliding doors and balcony where the eye may stretch between navigation beacons — north to Wrightsville Beach and south as far as Carolina Beach Inlet.

With one elevation tethered to the terra firma mainland the dock extends 160 feet into the water. Their personal fleet includes a 14-foot runabout Scout and a 29-foot 290 Everglades Pilot with a fully enclosed center console for cruising.

This is absolute paradise   Stonestreet says.