Best of Homes of Distinction 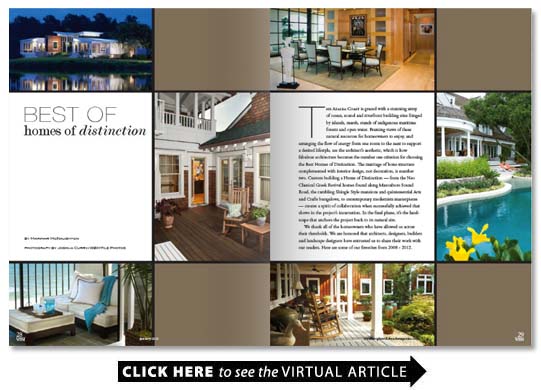 The Azalea Coast is graced with a stunning array of ocean sound and riverfront building sites fringed by islands marsh stands of indigenous maritime forests and open water. Framing views of these natural resources for homeowners to enjoy and arranging the flow of energy from one room to the next to support a desired lifestyle are the architects aesthetic which is how fabulous architecture becomes the number one criterion for choosing the Best Homes of Distinction. The marriage of bone structure complemented with interior design not decoration is number two. Custom building a Home of Distinction — from the Neo Classical Greek Revival homes found along Masonboro Sound Road the rambling Shingle Style mansions and quintessential Arts and Crafts bungalows to contemporary modernists masterpieces — creates a spirit of collaboration when successfully achieved that shows in the projects incarnation. In the final phase its the landscape that anchors the project back to its natural site.

We thank all of the homeowners who have allowed us across their thresholds. We are honored that architects designers builders and landscape designers have entrusted us to share their work with our readers. Here are some of our favorites from 2008 – 2012.

An arcaded loggia moors this dwelling to its setting evoking the stylish architecture favored by Pembroke and Sarah Jones who in 1909 built a lodge of mythic stature near these grounds. The home of Tom and Sue Mobley is a toast to the Joneses and a fitting architectural tribute to the adventurous spirit of explorer Giovanni de Verrazzano who is believed to have made landfall near this spot in the winter of 1524. Framing views of the Intracoastal Waterway interior rooms seemingly float in space.

The architects conundrum is both a puzzle and a solution smudging the lines between formal and informal inside and outdoors framing the inherent beauty of the golf course site while judiciously screening the contemporary home from its tightly knit traditional neighbors. From the edge of the lap pool through the sunken living room to the lake bank beyond this seamless integration of the site and the structure earned this project North Carolina Modernist Houses Matsumoto Prize Peoples Choice Award in 2013.

The lull of the ocean and the majesty of its views is a spellbinding life force welcomed indoors through a bank of glazed doors and windows across the east wall masked in sheer drapes. Inside this reversed floorplan beach house/house at the beach blue is a happy color for homeowner Melanie Williams. The interior is inspired by Caribbean island vacations spent boating fishing and scuba diving.

It is a Craftsman-style cottage in the truest sense of the word. More than 50 contractors artists artisans cabinetmakers furniture makers carpenters framers builders and installers had their hands on this project. From the shaded entry allee designed by Wrightsville Beach Landscaping principal Mike Carter to the interior custom furnishings fabricated by Coastal Cabinets Mike Powell every detail was meticulously rsearched including the glittering collection of regional art.

The fiction of the house beginning with the central structure blends the owners aesthetic wish for an English country house with their architects signature Arts and Crafts elements embellished with graceful curved arches and trellised walkways porticos and a white picket fence. The interior palette is a soothing white-on-white layered with heirlooms antiques and artifacts white-washed wood and wicker and slipcovered upholstery placed over bare cobbled brick and hardwood floors.

Breezes traveling from ocean to land across waterway to marsh meet on a spit of sand at Ligon Point where on one of the last unbuilt lots on Figure Eight Islands backside the late Ligon Flynn designed his last project. At the core of the 12 000-square-foot home Flynn envisioned a central unconditioned area with no heat or air around which outdoor porches and balconies were placed and living cooking eating sleeping and bathing chambers were arranged.

The floorplan of this contemporary homes supports the wandering of guests from the private art gallery into a corridor. The corridors glazed exterior doors open onto a covered porch. Porch steps lead into a secluded courtyard constructed around an aging live oak tree. Looking back at the home from the courtyard the gallery sparkles like a faceted gemstone inviting guests to float into and out of Mort and Judy Nebletts stunning Hewletts Creek home.

Antebellum architecture inspired a Neo-Classical Greek Revival mansion on Masonboro Sound. A graceful curved stair with Jeffersonian spindles and a custom-turned newel post reiterates the acanthus leaf theme found in column capitals. Across this threshold guests are ushered into rooms influenced by an English tavern a New Orleans plantation and a Colonial kitchen. We loved this house so much we featured it a second time in Wonderful Winter by Shannon Darrough December 2011.