Cameo: Art with an Agenda 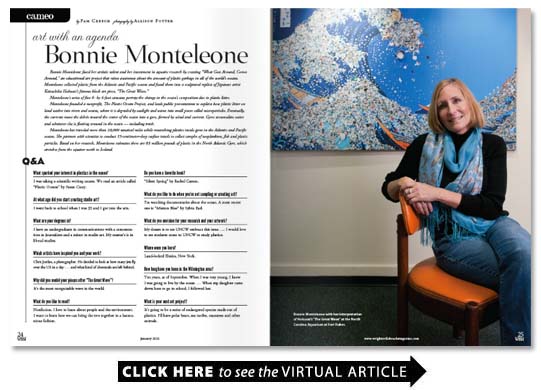 Bonnie Monteleone fused her artistic talent and her investment in aquatic research by creating What Goes Around Comes Around an educational art project that raises awareness about the amount of plastic garbage in all of the worlds oceans. Monteleone collected plastic from the Atlantic and Pacific oceans and fused them into a sculptural replica of Japanese artist Katsushika Hokusais famous block art piece The Great Wave.

Monteleones series of five 4- by 6-foot canvases portray the change in the oceans composition due to plastic litter.

Monteleone founded a nonprofit The Plastic Ocean Project and leads public presentations to explain how plastic litter on land washes into rivers and oceans where it is degraded by sunlight and waves into small pieces called microparticles. Eventually the currents move the debris toward the center of the ocean into a gyre formed by wind and current. Gyres accumulate water and whatever else is floating around in the ocean — including trash.

Monteleone has traveled more than 10 000 nautical miles while researching plastics inside gyres in the Atlantic and Pacific oceans. She partners with scientists to conduct 15-centimeter-deep surface trawls to collect samples of zooplankton fish and plastic particles. Based on her research Monteleone estimates there are 83 million pounds of plastic in the North Atlantic Gyre which stretches from the equator north to Iceland.

What sparked your interest in plastics in the ocean?

I was taking a scientific writing course. We read an article called Plastic Oceans by Susan Casey.

At what age did you start creating studio art?

I went back to school when I was 35 and I got into the arts.

What are your degrees in?

I have an undergraduate in communications with a concentration in journalism and a minor in studio art. My masters is in liberal studies.

Which artists have inspired you and your work?

Chris Jordan a photographer. He decided to look at how many jets fly over the US in a day . . . and what kind of chemicals are left behind.

Why did you model your pieces after The Great Wave?

Its the most recognizable wave in the world.

Nonfiction. I love to learn about people and the environment. I want to learn how we can bring the two together in a harmonious fashion.

Do you have a favorite book?

What do you like to do when youre not sampling or creating art?

Im watching documentaries about the ocean. A most recent one is Mission Blue by Sylvia Earl.

What do you envision for your research and your artwork?

My dream is to see UNCW embrace this issue. I would love to see students come to UNCW to study plastics.

Where were you born?

How long have you been in the Wilmington area?

Ten years as of September. When I was very young I knew I was going to live by the ocean. When my daughter came down here to go to school I followed her.

What is your next art project?

Its going to be a series of endangered species made out of plastics. Ill have polar bears sea turtles manatees and other animals.

Do you plan to work on any film projects?

Yes Im working on one now called If the Ocean Could Talk. Its directed toward middle school students.

Do you ever present for small children?

One of my favorite presentations was for preschoolers at the Carolina Friends School in town. I used sea animal puppets.

What do you think the people of New Hanover County can do to help solve the problem of plastic litter in the ocean?

I see there are regular beach cleanups that go on. I would love to see a way for people to recycle some of the toys that are left on the beach. A lot of people leave childrens toys on the beach thinking Oh thatll be nice for another kid who comes along but really theyre just allowing wind or high tide to push it into the sea.

Where have you been for research sampling?

Bermuda Rio de Janeiro and the islands around it South Africa and Fiji Islands.

Do you have a favorite place to sample?

Whats been your projects greatest challenge?

Keeping up with the demand. Im kind of a one-man show. Also its been a challenge keeping up with all the different ways we can look at plastics and coming up with concepts on how we can clean up the ocean.