Bee the Solution: Back to Nature Series 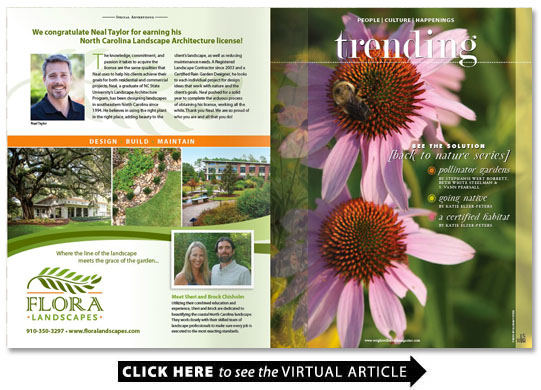 Why all the buzz about a pollinator garden?

Pollinator gardens are areas cultivated with a variety of flowering plants in many colors shapes and sizes. Ideally they bloom at different times of the year and are planted to effectively attract pollinators in clumps instead of individually.

Butterflies — especially monarchs — bees moths hummingbirds and bats are all pollinator species that contribute significantly to our food supply system. Many foods like fruits vegetables and nuts rely on these species to spread pollen from plant to plant in order to reproduce. (Other plants like grains rely on wind-borne pollen.) Due to precipitous declines in pollinator populations fewer individuals are left to perform the work that millions used to do and it simply is not possible to pollinate as many plants with these losses.

Honeybee populations have steadily declined for a decade and in 2014 the number of monarch butterflies migrating south was the lowest ever recorded. As a result President Barack Obama asked all federal agencies to promote the health of honeybees and other pollinators across the country.

“For monarch populations to rebound it is vital that we act now ” said John Ann Shearer Partners for Fish and Wildlife State Coordinator for the U.S. Fish and Wildlife Services. “So much of their habitat has been lost in our state due to development and regular mowing.”

Because of their massive migration from Canada to Mexico and back each year monarch butterflies are extremely important pollinators. They must regularly feed on nectar from plants in order to make the 3 000-mile journey and in so doing pollinate millions of plants along their way.

No other species is able to perform such an enormous task and monarchs are able to reach plants in more remote areas where other pollinators aren’t as abundant. Providing safe havens full of food places to rest and water and milkweed upon which to lay their eggs is an important part of helping to preserve this hard-working species.

Consequently Fish and Wildlife selected the Coastal Land Trust to administer a grant to help organizations across North Carolina plant native species that attract and provide a safe haven for pollinators. The Everett Creek Preserve in Onslow County is just one of several gardens that will benefit pollinators. Under this partnership the North Carolina Botanical Garden in Chapel Hill will grow and distribute milkweed starters; the Coastal Federation will establish a one-fourth acre butterfly garden at their EarthWise Farm in Carteret County; and the Mecklenburg County Division of Nature Preserves and Natural Resources will enhance some of their native prairies with milkweed plants.

See “The Tastes of Honey” by Lindsay Kastner on page 90 to learn more about honeybees as pollinators.

Looking out of my window and squinting I momentarily pretend I’m not sitting in my air-conditioned home typing. Instead I’m minutes from getting up and taking a long walk through an open field strewn with flowers.

The horticultural industry of which I’m a part thrives on new introductions — cultivars selected from the species for their flashy colors or long bloom times interspecific hybrids that improve vigor and yield and even crosses between entirely different types of plants — intergeneric hybrids. Echibeckia a cross between rudbeckia and echinacea is all the rage this year.

As for me my eye has always been drawn more to wildflowers blooming along the roadsides than uniform rows of begonias surrounding a real estate sign.

It’s probably tedious when I am a passenger on a car trip. I mark the seasons by which “weeds” are in flower and the entire ride is punctuated by me poking the driver and saying “Look at the Joe-Pye weed blooming!”

“There are sunflowers over there.”

“Hey — seems like that cold snap has set the sweetgums on fire!”

A few years ago a load of compost proved too much for even our massive flowerbeds to absorb so I carted wheelbarrows full to the sunniest corner of the yard. It was finally an excuse to begin working on the kind of garden I’d dreamed of for years — one filled with black-eyed Susans and coneflowers verbena and agastache switchgrass and summersweet shrubs. In other words: a native plant garden in my own front yard.

The garden is filled with wild columbine and Solomon’s seal heuchera cultivars and sweetspire bushes — dainty and lush shade-lovers. But there’s nothing compared to the way panicum virgatum ‘Shenandoah’ (the aforementioned switchgrass) absolutely glows when the sunlight shines through it or the way the gaillardia and coreopsis catch fire in the hour just before twilight.

Native plants you see are just as gorgeous if not more so than their cultivated and growth-regulated cousins. Most stories about natives focus on their value to wildlife — and that’s a large benefit to growing them — but I love their wild beauty.

For those living in neighborhoods with strict HOA bylaws that frown upon tearing up large patches of lawn and installing sweeps of milkweed all is not lost. A resurgence of interest in natives has led to these indigenous plants being observed and selections propagated that have tidier growth habits better suited to suburbia.

Caryl Bland waves her hand at a small 10-foot pond ringed with ferns and horsetail.

“This is my mud puddle ” she says.

A giant metal dragonfly sculpture emerges from somewhere in the center echoing the smaller living versions flitting around and occasionally pausing on a flower their iridescent blue wings visible for a moment before they’re off to eat another insect.

“We were bringing in a load of topsoil to fill in the pool that used to be in the backyard back when we bought the house and I told the truck driver not to park there but of course he did and got stuck. So I called a friend with a tractor to dig it out and I said ‘You might as well just keep digging. It’ll be a pond ‘” Bland says.

Her garden grows under longleaf pines and tulip trees bordered on one side by the salt marshes of Hewletts Creek. A humid breeze blows from the water to the spacious deck lined with bonsai trees perched on the railings and dotted with large plumeria and hibiscus plants in pots. The air gently stirs wind chimes hanging from the pergola. Bland’s husband Bill makes them from recycled wine bottles.

In the quiet a woodpecker looking for lunch knocks on a tree trunk; a blue jay calling its mate shrieks.

After almost 40 years in the house by the creek several hurricanes that produced whitecaps rolling through the yard and buckets of sweat the Blands almost accidentally created an oasis for wildlife as well as for themselves.

Bland a preschool teacher says she planted fennel for the swallowtail caterpillars to eat.

“If I’m lucky they’ll hatch before school is out for the year and my students can watch them turn into butterflies to release. It’s just a miracle ” she says.

Water is provided by among other things the mud puddle.

“Those are the carcasses of my Adirondack chairs ” Bland says pointing to a row of furniture parts that make a fence separating a large pumpkin vine from the pathway behind the greenhouse. Large vines shrubs and dead trees — called snags — provide cover and places to hide for wildlife. The yard is sectioned into garden rooms by large flower beds filled with phlox black-eyed Susans native hibiscus coleus tomato plants and ferns — a kaleidoscope of colorful plants both native and introduced all of which function as shelter for birds and small mammals.

Garden gnomes share space with palm-sized spiders that weave webs on an old truck parked under a big staghorn fern. The fern which weighs 250 pounds overwinters in the greenhouse.

“I have to talk my son into helping Bill move it ” Bland says. It lives alongside giant orchid plants so old and enormous they’ve grown into the greenhouse bench.

Can a garden be a family room? This one is.

Whether an egret or a skink garden spider or hummingbird returning child or old friend everyone and everything is welcome at the Bland household.

The Bland family’s yard is a newly certified National Wildlife Federation (NWF) official Certified Wildlife Habitat?. But they didn’t plan it that way.

“Oh heavens no!” Bland says. “This is the garden and yard I can afford and talk Bill into helping with.”

Their daughter applied for the certification as a Mother’s Day and Father’s Day gift.

“There’s a sign over here ” Bland says. She walks over to a pine tree and gazes up at it. “There are certain things you have to include.”

Want to get the look and have a native garden in bloom from spring through frost? Plant these (listed in order of bloom sequence):

Native plants are easier than ever to find for purchase. In the Wilmington region Shelton Herb Farm has a big selection of perennials. Visit the Saturday Wilmington Riverfront Farmers’ Market and find Duane Truscott with a selection of hard-to-find native perennials and shrubs for sale as well. One can also visit the North Carolina County Cooperative Extension at the New Hanover County Arboretum.