BY By Meghan Barnes 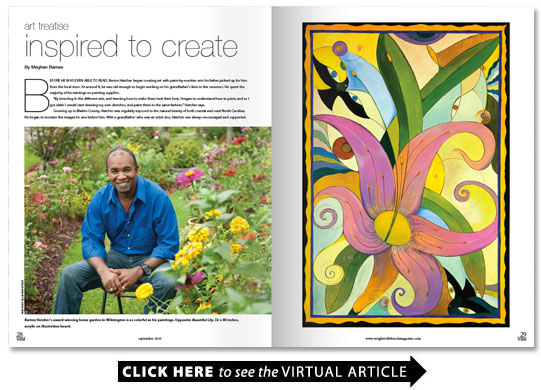 Before he was even able to read Barton Hatcher began creating art with paint-by-number sets his father picked up for him from the local store. At around 8 he was old enough to begin working on his grandfather’s farm in the summers. He spent the majority of his earnings on painting supplies. “By investing in the different sets and learning how to make them look their best I began to understand how to paint and as I got older I would start drawing my own sketches and paint them in the same fashion ” Hatcher says.

Growing up in Bladen County Hatcher was regularly exposed to the natural beauty of both coastal and rural North Carolina. He began to recreate the images he saw before him. With a grandfather who was an artist also Hatcher was always encouraged and supported.

“I was born in a really rural area. So you didn’t find a lot of people who worked in creative fields or created artwork ” he says. “When I think back to my grandfather and all of the things that he created some of the things were incredible. He was like me he just had a need to create stuff. I don’t know if he would call it art but it was art.”

It was his grandfather who once built a child-sized playhouse out of old matches and Popsicle sticks for his grandchildren who provided the inspiration.

“My younger brother and I with other kids on our street would make toys ourselves and create games around them. I used to make model ships by myself and paint designs on the toys that we created ” he says.

Hatcher grew from his self-taught beginnings to become an established artist whose work has been showcased in several North Carolina galleries. He is opening a new studio at Artworks in Jacksonville.

Like many artists Hatcher began painting with watercolors because they were readily available. He transitioned to oils but found they forced him to spend too much time on a painting. Now acrylics allow him to quickly execute his ideas.

“I love acrylics so I can paint and put on canvas what I am seeing in my head ” he says.

His works mirror the French-Caribbean folk art seen in New Orleans and are reminiscent of Airlie Gardens artist Minnie Evans’ work. The vibrant colors matched with the harsh thick black lines of his recent paintings create depth and coloring that parallels stained-glass windows.

But perhaps unexpectedly Hatcher says his greatest inspiration is Michelangelo.

“Ever since I was old enough to own and check out books from the library I would find everything I could on him even if it was just a small chapter in a large book. I have always been fascinated by him ” he says.

“There was a point in my life that I did a lot of paintings that I thought were similar to what Michelangelo did a lot of figures and people from the Bible. About four years ago I was lucky enough to take a 12-day trip to Venice Florence and Rome to visit the works of my favorite artist.”

Much like his favorite artist Hatcher constantly pushes to evolve his personal style.

“If you look at my paintings and what I have done over the years around 70 percent is represented by things I see in nature ” Hatcher says. “My painting style has changed. Right now I like to think of my work as more contemporary abstract. I would say my earlier work was more traditional. Now I tend to use a lot more color. The work has very clean lines and bold color.”