BY by Mat Batts 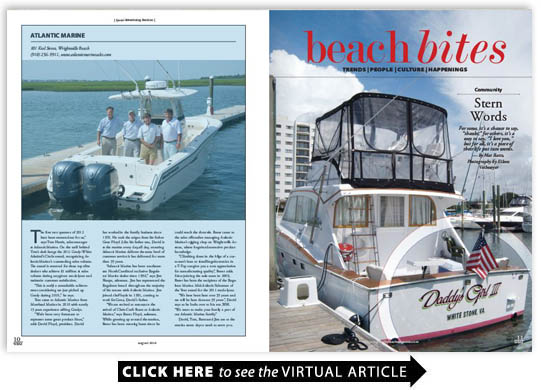 For some its a chance to say thanks; for others its a way to say I love you but for all its a piece of their life put into words.

Naming boats has evolved into a craft almost as elaborate as the boat it is painted onto but it is oftentimes the story behind the name that tells the most about its owner.

Bridge Tender Marina dock master Tripp Brice estimates that people began naming boats as early as the 1400s christening them for royalty for Queen Isabella of Spain for example. Boat owners today still regard the naming of their boat after a woman to bring good luck.

Theres a lot of thought that goes into it Brice says. A lot of times … theres some kind of polarity to it.

Along with the use of womens names for the vessel boat owners use the name gold leafed on their boats transom as a way to share a piece of their lives.

Oftentimes its occupational how they made the money to buy the boat says Phil Jarrell of Seapath Marina.

The names that seem to catch our eyes the most are often those that are unique or quirky in nature. Brice says he wont forget the names Hy Banx for a family of NASCAR owners and Victory Lap for a driver that came through town. Monkey Business raised a few laughs in the marina office for its possible irony and 99 Problems has always been a local favorite.

For Brice though as a fan of duck hunting his boat name Blue Bill fits the bill.