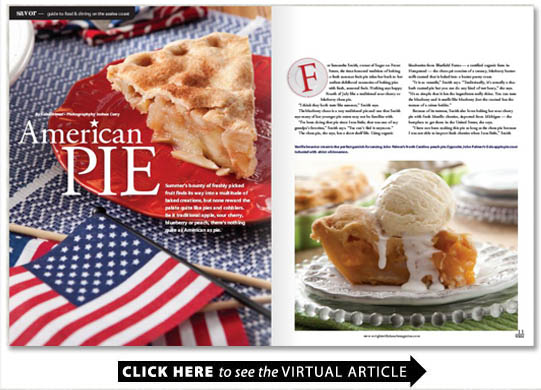 For Samantha Smith owner of Sugar on Front Street the time-honored tradition of baking a fresh summer fruit pie takes her back to her earliest childhood memories of baking pies with fresh seasonal fruit. Nothing says happy Fourth of July like a traditional sour cherry or blueberry chess pie.

“I think they both taste like summer ” Smith says.

The blueberry chess is a very traditional pie and one that Smith says many of her younger pie eaters may not be familiar with.

“I’ve been doing that pie since I was little; that was one of my grandpa’s favorites ” Smith says. “You can’t find it anymore.”

The chess pie she says has a short shelf life. Using organic

blueberries from Bluefield Farms — a certified organic farm in Hampstead — the chess pie consists of a creamy blueberry buttermilk custard that is baked into a butter pastry crust.

“It is so versatile ” Smith says. “Traditionally it’s actually a rhubarb custard pie but you can do any kind of tart berry ” she says. “It’s so simple that it lets the ingredients really shine. You can taste the blueberry and it smells like blueberry but the custard has the texture of a crème brûlée.”

Because of its tartness Smith also loves baking her sour cherry pie with fresh Morello cherries imported from Michigan — the best place to get them in the United States she says.

“I have not been making this pie as long as the chess pie because I was not able to import fresh cherries when I was little ” Smith jokes. “It’s an intense mouthful of cherry flavor — that is why I like this pie so much because it doesn’t taste like anything else.”

Across the deep red cherry filling Smith weaves a traditional lattice crust made from fragile butter pastry brushed with cream and granulated sugar.

John Palmer of Great Harvest Bread Company says he goes easy on the sugar and the crust he typically uses in his pies is a traditional recipe to accompany the myriad of fresh fruit combinations that he selects from what is in season.

Although Palmer says his crust may be the same one your grandmother may make he chooses to use about half of the sugar that most traditional recipes call for.

“My pies are totally traditional but I want the fruit to be the main taste ” he says.

The fresh peaches Palmer picks up from vendors at area farmers’ markets are indeed the focal point in his lush peach pie. Palmer says he started making peach pies when he came to North Carolina 18 years ago.

For longer than that about 28 years his hot apple pie has been stuffed full with Gala apple chunks.

Thinking outside the pie 22 North’s Brent Poteat is a trained chef who has been cultivating his pastry palate for the last seven years. Poteat says chopping pecans and making runs to the grocery store for Karo syrup for his great grandmother’s pecan pies are his earliest food memories. Poteat has carried the influences and experiences he gained from cooking with his great grandmother and grandmother into his own pies while also looking for ways to add variations to classics.

In the heat of the summer Poteat loves to use fresh blueberries from Lewis Farms for a light and fruity summer dessert indulgence. With an eye to the cousin of the pie — the cobbler — Poteat tops his blueberry pie with a browned oatmeal and cinnamon crumble that complements the juicy sweet blueberries.

“This is obviously a time for fresh blueberries and that particular pie I think is a really good example of what you can do with local blueberries ” Poteat says of his creation. “However a lot of times we want to put our own individual twist on it and I will have something else in mind like cobbler in the case of this one.”

Despite his nontraditional application of a cobbler topping on a blueberry pie two key ingredients that Poteat uses in his crust and filling — sour cream and tapioca — inspire the pie’s recipe rooted in tradition.

“I like to use tapioca instead of cornstarch to thicken the pie because it is less intrusive flavor wise and it’s a real old school southern thing ” he says. “Something I do differently in mine that I’m sure a lot of grandmothers do is put a little sour cream in it; I think that is real important — the tang that comes with that — and sets it off.”

Like Palmer Poteat also prefers pie to cake. He says it goes so good with milk.