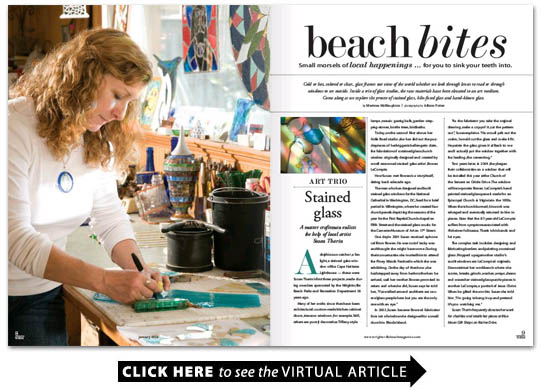 Cold or hot colored or clear glass frames our view of the world whether we look through lenses to read or through windows to see outside. Inside a trio of glass studios the raw materials have been elevated to an art medium. Come along as we explore the process of stained glass kiln-fused glass and hand-blown glass.

A dolphin sun catcher a fan light a stained glass window of the Cape Hatteras Lighthouse these were Susan Tharins first three projects made during one class sponsored by the Wrightsville Beach Parks and Recreation Department 18 years ago.

Many of her works since then have been architectural: custom-made kitchen cabinet doors transom windows for example. Still others are purely decorative: Tiffany-style lamps mosaic gazing balls garden stepping-stones bottle trees birdbaths.

Today on the second floor above her Airlie Road studio she has laid out the puzzle pieces of her biggest challenge to date the fabrication of a stained glass church window originally designed and created by world renowned stained glass artist Rowan LeCompte.

How Susan met Rowan is a story itself dating back a decade ago.

The man who has designed and built stained glass windows for the National Cathedral in Washington DC lived for a brief period in Wilmington where he created four church panels depicting the seasons of the year for the First Baptist Church chapel on Fifth Street and the stained glass oculus for the Cameron Museum of Art on 17th Street.

One day in 2001 Susan received a phone call from Rowan. He was out of tacky wax and thought she might have some. During their conversation she invited him to attend the Piney Woods Festival in which she was exhibiting. On the day of the show she had stepped away from her booth when he arrived said her mother. Rowan promised to return and when he did Susan says he told her “Ive walked around and there are several glass people here but you are the only one with an eye.”

In 2002 Susan became Rowans fabricator for a set of windows he designed for a small church in Rhode Island.

“As the fabricator you take the original drawing make a copy of it cut the pattern out ” Susan explains. “He would pick out the colors I would cut the glass and make it fit. He paints the glass gives it all back to me and I actually put the window together with the leading the cementing.”

Two years later in 2004 they began their collaboration on a window that will be installed this year at the Church of the Servant on Oriole Drive. The window will incorporate Rowan LeComptes hand painted stained glass panels made for an Episcopal Church in Virginia in the 1950s. When that church burned his work was salvaged and eventually returned to him in pieces. Now that the 87-year-old LeCompte suffers from symptoms associated with Alzheimers disease Tharin is his hands and his eyes.

The complex task includes designing and fabricating borders and painting on stained glass. Propped up against her studios sunlit windows are LeComptes originals. Downstairs at her work bench where she scores breaks grinds washes wraps cleans and waxes her stained glass puzzle pieces is another LeCompte a portrait of Jesus Christ. When he gifted the work to Susan she told him “Im going to hang it up and pretend its you watching me.”

Susan Tharin frequently donates her work for charities and retails her pieces at Blue Moon Gift Shops on Racine Drive.

Plates of colored glass are racked like dishes. Canisters of glass powders in a rainbow of colors with textures like refined sugars and coarse salts line the shelves. Tubes of glass string rest beside rods of colored glass that will be cut into pieces and fused to paper to form pebbles. Across the length of one wall are grinders and polishing tools.

In the center of the space surrounded by the orderly arrangement of all of her components is Jeri Leigh Dearings workbench. Behind her rests a gleaming new kiln ready to receive the next batch of glass.

These are but some of the raw materials and trade tools that Jeri Leigh uses to craft her exquisite kiln-fused glass art creations.

Though she says she is not inspired by nature she is surrounded by it. Her studio is tucked behind her home on a wooded lot in nearby Rocky Point. Here in the whispering pines Jeri Leigh sifts glass powders onto glass blanks manipulating the pattern with a stylus before baking it in her kiln.

Most of her pieces will make four trips into and out of the kiln before they are finished. In between she grinds and polishes sifts and manipulates. The blank sheets of glass cut into squares or rounds slowly evolve into tiles coasters platters sushi sets and bowls during the slumping process in which the plate of colored textured glass is laid on a plaster mold and baked again. As the glass softens it takes the shape of the mold. When finished her functionally decorative pieces fetch tens hundreds even thousands of dollars.

Though not formally schooled in art Jeri Leigh said she tried almost every medium “trying to find my voice ” she explains. Her introduction to glass was through the creation of stained glass windows but she found the form too restrictive so she cut up all of her stained glass into mosaic-sized tiles and sold them on eBay for other people to make their art. She sampled lampwork making glass beads with a blowtorch but that process was not nearly as fulfilling as the one she finally discovered in fused kiln-formed glass art fanning a passion that has taken her from one masters class to the next across the United States and Canada for the last 11 years.

Influenced by Asian art aesthetics Jeri Leigh experiments with glass the way potters experiment with Raku ware. Starting with a blank like a bisque fired pot she adds glass string glass pebbles and powders. Like Raku firings she is not always certain of the outcome.

“Im trying to push the depth ” she says cradling a deeply pitched bowl that represents the sum total of almost all of her achievements thus far. “Whats hidden inside that might be my surprise.”

One of her signature techniques the splatter bowl is created by the loose slinging of wet glass powders onto blanks and is but one of the processes that has earned accolades from her instructors.

Confessing that she is enthralled with butterflies their colorful papery wings their veins and the flutter of movement as the wings open and close Jeri Leigh Dearing is still emerging. The mother of six children ranging in age from 15 to 35 says “All these people that I really respect have started late in life.”

Jeri Leigh Dearings work can be found at the River to Sea Gallery in Chandlers Wharf.

Burchetta the production glass blowing facility that relocated from West Chester New York to Wilmington North Carolina three years ago is an inferno of furnaces and ovens on Myrtle Grove Sound Road.

With a steel blow pipe Elizabeth Miele gathers a molten orange bulb from a raging 2200 degree Fahrenheit furnace. On one arm she wears a tube sock a shield against the blazing heat.

Her partner John Burchetta pulls a tube sock over his right wrist suiting up to blow a large ruffle bowl. The couple have been blowing glass together for more than 30 years.

He narrates the process from the first gather where an egg-sized bubble forms at the hot end of the blow pipe. Swinging the pipe from the studios hot side to its cool side he blows the glass to twice its diameter then centers and shapes the orb on the marver a flat stainless steel surface eliminating bubbles by rolling it on the table until it resembles a cylinder.

Swinging the pipe back to the furnace to gather again Burchetta pivots around to the marver dipping the hot glass into a trough of jade green shards. On the stainless he rolls the glass bits into the vessel from side to side lifting the pipe to round the top edges.

In between gathering and marvering Burchetta has the choice of adding color or blowing the vessl before he reheats the pipe in a separate chamber set at 2500 degrees Fahrenheit. Seated at a bench he straddles the pipe between two steel arms rolling and centering the hot glass now about 1800 to 1900 degrees. Smoke rises from squared layers of wet newsprint that he rolls over the smooth surface. Wet parchoffi a wooden scoop used for shaping the vessel and jacks resembling wooden tongs used for shaping the base are submerged in a bucket of water.

On the next gather Burchetta blows the egg-sized orb into a melon reheating the pipe to maintain a steady temperature that will prevent the glass from cracking. There are two of these reheating chambers. In one Miele works a punty preparing to drizzle molten pink glass over the bowl as Burchetta turns the pipe. Gathering again and returning to the bench a studio assistant welds tweezers crimpers shears and calipers used for stretching and measuring the vessel pulling bubbles and snipping the end to create an opening. Burchetta shapes and Miele adds another layer of molten pink to the rim.

Burchetta returns the piece to the reheating chamber then swings the pipe sweeping the air above the open floor space twirling the rod to open the face of the vessel then downward using centrifugal force to ruffle the rim of the vessel that blossoms like a flower. Swiftly Burchetta rushes the finished piece to the annealer a computerized cooling chamber where the bowl will sleep overnight at 950 degrees with the temperature lowered in increments until its ready to touch.

Burchettas blown glass may be seen and touched at Blue Moon Gift Shops on Racine Drive.